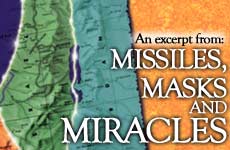 Saddam Hussein, a "reincarnated Babylonian king," ended his evil plan to kill the Jews with a Purim miracle.

By the rivers of Babylon, the Children of Israel sat and wept, and remembered Zion. (Psalms 137:1)

In the seventh century BCE, the Babylonians conquered the Asyrian empire in Mesopotamia. Under the regime of Nebuchadnezzar, Babylonia became the most powerful nation in the world. Nebuchadnezzar ruthlessly attacked his neighbors, annexing them to his own kingdom.

Early in the sixth century BCE, Nebuchadnezzar's army invaded Israel. It met little resistance and quickly ravaged the country. The Babylonians destroyed the First Temple and defiled and pillaged the holy sites. The Jews were conquered, and atrocities were committed. The population was taken captive and exiled to Babylonia, along with their treasures of gold and precious religious artifacts. The stolen wealth from his many conquered neighbors was used to support Nebuchadnezzar's army and build monuments to his own glory. It was in his capital city that Nebuchadnezzar built the legendary Hanging Garden of Babylon. In testimony to his grandeur, each brick was inscribed with Nebuchadnezzar's name.

North of the ancient city of Ur, also on the Euphrates River, lies the biblical city of Babylon. Years ago, Saddam Hussein commissioned archaeologists to restore the city and its Hanging Gardens. Each new brick that was added was inscribed with Saddam's name. This became a powerful symbol for him. Saddam Hussein believed that he was the reincarnation of the great Nebuchadnezzar, and dreamed of restoring the Babylonian empire to its former size and glory.

During the course of the dig, archaeologists uncovered a plaque on the right-hand side of the ancient city gate. This plaque had been placed there by Nebuchadnezzar and proclaimed the ancient ruler's greatness. Saddam ordered stonemasons to place another plaque on the left-hand side of the gate, glorifying the greatness of Saddam Hussein. With his national symbol in place, Saddam then embarked on a campaign of terror in 1990-91, first in Iran, then in Kuwait. Ultimately, he dreamed of recapturing Jerusalem.

The miracles experienced in Israel during the war are too numerous to mention. The newspapers were filled with images of people buried in rubble, yet walking away without a scratch. In all, 39 missiles fell – many in heavily populated areas – causing only two direct deaths. By contrast, one scud missile fell on a U.S. Army barrack in Saudi Arabia, killing tens of U.S. soldiers.

Here is one personal account from Yediot Acharonot, January 20, 1991:

When the siren sounded at about two a.m., Meir and his brothers – neighbors of mine from the building next door – came to me and asked me not to stay at home alone. I guess they figured an old lady like me couldn't take care of herself in the middle of the night. They asked me to return with them to their house to wait out the attack. They said they wanted me to feel more secure. I agreed.

A few seconds later, just as we left my house, and just before we reached theirs, the missile fell in the alley right between my house and theirs, totally destroying both houses.

When one person manages to escape death, we might say they were lucky. When a few people are involved, we are amazed how they cheated fate. When dozens and even hundreds of people walk away from the devastating horror of a missile attack, they have defied all laws of chance and probability.

The Gulf War was a particularly difficult time for new Russian immigrants. As they came down the ramp from the plane, many kissed the ground. Sadly, the first gift they received upon their arrival was a gas mask. Many went immediately to visit friends and relatives who had already settled into their own homes. Most of them chose to live in the center of the country, some in Ramat Gan.

One Russian woman tells her story:

We were staying in a neighborhood in southern Tel Aviv during the first missile attack, visiting with other Russian immigrants who were living in the area. Many of the people in the poorer houses of the neighborhood had not bothered to prepare a sealed room, so when the siren went off we all rushed to the nearby public bomb shelter. The shelter was huge and it was located inside a large public building made of concrete and metal.

About 200 people gathered together to seek shelter inside the formidable building. A number of us moved to the wall on the eastern side of the shelter. If required, that side of the shelter served as a synagogue and the wall was filled with prayer books, Bibles and other Torah books. People were reciting Psalms over the sound of crying babies. And then came the explosion. Everything came crashing down around us. The shelter had taken a direct hit by a missile carrying 550 pounds of explosives. There was a smell of burning sulfur, and a thick cloud of dust filled the room.

Some of the people were thrown into the air. Others had thrown themselves to the ground and were screaming wildly. When the noise stopped and the dust began to clear, the people who had been frozen in shock began to get up and look around. Everyone was totally astonished to see that not one of the 200 people was touched.

The next morning, Prime Minister Yitzhak Shamir visited the area with the Mayor of Tel Aviv. Shamir asked in astonishment if there really were people in the shelter at the time of the attack. Mayor Lahot answered that indeed, there were two hundred, and all were saved by a miracle.

The End Is Just The Beginning

The streets of Tel Aviv are filled with children and adults wearing masks. This time they are not gas masks, but the traditional costumes celebrating the Jewish festival of Purim. People are walking to synagogue, carrying their gas masks in boxes slung over their shoulders. It is the morning of February 28, 1991. Inside the synagogues, the Book of Esther is read aloud. It is the story of a great turn of events for the Jewish people. The wicked viceroy of Persia, Haman, had plotted to murder all the Jews in the kingdom. Through a sequence of inexplicable and miraculous events, the tables were turned, and through the efforts of the Jewish leaders Mordechai and Esther, Haman was hung on the very day that he chose to kill the Jews. For 2,500 years, Purim has been a day to celebrate the triumph of good over evil.

When I returned from synagogue that morning, my children greeted me with singing and laughing. While we had been reading about the destruction of Haman, George Bush had announced that the Allied forces called a ceasefire. My six-year-old asked if they would write a book about Saddam Hussein that would be read in synagogue next year! I smiled. In her own way, she could sense the cycle of history repeating itself.

Later that morning, at 10 a.m., Israeli Brigadier General Nachman Shai announced that everyone could remove the plastic sheeting from their windows and put away their gas masks. The threat of Scud missiles was over. We could start getting back to normal.

I rushed to the bedroom and ripped the brown plastic tape off the door and window frames. In my mind's eye, I again saw my family huddled together in our sealed room only a few days before. A thought occurred that gave me hope for the future. My daughter's comment about Saddam recalled our people's history of 2,000 years of exile. We Jews have been scattered to the four corners of the earth. Wherever we went, we were plagued by persecution, pogroms, and the Holocaust. Ironically, while all the enemies of the Jewish people eventually disappeared, the Jews themselves survived.

I recalled the "all clear" being sounded for the last time. The announcement was made in foreign languages for those who had not yet learned Hebrew. For five minutes, the room was filled with a stream of voices, French, English, Russian, Rumanian and Ethiopian. These were just some of the languages Jews had learned in their long exile. That's when I realized I was witnessing the biggest miracle of all. The Jewish people were finally coming home.

Excerpted from "Missiles, Masks and Miracles" by Charles Samuel.

Manischewitz Jello Mold Recipe
Jews and Jello Molds
The Blue Beyond
Great Place to Live
Is Eating Supposed To Be Spiritual?
Are Jews Against Whistling?
Orphan Visiting Cemetery Before Wedding
Same Pot for Meat and Fish
Reciting Tehillim on Shabbat
Guilt Over Past Sins
1 2 3 … 2,963 Next »