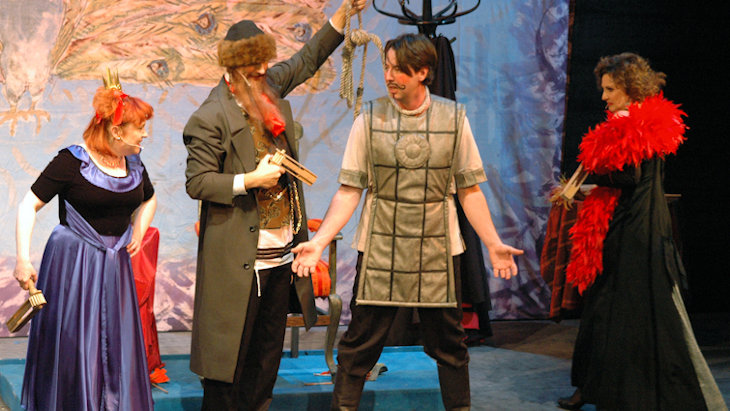 For centuries, shuls have been trying to make their Purim Spiels funny, but to no avail. I’m here to help.

For centuries, shuls have been trying to make their Purim Spiels funny, but to no avail.

So I am here to help you with some Purim Spiel ideas that can be tailored to fit your community. This is the one time of year to pull out your best Don Rickles and share some good laughs that will offend people. If you’re worried about lashon hara, be general so everybody will still know who you’re talking about. When you do the sketch of the family who arrive at shul at 11:55 when services end at 12:00 only to show up for the Kiddush, everyone knows you are talking about the Kimplowitz family.

OK, here are some ideas to help you get started on your shtick:

Anything you do about the rabbi will get a huge laugh. Just pretend you’re giving a sermon and everybody will love it. As you sermonize, use highfalutin English words, like “firmament,” so that nobody will understand.

The rabbi has been there for you for every family event. He’s laughed with you. He’s cried with you. He cares about you. Make fun of him.

The Spiel: Just have somebody trying to walk into the shul. They can’t. It’s impossible. The parents decided to leave the carriages at the entrance of the shul. For this scene, bring everybody to the entrance of the shul and try to walk through the doors. No need for acting. Your frustration will naturally take over, as you trip, fall, throw baby carriages, and put on the slapstick performance of your life.

Kids Running in The Hall

This is your chance to mock the new kind of parenting, where they let the kids raise themselves and interrupt the services. Dad claims, “It’s her decision. She’s already three.”

The Spiel: In the middle of shul, the dad says to his child, “Are you sure you want to interrupt the services?” The child yells, “Yes,” and guess what, the services are interrupted. The dad insists there’s nothing he can do, as he gives the young one a lollipop.

This leads to the Spiel of the kids running shul. Take any scene from Lord of the Flies and add parents who do nothing, you have your Spiel. Imagine parents stranded with the kids in Lord of the Flies, and the parents just sit there and let it happen. That’s my shul.

Everybody flipped the cards, but the shul did not see the money. How? Let’s talk about all the people who haven’t paid their dues. Oh yes, and we’re gonna name names.

The Spiel: We see everybody flipping the money on the cards, claiming they will donate to the shul. Show the least wealthy people flipping over the $18,000 donation. We see their friend reminding them that they haven’t paid their dues yet. Time for the perfect Jewish joke: He responds, “So, nu? If I don’t give this donation, is it such a bad thing?”

You then pull out the list of people who still haven’t paid their dues. Everybody will be on the floor laughing when they say, “It’s so true. The Yitzhakys never pay their dues.”

It will get a laugh.

Even if you can’t do impersonations or accents just say, “I’m Bernie,” and everybody will be on the floor. Once you say it’s Bernie, everybody will be able to respond, “Yeah. That’s Bernie. He sits next to Max. That’s so Bernie, saying his name. Great parody.” Then you can get back to making fun of the rabbi who officiated Bernie’s wedding, while helping you and your spouse work through the rough spots in your marriage.

For a real crowd pleaser, remember to impersonate the rabbi. Remember, any time you make fun of the rabbi, it will get a laugh. Do the rabbi saying “Oy” and the crowd is back on your side. Anything about the rabbi and anything involving a Yiddish style accent are Jewish community comedy gold. Truth is you could do a whole Spiel raising your hands in Jewish Why form, saying “Oy,” and the audience will be on the floor.

Trying to Get the Minyan

The bane of every smaller community congregation is getting a minyan. People don’t show. You’ve got to make phone calls all the time.

The Spiel: Go to different places to find people to join the minyan. The JCC. The laundromat. Bring the minyan to the golf course, where we see five shul members on the twelfth hole, talking about how they are working on themselves spiritually. When asked to help join the minyan they explain that they also need to work on their handicap.

The Shul Police is always a good Spiel premise. They don’t only have to show up at the golf course. The toughest woman from the sisterhood is also on the shul police force and she stops members from eating Kiddush before the blessing. The same lady can also go to the Yitzhaky’s table and makes them pay their dues in real time. When they try to find parents to watch over the kids, they realize that’s impossible. She’s the only one in the Spiel who doesn’t make fun of the rabbi. But that’s because she wants him fired.

The best way to express truth is to share it in laughter. Otherwise, it’s straight-out offensive. Remember, if you run your Spiel right, nobody will want to talk to you for a good couple months.