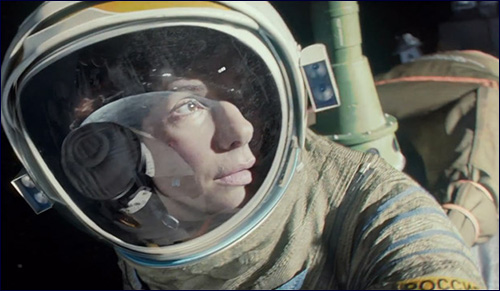 The Torah is like gravity. It keeps us grounded.

Gravity, the new movie starring Sandra Bullock and George Clooney, is literally out of this world.

Watching this movie makes you feel like you’re floating around in space with them.

The movie takes place in space, and follows Sandra Bullock’s character, whose name, Ryan Stone, sounds like a male action hero from the ‘80s, and George Clooney’s character, who is on his last spacewalk before retirement. If movies have taught us anything, it’s that if the guy next to you says it’s his last day before retirement, you should probably just back away. It’s not rocket science.

From the very beginning, the movie is immersive, especially if you see it in 3D and IMAX. It feels like you’re floating around in space with them, except that your feet are stuck to the movie theater floor and you’re sharing at least one armrest with someone you don’t know. It’s also chock full of lessons and metaphors, the very first one being a scary lesson about the consequences of littering. Even in space. You’d think there’d be plenty of, um, space, but it turns out that roughly everything that happens up there takes place in the same basic neighborhood.

But the movie definitely made me appreciate what I have. The stranger sitting next to me gripping the armrest, I guess. And the goo on the floor.

At the beginning of the movie, we find out that the Russians have been blowing up their old spy satellites. But the pieces are hitting other satellites and knocking them out of orbit, and everything’s hurtling around earth at a million miles per hour. And all of a sudden, all that stuff hits the fan, and pretty much cuts it to ribbons. And before Dr. Stone can comprehend the gravity of the situation, she gets flung into space with nothing but a one-size-fits-all spacesuit, a dwindling supply of oxygen, and memories of her late daughter.

It’s interesting that, for a movie called Gravity, there’s almost no gravity. I don’t know why I noticed. Almost every other movie I’ve ever seen has gravity, and I’ve never noticed that. But we tend to notice things more when they’re not there. And in this movie, there’s no gravity. She’s in space, and floating out further and further. That’s the problem.

It turns out that gravity is like oxygen. It’s one of those simple things that we have in abundance that we don’t appreciate until it gets taken away. We all understand how scary it is to not be able to breathe, because we’ve all experienced it. I can’t be the only one who, when he’s watching a movie and a character is about to go under water for a significant amount of time, holds his own breath along with the character to see if he could make it.

I’ve never made it.

But we never really think about that when it comes to gravity. Whenever we think about going into space, the lack of gravity seems to be the best part. We see footage of astronauts floating around and tossing clipboards to each other and falling asleep with their arms floating over their heads. We all want to be astronauts when we grow up, for just that reason. But what we don’t realize is that zero gravity can also be a pain. Down here, we know that if we drop something – a screw, for example – it will go basically in one direction. Down. And it will be relatively easy to get it. We just have to move whatever piece of furniture it rolled under. But imagine if it could go in any direction, you can’t hear where it lands, and if it’s gone, you have to go back down to earth to get another one.

Gravity is predictable and reliable. If a piano falls on you, that’s it. It only falls on you once. Whereas in space, the piano will circle the earth and hit you again. And again.

In space, nothing moves like you expect it to. If you try to grab something, you might just float on past it. And it’s not easy to grab things either, because you’re basically wearing a thick pair of snow pants all over your body. And if you bump into something and don’t grab it right away, you ricochet off in the other direction. If you use a fire extinguisher, the reverb sends you smashing back into a wall.

Not only that, but a lack of gravity is also disorienting, especially in 3D. It turns out that in space, you’re almost always upside down relative to something. I myself won’t even go on an upside-down roller coaster. I’m always afraid of things falling out of my pockets. If I went up into space, I’d be constantly feeling around for my phone, my change, my pens, “Hey, can you float me that pen? I seem to have misplaced mine.” At some point, Stone is floating out there alone, flipping head over heels over head over heels, and you see things from her point of view – earth, stars, debris, earth, stars, debris. And you don’t stop spinning. And all you hear is Sandra Bullock gasping for air. It’s very claustrophobic to be the second person in a spacesuit.

And that’s literally all you hear. Early in the movie, Dr. Stone is asked what her favorite thing is about space. “The silence,” she answers.

But when certain parts of the movie happen in absolute silence, it’s very disconcerting. When something explodes or collides in the movie, your first thought is, “Where’s the noise?” My guess is that anyone watching this movie on DVD will be constantly checking the volume controls to make sure they’re working properly.

I found myself missing the noise. It was scary. As any parent knows, even if the noises your kids are making are annoying, it’s when you no longer hear noise that it’s time to get up and check on them. The second it’s gone, you miss it. And as the movie demonstrates, all you hear is the sound of your own breathing. And warning alarms telling you things you already know.

All these things that we take for granted – oxygen, gravity, basic orientation, noise, our kids – we don’t appreciate them until we don’t have them.

We don’t always appreciate gravity, for example, especially as we age, but gravity itself is not restrictive. We think it is, because it pulls us in one specific direction, but that’s because we’ve never experienced it any other way. We’ve never been in a situation where we’ve missed it. It’s not better to be pulled in EVERY direction, is it? One direction is way less stressful.

The Torah keeps us tethered.

We might think it’s a pain to keep God’s commandments, for example, and that they’re restrictive, and we look out at the world and see everyone else floating around and having a good time and throwing clipboards at each other, but really the commandments are about as restrictive as gravity. And gravity is not that restrictive. We can still go on airplanes and hot air balloons and trampolines, but we keep coming back to earth. Is that restrictive? It keeps us tethered. It keeps us from floating out into space. There’s no telling where we’d end up without it.

And when we didn’t have it, we did miss it. Before we were a nation, God brought us to Egypt to show us what restrictive really means. Restrictive is being forced to build pyramids on quicksand. (Gravity can be a harsh mistress.) We don’t appreciate anything until we’ve seen the alternative. We want to know our options.

Maybe this is why God puts us in difficult situations; so we’ll appreciate the good times. If every day was Shabbos, we wouldn’t appreciate Shabbos.

Want to get away from gravity for a while, and have a cool but terrifying experience that will help you decide to ditch your childhood dream of becoming an astronaut? Go see Gravity. Though if you’re going to see it in 3D, bring a fire extinguisher.

Mossad and Morality on Film

The Jazz Singer, Yom Kippur & the History of Film
Can You Show Me This "God?"
How to Become Immortal
Judaism and Mental Health
Comments
MOST POPULAR IN Jewlarious
Our privacy policy
Aish.com Is Looking for Great Writers