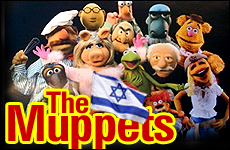 Are The Muppets a metaphor for the State of Israel?!

Watching The Muppets made me think about Israel. I don’t know why.

The movie actually addresses this. In fact, the entire plot of the movie is that it’s been a while since the last Muppet movie, and that the world has forgotten who they are.

But not Walter. To him, they’ve always been heroes.

Walter, who lives in a small town called Smalltown, is a Muppet freak, in that he lives and breathes Muppets. And also in that he’s orange and has protruding eyes and a head that splits at the mouth.

So when his brother, Gary, who is about four feet taller than him and considerably less furry, announces that he and his girlfriend Mary are taking Walter along on their trip to L.A. (they bought him a ticket and everything, even though they could have just packed him into a suitcase) Walter sees this as a chance to visit his Mecca Israel -- The Muppet Studio -- and walk where the guy animating Kermit once walked.

But when he gets there, he goes on the tour and realizes that the whole place is in shambles. The Muppets have long since disbanded and scattered all over the world. He also conveniently hears the bad guy talking about how he’s buying the lot and tearing it down to drill for oil underneath. Walter and his friends need to find Kermit and convince him to track down all of the other Muppets, fix up the theater, and put on a telethon to raise enough money to buy it back and also to remind the world who the Muppets are. And how they aren’t gone, just forgotten.

What does this have to do with Israel?

The Muppets movie proves that you can go home again. But not without your family.

Like the Muppets, the Jewish people lost our “theater.” In the days of King Solomon, nations from around the world would visit us. Our Holy Temple was a focal point. But alas we were exiled from our “theater,” scattered throughout the world. And sometimes, we probably felt about three feet tall.

Sure, some of us landed on our feet. Like the Muppets at the beginning of the movie, we became singers and editors and mechanics and executives of huge used-toilet companies. Some of us were even appointed to powerful positions. And, like Walter, some of us didn’t even realize that we’re Muppets. We might feel a kinship to the other Muppets, but we have no idea why. We might not even remember that there’s even anything to go back to.

Am I saying that Jews are like Muppets? Not necessarily. Sure, we’re short and furry and loveable, we make awkward arm movements when we talk, have a high tolerance for being thrown around, and get to important functions about four minutes before they start, even if we’re the ones hosting those functions. Okay, so maybe we are like Muppets.

In the past 60 years, we’ve picked ourselves up from the worst ashes imaginable, reclaimed our land, and established it as a State. We have the only democracy in the region -- an oasis of joy and laughter in middle of the desert, and we work every day to hold onto that. But we still have a ways to go. In the time we’ve been… not gone, but forgotten, the world has become cynical – it’s moved on and forgotten about our singing and dancing and arm flailing.

But if we all pull together again, we can remind the world of who we are. All of us – the green ones, the pink ones, the blue ones, the chefs, the musicians, the scientists, the crotchety old men who show up at every function and complain that they’d rather be at home – need to get together and remind the world, and ourselves, who we are.

Sure, it’s not easy to fix things up. But like a telethon, it’s not one person’s dollar that saves the day. It’s everyone’s dollar.

I’m reminded here of the story of Chanukah, but I don’t know why.

Ok, here’s why: We almost lost our theater that time too. But then a small, determined army of us came out of nowhere and beat the Greeks into obscurity. Seriously. Their only accomplishments since then, as far as we know, have been salad and yogurt. And then we came back in, the place was in shambles, and we had to fix it up, in the dark. But we worked together. If we did it then, we can do it again. And that was just a small group of us. Imagine what we could do if we got ALL the Muppets together.

It’s like the song toward the beginning of the movie:

“I’ve got everything that I need, right in front of me.
Life’s a happy song, when there’s someone by my side to sing along.”

Actually, it’s more about what was going on during that song. The song was actually a whole musical number. Apparently, in Smalltown, when you see someone walking down the street and singing, you drop whatever you’re doing, even if you’re right in middle of getting married, and you come out into the street and dance behind him, because you know that if you don’t dance to his song, he’s not going to dance to yours tomorrow. And then you’ll be stuck, say, trying to make a point to your wife with no backup. But also because you know that it’s not a musical number unless everyone’s dancing.

The Muppets are a family that, like all families, have fallen out of touch. And at times, so are we. It takes all types to make a family, but working together, we can keep the studio operating and save it from the evil oil barons who want our land.

We have the theater. We just have to work together to make it even better.

Alexander and the Jews
It Takes A Lot Of Faith To Be An Atheist
How Instagram Brought Back This Nostalgic Soup
What Makes Eli Run?
Comments
MOST POPULAR IN Jewlarious
Our privacy policy