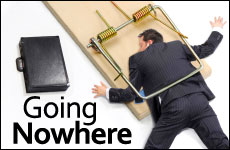 Where did it all go wrong?

Ever had the feeling you are going nowhere? You look around and it seems everyone is going somewhere and you look at yourself and you feel stuck. I’ve been working for over 20 years. I’ve been in my current job for four years and I am struggling. I look around fearfully and see my bills mounting with vicious intensity and my ability to pay them declining astronomically by the month. I am drowning. The medical aid cover is used up, the toilets in the house are backing up, the kitchen is falling apart, and the bills from the schools are lying around aimlessly waiting to be paid.

I lie awake at night pleading, begging for some way out of this mess, and not surprisingly, I cannot think of anything. I go around day in, day out, trying to think of business ventures that I can begin. But it always comes down to the same thing: no money to survive, no guts to take that first step forward. I have asked my boss on several occasions for a raise and the answer is always the same: No.

I don’t know what to do. I go to meetings with my boss and I need to appear happy. Otherwise the boss will think I have a bad attitude, which leads to that dreaded label: Negative.

No one better be labelled negative if you want to keep your job. So you pretend you’re so happy when your boss tells you he is going overseas for a week for someone’s wedding, who is not even his relative, but someone his wife “feels close to.” You think to yourself, I am so happy he is taking his wife away overseas, but please can he just spare a few bucks for me so I can survive the darn month? But you say nothing and you smile and you pretend you are happy for him and his wife.

You ask yourself, Where did it all go wrong? I feel like a child being punished for not learning my lessons. But I don’t know what lessons I am supposed to learn. I went to university, I earned more qualifications than most people, I have helped build other peoples’ businesses in my career, but all I ever got was a salary I could barely survive on.

In my younger days when I was young and feisty and really believed I could make something of myself and change the world, I used to challenge my bosses. I used to speak up for what I believed was right. And what happened? I antagonized everyone and ended up unemployed, with a wife and kids to support.

Blame is not an acceptable currency.

Is the reason I am where I am because of my parents, my schools, my teachers, my lecturers or my ex-bosses? Maybe all or none of them? Probably it is because of me. You can blame the world if you want, but what difference will it make in the end? The bills need to be paid and blame is not an acceptable currency.

So what’s next? Where does a person go? Of course one can just fold up and live the rest of life making excuses to creditors, making excuses to the wife and kids, always with the same line: "Sorry, there's no money. Your husband and father is a loser." Eventually the children will move out in disgust and your wife will spend the rest of her life wondering how she ever fell for such a turkey? And you? You become bitter, angry, a defeatist. You hate the world, you hate humanity, you hate yourself. You’re stuck on the sidelines of life, watching people going by who seem far superior as you shrink into total and miserable oblivion.

Unfortunately many have taken this option. But you tell yourself, No, no, no! Today I may be the epitome of a loser – no money, a job that seems to have dead-ended, a life surrounded by bills and demands, seemingly trapped in a cycle of defeatism and helplessness. But it cannot be. Why? I don’t know why. I don’t know anything really. And maybe that is just the point. Maybe in life you need to reach that point when you need to admit you just don’t know.

Nothing makes sense. Everything is upside-down. Who is blessed with money, health, good genes and good brains is a mystery. Despite all the books advising us how to get rich, clever and healthy, they are all drops in the ocean of mystery. Yes, personal responsibility is essential for living as best a life as possible, but to say it all fits into a neat puzzle of "10 Steps to get rich, healthy and wise" is a total oversimplification of reality.

At the end of the day we don’t know why the moron makes money; or the super-healthy suddenly drops dead'; or the marriage that began with the greatest affirmations of mutual, undying love ends in a bitter, acrimonious divorce; or the kid with the most potential ends up the biggest dropout. We don’t know. We speculate about self-esteem, self-confidence, EQ, IQ, SQ, whatever... There are still millions of people going nowhere fast and wondering what on earth happened to their lives.

So where to now? They say that every person has something special to offer the world and it's just a case of being able to discover it. Some people discover it early in life, some later, and some try so hard that they go right past it. It's a beautiful idea to believe that we are each uniquely special, and it’s probably true, but peering out from behind a feeling of going nowhere does not seem to be the best vantage-point for discovering this "something special."

Perhaps all this confusion is because we’re afraid to admit we’re wrong.

Perhaps that’s why there is so much confusion and nonsense in this world ― because we are afraid to stop and admit that maybe we are wrong. That maybe we don’t really know it all. Perhaps all the suffering and unanswered questions in life is to bring us to the realization that we don’t know all the answers, that we are players in a game far bigger and more important than we can ever imagine.

Even for those blessed with success, there is a lesson to realize that we don’t know everything.

Perhaps there is a real message behind the feeling that one is going nowhere, and it’s not such a bad feeling after all. In fact, it is leading to the ultimate point from where everything can begin: The realization that I don’t know it all. Perhaps we are all on an inexorable road to humility. And when we realize this, the game of a good, meaningful life can truly begin!