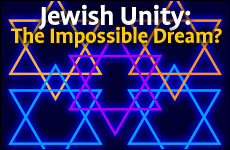 Let's unite the Jewish people for one minute.

Could we do it? I was doubtful.

An Israeli woman had a brainstorm: To call for a day of worldwide Jewish prayer sometime before Purim. Well, not exactly a day. Really one minute. Her idea was to get all the Jews in the world to stop what they are doing at exactly 12 o’clock noon on February 24 and recite, “Acheinu,” a prayer from the siddur [Jewish prayer book] that starts, “Our brothers, the entire Family of Israel, who are in distress…” By getting all the Jews to pray for all the Jews a true moment of Jewish unity would be achieved.

The innovator of this idea got Israel’s greatest rabbis, such as Rav Eliashuv, to endorse the plan. I belong to an international movement called The Jewish Women’s Project for Ahavas Yisrael [www.ayproject.com] devoted to promoting love and unity among Jews. We undertook to disseminate the idea for the Worldwide Prayer among English-speaking Jews.

Moments of Jewish unity are rarer than snowstorms in Jerusalem.

But I was dubious that we Jews could do it. Moments of Jewish unity are rarer than snowstorms in Jerusalem. Of course, Purim was such a moment. Faced with Haman’s plan of genocide, the Jews united and repented. In fact, the edict of genocide itself was predicated on our lack of unity. When Haman pitched his nefarious plan to King Ahashveros, he described the Jews as “a people scattered and dispersed among the nations.” When Esther decided to try to save the Jews, she directed Mordechai: “Go gather all the Jews.” Unity has always been a prerequisite for our redemption.

In fact, the four mitzvahs of Purim all engender love and togetherness among Jews. We assemble to hear the reading of the Megillah; we send gifts of food to our neighbors; we give charity to the destitute; and we get together with relatives and friends for a festive meal.

This is why the week before Purim was chosen for the Worldwide Prayer of Jewish unity. On a national level we are threatened (once again from Persia) with murder of the six million Jews presently living in Israel. On an individual level, we all know friends and relatives who are afflicted with serious diseases, depression, food disorders, addictions, or other maladies. Praying for “the entire Family of Israel who are in distress” aptly covers all of us. But can we do it?

ENLIGHTENED BY MY EMAIL

My flagging faith in our ability to unite was restored from the most unlikely source: my inbox. One day a couple weeks ago I received an email from Chabad asking -- no, pleading with —me to sign a petition to save the life of Martin Grossman. I had never heard of Martin Grossman. The email explained that 25 years ago, when he was 19 years old, Martin Grossman heinously murdered a policewoman. Although Martin had an IQ of 77, was on drugs at the time, and has sincerely regretted his crime, the email did not plead his innocence. Rather, while fully admitting his guilt, the petition was asking the Governor of Florida to stay Martin’s execution and instead sentence him to life in prison without parole.

Groups, and tens of thousands of individual Jews, who rarely agreed on anything were uniting to save the life of one admittedly guilty Jew.

I was amazed. We were doing it! Groups, and tens of thousands of individual Jews, who rarely agreed on anything were uniting in a campaign to save the life of one admittedly guilty Jew. And this is the crux of that campaign and of all efforts at Jewish unity. When we hate other Jews—individuals or groups--we point to the fact that they are WRONG. Wrong in their theology. Wrong in their politics. Wrong in their conduct. Of course it’s easy to love individuals and groups with sterling character traits and viewpoints similar to ours. There can be no Jewish unity, however, without loving Jews we don’t admire, don’t agree with, and don’t even like.

Paul Fleming, a columnist in a Florida newspaper named the Ft. Myers News-Press, criticized the efforts of Jews to save Martin Grossman simply because he was Jewish: “These folks are welcome to fight against Grossman’s execution for whatever reasons they choose. However when the next death warrant is signed and the next of Florida’s 394 death-row inmates is scheduled for execution, I expect… those who oppose Grossman’s sentence to once again… ask the governor for a stay. We’ll see.”

There’s nothing wrong, Mr. Fleming, with Jews rallying to save a fellow Jew even though we will not be launching a campaign to save the next death-row inmate. There’s a mitzvah to visit the sick. No one, however, has the time and energy to visit every sick patient in every hospital. But if my brother or cousin is sick, I’ll interrupt my schedule and make even major efforts to get to the hospital, because the patient is my family. And as I walk to his ward, I don’t have to apologize to every patient along the corridor that I will not be visiting her as well.

Loving other Jews doesn’t mean not loving anyone outside the family. But it does mean loving every single member of the Jewish family, no matter how much we might despise their actions or their attitudes.

Jews from across the spectrum flooded Florida Governor Crist ‘s office with some 50,000 e-mails, phone calls, and letters urging him to commute Martin Grossman’s death sentence. Nevertheless, Martin was executed as scheduled on February 16.

Before receiving the lethal injection, Martin recited Shema Yisrael. His last words were: “Ahavas Yisrael” (love for all Jews).

So apparently we can do it. We can unite for one minute at noon this Wednesday, February 24, and recite this prayer of Jewish unity:

Our brothers, the entire family of Israel, who are in distress and captivity, whether they are on sea or dry land—may the Omnipresent One have mercy on them and remove them from distress to relief, from darkness to light, from subjugation to redemption, now, speedily , and soon—and let us say, Amen.

Please disseminate this article to all the Jews you know and ten Jews you don’t know. Let’s go global with Jewish unity.

For the 20th yahrzeit of my father, Yisrael ben Yosef Yehuda. 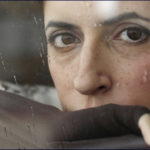