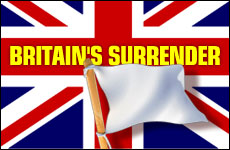 Years of demonizing Israel and appeasing Islamist extremism have coalesced in an unprecedented wave of hatred against Israel and a sharp rise in attacks on British Jews.

In Britain, the war in Gaza has revealed the extent to which the media, intelligentsia and political class have simply crumbled in the face of the global jihad.

The U.K. is a major player in European and world politics and is America's most significant strategic ally. Until now, it has been considered one of Israel's firm supporters and a linchpin of the Western defense against the world-wide Islamist onslaught. With the reaction to Gaza, however, that reputation is no longer sustainable.

London's reaction to the Gaza war shows it is giving up against jihad.

Years of demonizing Israel and appeasing Islamist extremism within Britain have now coalesced, as a result of the media misrepresentation of the Gaza war as an atrocity against civilians, in an unprecedented wave of hatred against Israel and a sharp rise in attacks on British Jews.

Throughout the war, London's streets have witnessed a hallucinatory level of violent and explicit support for Hamas from Muslims, members of the far left and supposedly progressive individuals.

Night after night, Israel's embassy in well-to-do Kensington found itself under violent siege. Demonstrators attempted to storm the building, howling their support for the terrorist body whose genocidal intentions toward Israel and the Jews necessarily includes killing every one of the occupants inside.

Certainly, there have been anti-Israel protests around the world. But in Britain, not only have these been particularly violent but the authorities have done nothing to stop such incitement of hatred.

The police told pro-Israel demonstrators on at least one occasion to put away their Israel flags because they were "inflammatory." Yet officers allowed some anti-Israel demonstrators to scream support for Hamas -- and even to dress up as hook-nosed Jews pretending to drink the blood of Palestinian babies.

In general, the police have reacted passively to the violence. One recent video clip captured the astonishing spectacle of Muslims stampeding through London's West End hurling traffic cones and other missiles at the police, all the time shrieking "Allahu akbar" and "cowards." The police ran and stumbled backward rather than standing their ground and stopping the rampage.

Not only has such violence barely been reported. There has also been no acknowledgment of the explicitly Islamist nature of these demonstrations. Keffiyeh-clad demonstrators prostrated themselves in prayer or shouted "Allahu akbar" as they attacked Jewish-owned or -founded stores, such as Starbucks and Tesco, on numerous occasions.

Instead, the political class has simply regurgitated Hamas propaganda. In a debate in the House of Commons last week, one MP after another expressed horror at Israel's supposed crimes against humanity in Gaza.

More serious still, Foreign Office Minister Bill Rammell cited as fact the Hamas claim that 300 children had been killed in Gaza, even though Israel has given a much lower figure, and said the Israeli action was "disproportionate" and the bombing was "indefensible and unacceptable."

Similarly, Prime Minister Gordon Brown, commenting after this weekend's cease-fire that "too many innocent people" had been killed, made no mention of Israel's strenuous attempts to minimize civilian casualties, nor Hamas's responsibility for holding Gaza's civilians hostage.

In fact, the British government has effectively taken the view that Israel should not be allowed to defend itself by military means against the Hamas rockets that ministers have taken care to condemn.

From the second day of the war, Foreign Secretary David Miliband was calling for an immediate cease-fire by both sides. Since Hamas would take no notice, this in practice amounted to pressure upon Israel to stop defending itself.

It was Britain which took the lead in framing the United Nations resolution calling upon Israel to withdraw all its forces from Gaza while making no mention whatever of Hamas. And it was Britain which also drew a disquieting moral equivalence between Hamas terrorism and Israeli self-defense.

Certainly, neither Mr. Miliband nor Mr. Brown -- a reputed supporter of Israel -- can be unaware that it was Tony Blair's refusal to call for an immediate cease-fire by Israel in the 2006 Lebanon war that finally led his MPs, already enraged by his support for the war in Iraq, to force him prematurely out of office.

But Britain's new coolness toward Israel is due to much more than this. The government's failure to support Israel's war against Hamas as the front line of the West's defense against the global Islamic jihad reflects its failure in turn to acknowledge the nature of that world-wide phenomenon.

Last Thursday, Mr. Miliband wrote in the Guardian that there was no single, unified Islamist threat but merely a set of various local grievances, such as Kashmir or the Golan Heights. Such startling ignorance of the goals and ideological antecedents of the Islamic jihad, from Hamas to Hezbollah to Pakistan's Lashkar-e-Taiba, is of a piece with the British government's stubborn refusal to accept that the West is under assault from a war of religion.

The government denies this fact because it does not want to face up to the unpalatable realities of fighting such a war. So although "middle Britain" is beginning to grasp that the Islamists in Gaza are the same as those rampaging through the streets of London, ministers are intent on appeasing Muslim extremism and intimidation both at home and abroad.

Accordingly, while Britain's security services have had significant success in smashing Islamic terrorism plots, government strategy for combating Islamist extremism rests upon seeking to mollify Britain's two million or so Muslims by avoiding confrontation -- which means turning a blind eye to threatening statements.

Recently, prominent British Muslims who advise ministers against Islamist extremism wrote an open letter making the veiled threat that unless the government condemned Israel there would be a rise in violence in Britain.

Ministers' openly stated fear that this will indeed happen as a result of the war in Gaza makes them anxious to show Britain's Muslims that they oppose Israel's actions. They don't understand that, by showing such weakness in the face of intimidation, they are not just betraying their Israeli ally but also undermining the Western defense against the jihad.

Across the spectrum, Britain's elites are terrified of dealing with militant Islamism. It is hard to avoid the conclusion that, in a pattern which goes back to the foundational Christian blood libel against the Jews, they are concealing their fearful inability to deal with Islamist aggression by displacing the blame onto its Israeli victims instead.

This article originally appeared in the Wall Street Journal.

I Am Jewish
Scientific Curiosity and the Divine Encounter
Mind Over Milkshakes
Love the Convert
Comments
MOST POPULAR IN Israel
Our privacy policy
Aish.com Is Looking for Great Writers