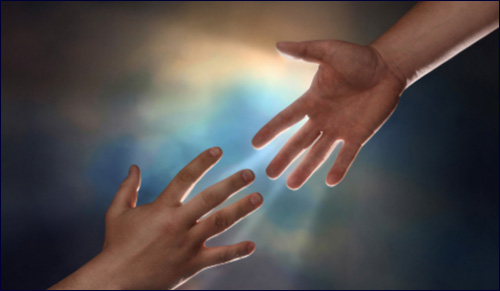 A true story about the power of love.

My neighbor Elisha lives only a few doors from me in Chispin. He works with young Ethiopian and Russian immigrants in an Army program. Last year Elisha was on his way back from reserve duty in Tze’elim. It was a warm September day, the kind that doesn't want to give way to the coming autumn.

The bus was crowded but halfway home, at the Afulah bus station, a lot of people got off. An elderly gentleman with a white beard, black hat and a long black coat got on and sat down next to him. He could see he was very distinguished, maybe a rabbinic dayan (judge). The rabbi saw the kippah on Elisha’s head and immediately began to talk about the Portion of the Week. From there they flew on to Daf HaYomi (Talmud) and then some issues in Jewish Law. The trip went by very fast and they were getting close to Tiberias, the rabbi’s destination, when he asked Elisha what he does. He told him about the youngsters that he works with and teaches, and how detached so many of them were from Torah and traditional Judaism.

The rabbi was silent for a while. After a few minutes he said, "Next month I'm retiring from my position as a religious judge. I've worked there 25 years. But don't think that I've always been like this. I didn't grow up in a religious home," he said with a sad smile. "My parents were Holocaust survivors. They didn't have the emotional ability to give me the needed attention. I practically grew up in the street. I almost became a delinquent, hanging out with the wrong crowd, even before my Bar Mitzvah.

“Near my house there was a synagogue and next door to it was a soccer court where I spent hours with my friends. Sometimes the ball would fall into the yard of the synagogue and once we even broke one of the shul's windows, but we ran away before they could catch us. One Shabbat when I was almost l5 I kicked the ball really hard and it not only fell right at the entrance to the synagogue but hit the rabbi as he was coming out, knocking off his hat. My friends and I laughed hysterically at the scene, watching his hat turn into a flying saucer.

“The rabbi picked up his hat, walked over to me at the court, and before he said anything, in my brash chutzpah I said, 'Shabbat Shalom. Does your honor want to make kiddush for us or join our soccer game?' He didn't fluster. He looked at me and asked, 'Where are your parents?' I replied mockingly, ‘They're dead.’

“The rabbi said, ‘Come with me.’ It seemed like a game to me. I don't know why, but I went with him. I thought of the jokes I would make with my friends when I got back. We got to his house. He went in and I followed. He made Kiddush and gave me something to drink. Then he asked me, 'Are you hungry?' 'I'm starving!' I replied. The rabbi motioned to his wife and they made a place for me at their table and brought me food. I ate like a man who hasn't seen food in a week. The rabbi ate very little. He just looked at me eating and spoke a few words. Years later I understood that I probably ate his portion.

“When I finished eating he asked me, 'Are you tired?' ‘I'm exhausted,’ I answered. The rabbi gave me a bed and I immediately fell asleep. When I got up it was Motzei Shabbat. The rabbi asked me, 'What do you want to do now?' 'I'd love to go to the movies to see a film, but I don't have any money,' I said. 'How much does it cost to get in?' he asked. 'A lira and a half,' I told him. The rabbi gave me a lira and a half and sent me on my way. But first he said to me, 'Tomorrow come again.'

Just love them as if they were your own kids, and then you'll succeed.

“And I came the next day, and the next, and the next. I ate and I got money for the movies, day after day. Eventually I found out that there were another l2 kids like me that the rabbi had picked up off the street that came to eat at his house. I started to become very attached to the rabbi. He began to teach me about Judaism, and I didn't want to be ungrateful, so I listened. I learned about washing your hands before eating, about prayers and the laws of Shabbat. He bought me a pair of tefillin and sat and learned with me, Chumash, Mishna and Halacha. Because of him, I eventually went to a yeshiva and got ordinated as a rabbi, and, as you see, eventually became a religious judge. He married me, he married my children and was the sandak (godfather) at my grandchildren's brit."

As they pulled into Tiberias the elderly man finished his tale.

"So don't give up on your charges," he told Elisha. "Look at where I started and what became of me. Just love them, love them as if they were your own kids, and then you'll succeed."

They started to get up and Elisha managed to get in one more question before they parted. "What was the name of that rabbi who took you in?"

"Why do you ask what ‘was’ his name? He is still alive and active, thank God, although he’s 92 years old," he said. "His name is Rabbi Ovadia Yosef."