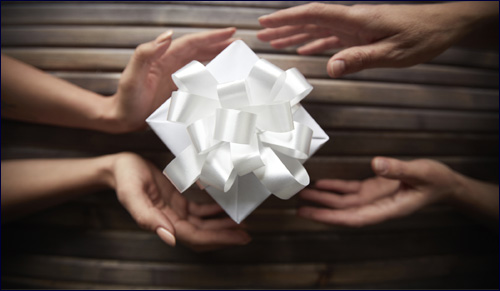 When you're giving but getting nothing back in return.

One of the main focuses of the Torah is giving. The world stands on acts of loving kindness. We emulate the Almighty by giving. Over and over again we are exhorted to give and give and give some more. We are told that marriage is not 50/50 but rather 100/100. It’s not about giving and receiving but just giving. Rabbi Dessler taught that the world is divided into two types of people – givers and takers. We are either one or the other.

I know which I want to be. So when people complain to me that they are giving but getting nothing back, I have an easy answer, an answer that just slides off my lips: “Don’t worry about their reaction. You just have to decide if you want to be a giver or taker.” Then I smile smugly and move on to the next question.

But my glib response was tested recently and I came up short. It’s not that my answer was wrong. It’s just a lot harder than I realized. I hadn’t really been giving people credit for their efforts or, perhaps more importantly, how difficult it was to be empathic in their particular situation.

What changed my perspective? I was in a situation recently (I’m trying not to be too revealing!) where I had no official role but was nevertheless called upon to interact with all the participants, to make relationships with new people and to share knowledge and ideas. It was hard work but it was for a good cause. When the program ended, the participants got up to express their thanks. They thanked the organizers from different countries, the administrative staff and the supporters. There was only one person there they didn’t thank. Guess who?

I’m ashamed to admit I had a little hissy fit and private meltdown. Why? Is the opinion of these strangers (most of whom I’ll probably never see again) that important to me? Is my ego that fragile? (I think the answer is yes!) I can honestly say that I wasn’t doing it for the thanks. I believed in what I was doing and felt I was doing the “right thing”. But I haven’t grown and evolved as much as I have hoped and I wanted acknowledgment. I know it’s foolish.I know it’s meaningless. But there it was. And it took me a few days to recover my sense of equilibrium, to get back to that place of “being a giver is all that counts.”

It’s not that my initial idea was wrong; it’s that the implementation of it is much more difficult that I had previously appreciated. I’m not going to stop participating in these programs (I am hopefully going to stop the meltdowns!) but I am going to work harder at exercising my giving muscle. And at being empathic to others who struggle with this trait.

I was embarrassed by the gap between my intellectual understanding and my emotional reaction. It was humiliating. But it was also an opportunity for growth. And for understanding – of myself and others. There are still only two types of people in the world – givers and takers. And I still want to identify with being a giver. It’s just going to take me a little longer to get there.

Tuning In to the Almighty

My Dreaded Trip to the DMV

From Good to Great

Talking Politics
Can You Show Me This "God?"
How to Become Immortal
Judaism and Mental Health
Comments
MOST POPULAR IN Family
Our privacy policy
Aish.com Is Looking for Great Writers