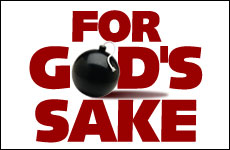 The challenge of our age: not to desecrate God's holy name with acts that profane all that He stands for.

Getting ready for the High Holy Days?

Let's see, there are two days of Rosh Hashana and then one day of Yom Kippur. That makes three in all. Not too hard to devote three days to God.

But it's not merely the days that are filled with lengthy synagogue services that matter. The truth is Rosh Hashana and Yom Kippur are just the "bookends" for a ten day period of repentance that is required for us to appreciate where we've gone wrong in the past year and to concentrate on how we can improve in the future. Ten days is exactly how long we need to begin the process of change and of Teshuva.

What's so special about ten? Just as we recite at the Passover Seder, "Who knows ten? I know ten. Ten are the Commandments" -- these ten days present us with the opportunity as well as the challenge to focus in on the ten major concepts of our faith.

Every day of the ten is devoted to one of the Commandments on the tablets.

Not surprising, then, that the two days of Rosh Hashana are inseparable and form one unit. Even in Israel, where the other holidays are but one day, Rosh Hashana is observed as two. They correspond to the first two commandments, "I am the Lord your God who took you out of the land of Egypt, the house of bondage" and "You shall have no other gods before Me."

These two and these two alone were heard by every Jew from the mouth of the Almighty Himself. After that, incapable of bearing more divine revelation, they begged Moses to take over and serve as spokesman. These two commandments were given as one -- and so they remain as one to this day in a 48 hour holy day.

On the first two days of the ten days of repentance we therefore try to capture the full meaning of this double imperative. We blow the shofar to proclaim God's kingship over the whole world. We go to a stream of water for Tashlich to enact a ceremony reminiscent of the coronation of a king, symbolic of rulership that extends across the seas. Our emphasis is on the ness of God and His dominion over Creation.

But all this merely serves to prepare us for what the Midrash identifies as the world's greatest challenge!

When God spoke at Sinai and uttered the words of the third Commandment, the Midrash tells us "the whole earth shook in fear." What was so frightening?

It was the relevance of a law that was addressed to people who had already accepted God but might now be guilty of a sin that to this day threatens our survival. "Don't take God's name La'shov" -- the Hebrew text is not "in vain" but "to what is vain." Don't misuse God to justify evil. Don't commit atrocities and justify them as holy because they are committed in the name of the Lord.

History is a horrible saga of iniquity rationalized as sacred service to Heaven. All we need do is to turn to the first murder of all time. Why did Cain murder his brother Abel? Because, a Midrash tells us, they had a religious dispute between themselves. One said "On my portion of land will the Temple be built" and the other said, "No, on mine." And so "for God's sake," brother slew brother.

The world cannot exist without God. Nor can it survive with using God's name to sanctify evil and violence.

How many victims has the world known of this violation of the third commandment? For centuries, the Catholic Church performed the most bestial crimes with their Crusades, justified because they were all done in the name of God. In our times, September 11th is a day of infamy not only for the atrocity associated with it but for the recognition that those who were responsible for the deaths of thousands of innocents shouted Allah Akbar- God is great! as they brought on their mass destruction.

The world cannot exist without God. Nor can it survive with using God's name to sanctify evil and violence.

Remarkably enough, the third day of the ten days of repentance has a special name that relates it to an important historic event. It is called T'zom Gedalia -the Fast of Gedalia. Jews fast on the day after Rosh Hashana because many years ago, in an act of fanatic extremism, a Jew was slain by fellow Jews -- in the name of God. It happened precisely on the third day of Tishrei, the day set aside for us to pay particular attention to the message of the commandment that calls on us not to dare rationalize wrong-doing as divine will.

Just a few weeks ago, the new pope, Pope Benedict, met with Muslim leaders. To his great credit, he acknowledged that Christianity has in the past committed the grave sin of "killing in the name of religion." With profound awareness of this blot on his faith's past, he urged Muslims to reflect on what is now being perpetrated in the name of Islam that threatens all of mankind.

"How many pages of history," he said, "record battles and even wars that have been waged, with both sides invoking the name of God, as if fighting and killing the enemy could be pleasing to Him. The recollection of these sad events should fill us with shame, for we know only too well what atrocities have been committed in the name of religion."

Perhaps sanity will prevail even among those who still see suicide bombers as holy martyrs and jihad murderers as divine messengers.

But it is something that we Jews must also confront as we reflect on the hatred within our own world, all too often justified as actions "for the sake of God."

"A fanatic," as Finley Peter Dunne pointed out, "is a man who does what he thinks the Lord would do if only He knew the facts of the case." There is an egotistical side to fanaticism that believes no one else is as wise or as capable of coming to truth. Fanatics, William James pointed out, deify themselves, and that is why they can justify any kind of ungodly behavior.

The truth is we are not God. On the first two days of the holy period of the Ten Days of Teshuva, we must reinforce our acceptance of His power and His dominion. On the third we are challenged not to desecrate His holy name with acts that profane all that He stands for.

It is the challenge of our age. And it is a challenge we must meet -- "for God's sake" and for the sake of His name.

Why Dip into Honey?

The World Changed. Did I?
For Every Individual, A Torah Scroll
Allegiance To The Monarch
Meet the Real You: Yom Kippur
Comments
MOST POPULAR IN Current Issues
Our privacy policy
Aish.com Is Looking for Great Writers