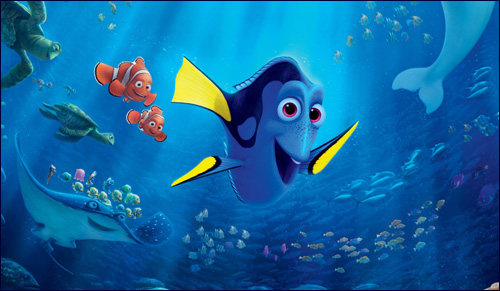 This weekend, the brilliant minds behind Pixar Animation Studios, and its parent company, Walt Disney Pictures, finally release Finding Dory, the follow-up to Pixar's 2003 cult classic, Finding Nemo in theaters nationwide. The premise of Finding Dory takes place exactly one year after the events of Nemo, and though it's been quite some time since we've seen the characters, the movie is quick to catch us up on what these guys have been up to since the credits began rolling on the last film.

Since it's been a long thirteen years since Finding Nemo hit theaters, and since most of Nemo's biggest fans are millennials that grew up with the film when it was released in 2003, expectations are pretty high for Pixar's next venture into the big blue. Having seen the film, and also having been one of those people that grew up with Finding Nemo being such a beloved part of my VHS-filled childhood, it's safe to say Finding Dory, while not perfect, does a great job in delivering a well-crafted emotional film that does justice to the franchise and adds a great new chapter for these characters.

The sequel puts a unique spin on the franchise, giving the spotlight over to Finding Nemo's breakout character Dory, and developing a crafted sentimental piece about a character's story that otherwise would have gone uncared for. After Dory suddenly remembers a broken memory from her childhood, she feels compelled to uncover the truth about her parents and where she came from. Determined to discover her childhood home, and with Marlin and Nemo at her side, she sets out to California to find everything she can about her parents and where she came from. The greatest thing about the emotional journey of Finding Dory is that much like Finding Nemo, underlying the film is a powerful message that's about finding yourself, and although the title is Finding Dory, the majority of the "finding" part is a journey of self-discovery. Life is full of challenges and discoveries, and Finding Dory is about appreciating what you have and looking beyond the gloomy moments to a possible brighter future.

Though Dory's past life comes back to her through mere broken pieces of memory, she's determined to find out more about herself and realizes that she truly belongs with her family once again. Having lived alone her entire life, the prospect that her family might be out there somewhere, waiting for her return is something she can't swim away from. It's a poignant, sentimental message that resonates with audiences, but there's also a strong takeaway that Jewish audience members can walk away with.

Though Dory's been far from her home since her childhood, there's still a piece of home inside that defines her and reminds her of who she is. Beyond the surface of the film, Finding Dory reminds us that it's never too late to discover yourself and it's never too late to return to your roots. It's a somewhat Jewish message, because just like Dory, over time, some of us may have drifted away from our Jewish roots and at times we may feel far apart. Through Dory, we're reminded that no matter how far we might have gone or where we find ourselves, there's always going to be something deep down that will define us and remind us of who we are. As members of the Jewish nation, we might fall down, but we'll always just keep swimming on to find the best version of ourselves that we can possibly be. Dory reminds us that no matter who you are or how far you've gone, and of course, however bad your short term memory loss is, it's never too late to take the journey back home.