Edward Snowden and my Bubbie Yetta 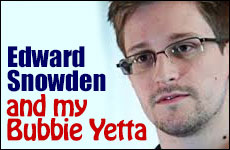 Why the best asylum offer for Edward Snowden is the one from my Bubbie Yetta.

Jewlarious Satire: Russia, Venezuela, Bolivia, Cuba and Nicaragua are among the countries that have made offers of asylum to Edward Snowden. Of course, granting asylum to the fugitive leaker could very well jeopardize relations between that country and the U.S., which wants Snowden returned to face charges. Understandably, Snowden is not overly eager to return. Yet I’d imagine he’s also not overly eager to spend the rest of his life in, say, Bolivia, with its completely different culture and language, not to mention difficulty in finding decent pizza.

My Bubbie Yetta Belinsky is an 84 year old U.S. citizen of Russian descent.

Yet there is one additional offer of asylum that Snowden has not yet considered because it was just made half an hour ago, but perhaps makes the most sense of all and would no doubt satisfy all parties involved. I’ll just say it. Edward Snowden is being offered asylum by my Bubbie Yetta.

While you’re catching your breath and taking all this in, let’s have a quick review of just who the parties are in this still-evolving real-life drama.

Edward Snowden is a 30 year old American former infrastructure analyst for the U.S.’s NSA (National Security Agency) and former employee of the CIA (Central Intelligence Agency). Obviously, a bright guy. He is in the news lately for having leaked details of several top-secret U.S. and British government mass surveillance programs to the press. Okay, maybe not so bright. Snowden said the leaks were an effort "to inform the public as to that which is done in their name and that which is done against them.” Snowden's leaks are said to rank among the most significant breaches in the history of the NSA. On June 14, 2013, U.S. federal prosecutors charged Snowden with espionage and theft of government property. Snowden left the U.S. and has been a fugitive in Hong Kong and Moscow. On July 1, 2013, WikiLeaks revealed that Snowden had applied for political asylum to 20 countries.

My Bubbie Yetta Belinsky is an 84 year old U.S. citizen of Russian descent. When she first arrived in America, she worked as a seamstress and attended English language classes at night. There, she met my grandfather, Mendel Belinsky, a baker. Their union created three children, including my mother, who co-created me. A widow for the past 17 years, Yetta spends her time sewing clothing for her great-grandchildren, cooking for her relatives, reading romance novels, and writing poetry. She lives in a rent-controlled apartment in Santa Monica, California, considers herself a Liberal Democrat, and follows politics closely. Yetta also enjoys watching reality TV shows such as “Dancing With the Stars” and anything on the Food Channel.

And now, the advantages for Edward Snowden in accepting the offer of asylum from my Bubbie Yetta…

Cooking for someone in need is to my Bubbie Yetta like shopping is to Paris Hilton—there’s no such thing as enough. “Edward Snowden” sounds like the name of British royalty and indeed, Yetta will spoil him as though he were a king. Snowden may not be Jewish, but after several months consuming Yetta’s fabled challah, gefilte fish, blintzes, tzimmes, kasha varnishkes, matzah brie and kugel, he’ll surely become “Jewish by nutrition.” Snowden may be an expert at gathering and communicating secrets, but if he loves real challenges, and I suspect he does, let’s see him wrestle Yetta’s world-class recipes for stuffed cabbage and kreplach from her hands. But woe unto him if he does get them and manages to post them online. He’ll be facing something unspeakably horrible—the wrath of Yetta.

Wisdom from Someone Who’s Lived Life

How did Edward Snowden get himself into this mess? Most likely by not having a mentor, or the proper mentor, to provide guidance and perspective. With Yetta, he’ll have one at long last. Here’s a woman who’s sucked the kosher marrow out of the bone of life for 84 years, walks to walk, talks the talk, and qvetches the qvetch. Just a sampling of Yetta’s wisdom:

Obviously, it’s no coincidence how close the name “Yetta” is to “Yoda.”

Let’s be honest. If Snowden accepted asylum in Russia, the public perception of his being a fugitive spy would only be reinforced. As for Bolivia, isn’t that where the bank-robbing fugitives Butch Cassidy and the Sundance Kid ended up? Cuba has all the Commies. The rest of South America served as a haven for a multitude of Nazi war criminals. Compare all that to being in an American home of a kindly, elderly Jewish woman who simply wants to help Snowden get his mind right, teach him some old country values, feed him a few good meals, and return him to the world a better man. That’s character and brand protection that money just can’t buy. Especially if Yetta allows the press to have some photo ops of Snowden mowing her lawn, playing with her dog, taking her to her doctor appointments, and vacuuming.

Now, some of you may at this point be asking, if Snowden comes back to America and moves in with Yetta, wouldn’t he have to face charges? Very perceptive of you. And, yes, Snowden would have to face charges. But why would it have to happen immediately? People are often arrested and then have to wait in jail for a long time before their trial occurs. Let’s save the taxpayers some money and have Yetta whip Snowden into shape for his trial. By then, everyone will have calmed down and this situation can be approached with clear heads on all sides. Yetta tells me she even has the guest room ready for him now. The one featuring the painting of Moses parting the Red Sea. Now, what judge and jury would want to throw the book at a man who’s just been nurtured and supported by Bubbie Yetta and given the YSOA (Yetta Seal of Approval)?

By the way, should this all work out well, Yetta tells me she’s open to being of further service to her nation. She knows the jails are overcrowded and mandatory early release of prisoners is happening. Yetta would be pleased to help out by providing a sort of halfway house to integrate these people back into society. And she makes the same offer for disgraced celebrities. Paula Deen, are you listening?

Advice for the Kosher Traveler

Jewish Ways to Lose Weight After the Holidays

Step Bubbiehood
It Takes A Lot Of Faith To Be An Atheist
How Instagram Brought Back This Nostalgic Soup
What Makes Eli Run?
Comments
MOST POPULAR IN Jewlarious
Our privacy policy