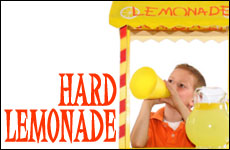 Gather round kids because I’m going to teach you how to support your family by selling Lemonade.

Kids, gather ‘round, because I am about to impart some pearls of wisdom on the topic of selling lemonade.

Selling lemonade is a cherished summer tradition handed down from generation to generation of kids, except that by the time they hand it down they’re actually adults, and the main reason they want their kids to sell lemonade is to get them out of the house for a few hours. (Your parents love you and all, but sometimes you can be very noisy, especially when they’re trying to write a humor column.) This is Pearl of Wisdom number one.

To cover your overhead you will need to charge about $500 per cup just to break even.

But that’s no reason not to at least try to sell some lemonade. Selling lemonade will prepare you for the business world by teaching you the value of a dollar, and it will also teach you about hard work and patience and business ethics, such as not to suddenly sell ten cups while your brother runs inside for a moment and then refill the pitcher with the garden hose. It also teaches you about overhead costs, and about how, if you want to open a successful lemonade stand, you first need to invest in a table and some chairs and a sign and some actual lemonade and a pitcher and cups and straws and an icemaker and a kosher supervisor and health insurance for your brother. So, for starters, you will need to charge about five-hundred dollars per cup just to break even.

Option #2 is to just ask your parents to provide everything, and chances are they will be more than happy to do so, just to get you out of the house. This option will not prepare you for the business world, but it will prepare you for the first couple of years of marriage, and teach you the value of asking your parents for money. And then you can sit there and charge way less for a cup of lemonade than your parents got it for in the first place. That is Pearl of Wisdom number two.

Once you have your supplies, you’re going to want to think about attracting customers. (That is Pearl of Wisdom number three.) Most parents, although they’re trying to teach you independence, or as much independence as someone can have sitting on the front steps of his parents’ house, also want you to be safe, so they basically tell you not to sell lemonade to anyone you don’t know. This will not really be an issue, because unless you live on a main road, chances are that most of your customers will be neighbors on the way to their cars. But it’s not like very many people who don’t know you will buy lemonade from a bunch of kids who, for all they know, used lemon floor cleanser to make it. But this is no reason to be discouraged. In fact, there is good reason to believe that all of these designer coffee shops started the same way – a bunch of kids selling hot drinks to strangers on their parents’ front lawns, and now they have international chains with storefronts on every block. The only way they can expand at this point is to have an actual pipeline that goes into everyone’s house, so that your faucet options are “hot”, “cold”, and “designer coffee”. That way, your parents get the water bill, and they’re like, “Hey, who filled the kiddie pool with designer coffee?” (This is not Pearl of Wisdom number four. Try it at your own risk.)

But coffee shops have exposure. That’s why you should put some effort into convincing your parents that, from a purely monetary standpoint, it would be very smart for them to move your home to somewhere with greater exposure, such as the median strip of a highway, or the grassy part in the center of a sports stadium (so long as they don’t mind the occasional ball crashing through their window). (This is Pearl of Wisdom number four.)

The point of all this boundless wisdom, of course, is to learn from my mistakes. I did not have a lemonade stand growing up. But I had an acorn stand. I was a squirrel, apparently.

I had an acorn stand. I was a squirrel, apparently.

I was seven years old at the time, and my family had just moved to Monsey, and there was a huge tree across the street that was dropping acorns all summer. So I collected them and put them in a little wagon and in a couple of days I had a wagon brimming with acorns, and nothing to do with them. I really hadn’t thought things through past that point. So I decided to sell them.

I would like to pause for a moment to point out that I do not have a head for business. I have a head for creativity. Now, this does not mean that I am bad at math. I know that if I have six dollars in my pocket, and I spend a dollar-fifty on a loaf of bread, that I have four-fifty left. That is not the problem. The problem is that I have only six dollars in my pocket.

So given the fact that I had more creative sense than business sense, I decided that the creative thing to do was to sell them. So I put up a sign that said, “Acorns – One Dollar Each,” and I got to work thinking up reasons that someone would possibly want to buy an acorn. The best scenarios I could come up with was someone looking to buy a ball to play with that was not heavy enough to smash through a window, and someone looking to buy food for his pet squirrel.

So I never did sell any acorns, and the one time that I actually had potential customers, it was a whole bunch of teenagers on bikes, and as soon as I saw them approaching, I made the shrewd business decision that it was much more fiscally responsible to put everything back in the garage than to try to explain to them why they would want to buy acorns. (This is Pearl of Wisdom number five through ten.)

And so, to sum up, it is a good idea to sell lemonade, and it is a better idea to sell coffee, but don’t sell anything wherein you have to explain to people much scarier than you are why they would want to buy your product. And if you do, don’t forget to invest in something you can use to scare off squirrels.

Jewish Summer Camps from Hell
Don’t Believe in Other Gods Versus God is One
Seeing Without Eyes
Why Shouldn’t We Eat Whatever We Want?
Comments
MOST POPULAR IN Jewlarious
Our privacy policy
Aish.com Is Looking for Great Writers