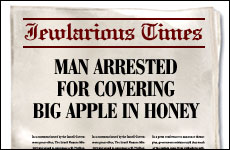 New York, NY -- Benjamin Zion was arrested on Monday morning atop the Empire State Building in New York City. Zion was apprehended on the observation deck of the historic building as he poured honey down the side of the New York landmark. "There is the Jewish custom of celebrating the New Year by dipping apples in honey. What better way to bring in Rosh Hashana 5769 than by covering The Big Apple in honey," said Zion as he was led away by the NYPD.

Security guards at the building said they discovered a document on Zion, titled the "Protocols of Zion," detailing his plan to cover the Chrysler building, Grand Central Station, the Port Authority, the Statue of Liberty, and Papa John's Pizzeria, among other buildings. "I'm the Jewish Christo," said Zion, referring to the world renowned artist Christo who designs temporary, large-scale outdoor environments. "I've even considered changing my first name to Monte."

The NYPD HAZMAT unit confiscated a backpack containing 37 bear-shaped jugs and Zion is reported to have had 123 individual packets of honey in his pockets. When questioned by New York's finest, Zion said, "I am a man of peace, a man with a sweet tooth just looking to spread the holiday cheer." According to the police Zion is a resident of Boro Park, Brooklyn and has no prior police record. Friends of Zion describe him as an eccentric but sweet man who loves celebrating the holidays.

In light of this incident, security at the Empire State Building and other landmarks around New York has been tightened, until after the Jewish High Holiday season. "This was a potentially sticky situation that has thankfully been resolved," said NYPD spokesperson Mike Apple. Apple would neither confirm nor deny reports of an increase in the number of bee stings reported on the Empire State Building observation deck.