Earthquake: Shaken Up in LA 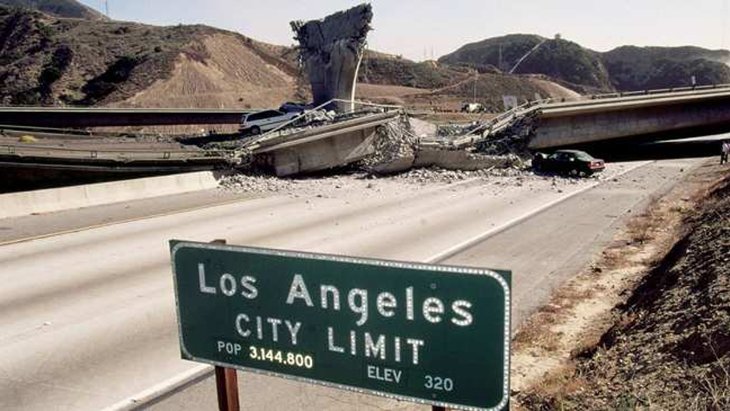 The earthquake has ended, but the jumble of feelings that it engendered have not.

I didn’t feel the earthquake on July 4th. I was out running errands, engaged in very all-American activities like buying food for our barbecue and plants for our garden. Although it was decent size (6.6 I think), the epicenter was 150 miles north of Los Angeles and I dismissed it from my mind.

Other than thinking that Lowe’s should rethink their customer training, I didn’t really bite. “I’m not worried,” I commented blithely as I left the store. And it was true. I have a long list of free-floating anxieties but somehow earthquakes never made it onto my list.

But “man plans…” and all that. While my husband was at shul I was sitting by myself Friday night (the first time in 35 years but that’s another story!) when the house started to shake. At first I ignored it. I’ve lived in southern California for 36 years and small tremors are nothing new. I continued reading, the very picture of calm and cool (and perhaps end-of-the-week exhaustion) but the shaking didn’t stop. It went on and on and on. I started to get nervous.

I actually got up and sat under the kitchen table – well, I sort of half-crouched under it because I couldn’t quite reconcile myself to sitting under it; I just couldn’t quite commit to being nervous about this quake. The overhead light in my living room was swaying back and forth as the earthquake continued. I started to get a little concerned. I wondered how my kids and grandkids a few blocks away were holding up… And then, thank God, it stopped.

The house seemed to sway a little (maybe it’s that earthquake retrofitting) before completely standing still. Or maybe it was my own wobbliness. But calm returned – to southern California, to my house and to me. It was over. Or so I thought.

The actually earthquake had ended, but the jumble of feelings that it engendered had not. “Why didn’t you come check on us?” asked my daughter, invoking the guilty, bad parent card.

“I really wasn’t worried,” I feebly responded. While this was true, we probably should have walked over. Because maybe even if we weren’t worried, they might have been. I’m not anticipating a next time (despite the ominous words of my friend at Lowe’s and all the seismologists in the area) but calling or going over there will be my next step in the future. Although I doubt even our reassuring presence would have calmed down my tired and hysterical granddaughter.

I was here in the earthquake of ’94 which was very dramatic and very frightening. Glass bottles slid off counters and broke, power went off, the neighborhood emerged onto the streets (my husband wanted to show the kids the stars which was a first for them!) and people really did come over to check on each other. This one may have been stronger (7.1) but the epicenter was sufficiently far off to prevent serious damage – physical or psychological.

Every event, man-made or “natural”, is a chance to learn and grow.

The next morning it was already the subject of chit-chat. “Did you feel it?” is a common LA expression. And it’s not just talking about the mood of an event! It was only when my granddaughter (not the hysterical one, her older sister) said to me, “Bubby, did you realize it’s the Torah portion of Korach, (where the ground opens up and swallows Korach and his followers who disagreed with Moses)”, that I actually gave more serious thought to the matter. I don’t presume to understand the connection between the event and the theme of the parsha – although we know there are no coincidences! – but let’s just say that it focused me on what I could learn from the earthquake.

It actually (forgive me) shook me up. After all, every event, man-made or “natural”, is a chance to learn and grow. And one that hits home in such a direct way – even more so. The lesson may be collective. The lesson may be individual. It may be both. But lesson there is. An opportunity for growth is definitely being presented. I’d like to learn it now so another earthquake is unnecessary!

I’m still trying not to add earthquakes to my list of anxieties (although it seems to be weaseling its way on). I’m trying not to overreact. My husband is very focused on the need to stockpile water and I seem to have a hard time taking that seriously. Maybe because I don’t want to really confront the issue.

But water or not, I need to look at my life and do some introspection. I need to grow. Maybe I’ve gotten complacent. It’s summertime; my teaching schedule is lighter. My travel schedule is heavier. Maybe I’ve lost focus. The earthquake was a chance to pull myself back together, to re-orient myself towards my true goals, to remind myself not to lose sight of them – even during the barbecues, pina coladas and fireworks. There’s nothing wrong with any of that (I’m happy to share my pina colada recipe!) but it should never be instead of or more important than our spiritual growth.

An earthquake is a wake-up call. We each have different areas where we need to rouse ourselves, different areas of challenge and struggle. And every so often we need a reminder. Let's hope we embrace its lesson so we don't need another one.

Where’s the Empathy?: On Punching a Flight Attendant in the Face
The Blue Beyond
Great Place to Live
Is Eating Supposed To Be Spiritual?
Comments
MOST POPULAR IN Spirituality
Our privacy policy