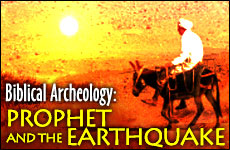 The historicity of Balaam, the non-Jewish prophet.

One of the more enigmatic Biblical figures is the prophet Balaam. The Bible first introduced him to us as the Israelite nation was encamped in the Plains of Moab, on their way to the Promised Land. The Moabite king, fearing an attack by the Israelites, summoned Balaam to come and curse the Children of Israel. In the end, Balaam does not curse the Israelites but bestows blessings upon them. [1]

The Talmud [2] tells us that earlier Balaam had been an adviser to the pharaoh who enslaved the Children of Israel and sought to destroy their male children. In fact, the plan to destroy the Israelites was masterminded by Balaam. The third century BCE Greco-Egyptian historian, Manetho, also mentions that it was the prophet-adviser to the pharaoh who instigated the enslavement of the Jewish People.[3] (Do I mean to say that there is an ancient extra-Biblical source that refers to the enslavement of the Israelites? Yes, but that issue deserves an article all by itself.)

Due to Balaam's renowned preeminence, we would expect that some mention of Balaam would be found in some ancient nation's records.

Not only did Balaam reside near the land of Moab and in Egypt, but Midrashic sources also place him in Aram[4], modern-day Syria, and in the Aegean isles[5], and in Cush, modern-day Ethiopia [6]. Balaam was an itinerant prophet with a far-reaching reputation.[7] Due to Balaam's renowned preeminence, we would expect that some mention of Balaam would be found in some ancient nation's records. And indeed, our expectations will not be disappointed. 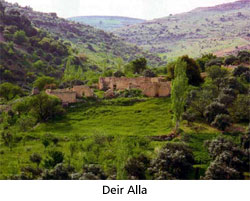 Balaam was the grandson of Laban the Aramean. [8].The patriarch Jacob lived in Aram and married the two daughters of Laban, Leah and Rachel. Jacob shepherded the flocks of his father-in-law for many years. As Jacob and his wives were returning to the land of Canaan, they stopped for a while in the land of Moab in the settlement later to be called Succoth. [9] Archaeologists believe that the Jordanian hill called Tel Deir Alla is the site of Biblical Succoth. And, it was here in Tel Deir Alla that evidence of Balaam was found.

An expedition led by Professor Henk J. Franken of the University of Leiden was excavating in Deir Alla in March of 1967. The workers were cleaning up some debris from the day's work when someone noticed what seemed to be traces of lettering on fragments of plaster that littered the floor. For archaeologists, the most exciting find is not gold or silver, but writings! Professor Franken was overjoyed at this unexpected discovery.

The weather during that time of year was capricious. One day heavy rains fell; the next day a drying wind filled the air. Neither of these was good for the fragile pieces of plaster. Hastily, a tent was erected to protect the area from the elements. There were still two more weeks of excavation work that had been planned, but all digging stopped. All attention was focused on the writing. 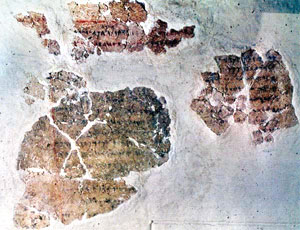 Reports of the discovery spread throughout the archaeological community. Scholars representing the United States, Jordan, France, Germany and Holland came to examine the fragments. One fragment had written on it in bold letters the words: "the prophet, Balaam son of Beor."

It took approximately ten years to assemble the piles of plaster fragments, jigsaw puzzle style, into a coherent text. Eventually, a chilling prophecy emerged. It reads:

Inscription of Balaam son of Beor,
the prophet, man of the gods.
Behold, the gods came to him at night,
and [spoke to] him according to these words,
and they said to [Balaa]m son of Beor thus:
"The [Light] has shone its last;
the Fire for [judgment] has shone."

And Balaam arose in the morning,
[ ] days,
[ ] ,
and cou[ld not eat],
and he wept bitter tears.
And his people came up to him
and they [said] to Balaam son of Beor:
"Why are you fasting and why are
you weeping?"

The gods have gathered together,
and the(shaddayim) gods have met in assembly,
and they have said to […….]:
"Sew up, bolt shut the sky with your cloud!
Let darkness be there, and not brightness,
gloom and not radiance;
Yes, strike terror with the cloud of darkness,
and do not remove it ever

In order to date the inscription, the fragments were subjected to radio-carbon dating tests. The results indicated that the inscriptions were to be dated circa 800 BCE, plus or minus 70 years, with an accuracy probability of 66%. [11] The probability rate of only 66% of a 800 BCE. date is not very reassuring. Initial paleographic studies, based on the shapes and forms of the letters, seemed to support this general time period. [12] However, recently, scholars have lowered the date closer to 600 BCE. [13] This suggestion is based on a connection between the handwriting style of the Deir Alla inscription and certain Ammonite inscriptions of the seventh century BCE.

The inscription can easily be seen as a demonstration that the memory of Balaam the seer survived long after his demise.

Admittedly, there is a 500 year gap between the time the Biblical Balaam is assumed to have lived and when this inscription was written; yet the inscription can easily be seen as a demonstration that the memory of Balaam the seer survived long after his demise. It is likely that his prophecies were written and handed down for generations, in much the same way the epics of Homer were written and transmitted for hundreds of years.

There are a number of other important factors of the Tel Deir Alla inscription that coincide with the Biblical and Midrashic texts:

The "international, freelance prophet," Balaam, prophesied in Moab, among other places. The Tel Deir Alla inscription was found in Moabite territory.

Balaam was originally from Aram. The text of the inscription is in an Aramaic dialect rather than in the language of the Moabites. For example, the opening line refers to Balaam the son of Beor. The word "son" in Moabite would be similar to the Hebrew "bn" but the inscription reads "br" which is the Aramaic equivalent. [14]

The God of Israel is known by many names. The most common name is YHVH which appears over 1,500 times in the Torah. The name Elo-him is used over 200 times. One of the least used names is Sh-ddai which appears only 10 times, mostly in Genesis, in connection with the forefathers of Israel. In the book of Numbers the name Sh-ddai appears only twice, both times in connection to the prophecy of Balaam. In the Tel Deir Alla inscription the name Sh-ddai also appears twice, in the plural form as Shaddayin, the term which Balaam, a polytheist, would naturally prefer.

It is clear that the Tel Deir Alla inscription of Balaam is foretelling doom for the Moabites. In the book of Numbers (23:24) we find Balaam telling the Moabite nation of their impending demise. "Behold, the [Israelite] nation will arise like a lion cub and raise itself like a lion; it will not lie down until it consumes prey and drinks the blood of the slain." In the next chapter Balaam says, "A star has issued from Jacob and a scepter-bearer has risen from Israel and he shall pierce the nobles of Moab…" (Numbers 24:17)

The plaster inscription in Tel Deir Alla came from a wall of a building that was destroyed by an earthquake. [15] How can an archaeologist tell if a city or building was razed by an invading army or if it was due to an earthquake? There are several telltale signs. An invading army will knock down walls in all directions, haphazardly, smashing them in sections to demolish them. Stones of a wall that was toppled by an earthquake will generally tumble in the direction of the force of the tremor, and they will fall as a complete unit, almost as if the wall was constructed whole, horizontally upon the ground. Moreover, an invading army will destroy buildings without knocking down every wall entirely. Damage alone suffices to vanquish a city. Earthquakes are less forgiving, collapsing the buildings almost entirely.

If a circa 600-650 BCE date is correct for the collapse of the plaster inscription at Tel Deir Alla, the earthquake that destroyed the building was, in fact, recorded twice in Tanach (Books of the Prophets):

1) The book of Amos begins with, "The words of Amos, who was one of the herders of Tekoa, who saw visions concerning Israel in the days of Uzziah, king of Judah, and in the days of Jeroboam, king of Israel, two years before the earthquake." (1:1)

2) In the book of Zechariah, the prophet says, "…and you will flee as you fled from the earthquake that was in the days of Uzziah, king of Judah." (14:5)

The Deir Allah inscription not only attests to the historicity of Balaam but is also dramatic evidence of the earthquake in the days of Uzziah and Jeroboam. Two for the price of one.