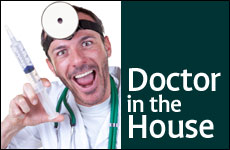 I’ve been feeling kind of lousy lately, and I’ll tell you why: I went to the doctor.

I’ve been feeling kind of lousy lately, and I’ll tell you why: I went to the doctor.

The first thing he told me, right off the bat, was that I’m fat.

Now before you panic, I want to stress that I didn’t go for any serious reason. I went for my annual physical exam, which I get approximately every ten years.

In truth, I don’t even remember the last time I went to the doctor, except that:

So my wife has been bothering me for the past couple of years already to for goodness sakes go to the doctor already. You know how women can be: nag nag nag. “Go to the doctor.” “Lose some weight.” “Have some salad.”

Seriously. What do these women want?

So I opened up my big fat health-insurance book and looked around for a nice Jewish doctor.

It turns out the doctor I found is indeed very nice. The first thing he told me, right off the bat, was that I’m fat. Actually, he didn’t even use the word “fat” – that’s how nice he was. He used the word “obese”.

This was a total shock to me. I knew I was overweight, thanks to my lovely wife, but to me, “obese” is a term reserved for someone where, if you are asked to describe the person, you either feel the need to use the term “a little on the heavy side”, or you totally trip over yourself trying not to say that. But as I later found out, according to the body/mass index chart, I am indeed considered obese, for medical purposes. Even my wife was surprised.

Then the doctor asked me a whole bunch of questions, like he was afraid that if he didn’t find anything wrong with me, I probably wouldn’t come back for another ten years.

“Are you on any medications?” he asked.

“No,” I said. It would be pretty weird if I were on medication, considering I hadn’t been to a doctor in ten years.

Then he asked if I’d ever had any number of health issues, and I just answered “no” to everything. Even for the things that I had no idea what they were.

“Do you ever have heart palpitations?” he asked me.

“No,” I said. “Wait. What are heart palpitations?”

“That’s when your chest hurts for a moment.”

But what kind of “hurt”? I’m not going to say my chest has never hurt, but for all I know, it was something I ate. What’s the difference between heart palpitations, heart burn, chest pains, heart ache, tummy ache, and shortness of breath? Every one of those can be defined as, “that’s when your chest hurts”, and yet he asked me about each one separately. I think that with all these advances in modern medicine, there should be some kind of system to define pain, like the one employed years ago by my ninth-grade study-partner (chevruta). One time, my study-partner told me that he got into an argument with his little brother, and that he gave his brother a dead arm. I didn’t have any older brothers (I still don’t, actually), so I asked, “What’s a dead arm?”

“This,” he said. And he gave me a dead arm. So I’m saying that the modern medical system should have some kind of machine that can duplicate the different kinds of pain, or else they can hire my ninth-grade study-partner to do it. And that way, when you come into the doctor, and he asks “How are we feeling today?” you can show him.

My other issue is that in general, when people ask me how I am, I almost always say, “Good, Baruch Hashem.” It’s my natural reaction. The only person I’m ever honest with is my wife, because I find that if she thinks I’m feeling better than she is, she comes up with a million things for me to do. So with her, it’s always a contest of who’s feeling less fine. If anything is even slightly bothering me, I make sure to mention it. In fact, now I’m thinking that’s why my wife wanted me to go to the doctor so badly. (“Oh my goodness! He’s never feeling well!”)

But my point is that when the doctor asked me all these questions, I kept telling him that I was feeling fine. I’m not going to share with him how I’m really feeling; I just met the guy.

He also told me that I may someday have high blood pressure.

In the end, he told me a couple of things. First of all, he said that my calcium is a little high, and my vitamin D is a little low. He didn’t tell me what that means, but he did tell me to come back in two months or ten years, whichever comes first, so he could run some more tests.

He also told me that I may someday have high blood pressure.

So how does one lower his blood pressure? The most obvious way, of course, is to cut out stress. But the doctor didn’t tell me to do that. In principle, if you tell someone to cut out stress, he’s not going to say, “Yeah, come to think of it, I do yell too much.” He’s going to say, “Well, if everyone around me would stop doing stupid things…”

It’s not even like I can fix things on my own:

So he recommended that the best way to lower my blood pressure is to lose weight. That would actually lower the pressure on a lot of things, such as my waistband, my belts, and my office chair. So that’s what I’m doing. I’ve already added a salad to every meal. Also, I have a free gym membership that I haven’t really used since I wrote an article about it that one time. I went for a few weeks, but I found that wasn’t losing enough weight to make it worth the time I was spending. So I just decided to spend the money and buy a bigger suit.

My point, though, is that I used to be carefree and not think about my health, and now, everything that happens causes me to think: “Am I gaining weight? Was that a heart palpitation? How about that one?” So going to the doctor has definitely aged me.

I’m not saying you shouldn’t go to the doctor. In general, nothing can be gained by not going, besides, you know, a few hours of actually getting other things done. You either have nothing wrong with you, in which case you’re better off knowing that for sure, or you do have something wrong with you, in which case the sooner you know, the better. I’m just saying that in my particular case, I was better off not knowing. All this knowing is not good for my blood pressure.

The Second Time Around
G-d Time
Shavuot is The Holiday of Cheesecake and Blintzes
What Does Kosher Mean Literally?
Comments
MOST POPULAR IN Funny Stuff
Our privacy policy