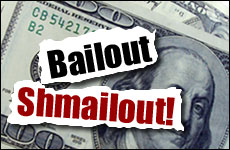 My solution for our ailing economy.

Yes, I am going to perform the amazing feat of fixing the economy. While the government can't seem to get this done with as much as $700 billion (which used to be a lot of money when I was growing up in Van Nuys) and billions more in bloviating and blustery words, I will do it at no taxpayer expense, and in only 700 words!

This is a crisis of confidence, with a smattering of fiscal irresponsibility thrown in. So my first instruction is: everybody stay calm! This goes triple for Capitol Hill lawmakers who are posing for CNN with annoyed expressions and demands that the Treasury Secretary release billions of dollars more in bailout bonanza to whoever is next in line in Washington, tin cup in hand. Whatever happened to "the buck stops here"? Now we are on the verge of having to change our name to the United States of Indebtedstan.

We're on the verge of having to change our name to the United States of Indebtedstan.

And speaking of old battle cries, nothing beats the one I heard last night: "The only thing we have to fear is . . . fear itself!" This is why it pays to watch the History Channel more than watching CNN, the Histrionics Channel. Sure, it was spoken by the Granddaddy of All Bailer-Outers, but who can deny that his immortal advice was an elixir for an anxious nation?

Beyond that, we need to take bold action and go shopping. Being patriotic doesn't only mean keeping your car tires inflated; it means taking that credit card out of its secure location and giving it a workout at the local mall. They're lonely over there! Besides, who can resist these sales? They're practically giving stuff away! Look, if I can find room in my closet for a few new pairs of Stuart Weitzman pumps for 60 percent off, so can you. In times of sacrifice, we need a team effort. I simply can't do it all by myself. And if the economy continues to sink, at least we'll all be well dressed for the occasion.

My "Shop for America" program is brilliant compared to the stupid "stimulus package" idea where Washington sends out checks and then makes us send the money back later in the form of some newly invented "user excise assessment tariff" or some other Orwellian-sounding tax. To speed this along, I suggest that our president-elect hold off on appointing the new climate change czar and peace studies czar and hunker down to the serious business of our nation by appointing a Shopping Czar. This must be a woman, for maximum impact, but not Hillary, unless she's willing to accept an Undersecretary of Pantsuit Shopping title, which is doubtful.

Because I believe so strongly in individual rights, my "Shop for America" program would be strictly voluntary, unless it doesn't work. In that unfortunate event, some of these rights might need to be curtailed -- for the good of the country, of course -- until those cash registers start humming happily all across the land. While I'd hate to have to do this, if enough people aren't willing to roll up their sleeves and say, "Charge it," I would mandate the broadcasting of the Home Shopping Network on every television set now blaring in doctors' waiting rooms, gas stations, restaurants and airports. Nobody in their right mind would want to see this happen.

But, you might protest, how can you tell us to go shopping at a time like this? Didn't our spendthrift ways get us into this bitter pickle in the first place? This question is not above my pay grade. I'm not suggesting you buy a set of diamond-fused wine glasses or an alligator shaving kit. Besides, even if you tried to purchase such pretentious things, your credit card would probably be denied. But hey, take the family out for dinner, buy a weed whacker, a new sweater, or a workout bike if you can swing it. Who knows? Maybe this time, you'll actually use the darned thing. We're going for a chain reaction of confidence, you see, and if everybody just does their small bit, we just might have a merry Chanukah after all.

Fiddler on the Roof: New and Improved?

Israel Initiates Recycling Program; Arab Street Erupts in Anger
For Every Individual, A Torah Scroll
Allegiance To The Monarch
Meet the Real You: Yom Kippur
Comments
MOST POPULAR IN Jewlarious
Our privacy policy
Aish.com Is Looking for Great Writers