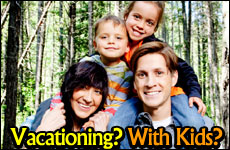 Will it be relaxing? No way. Will it be memorable? Definitely.

I’m supposed to be on vacation this week, but my wife and I can’t settle the issue of whether or not to bring the kids.

I can’t settle the issue of whether or not to bring the kids with us on vacation.

When I was growing up, my parents took us along on most of their trips, even though it’s hard to keep an eye on ten kids at once in a strange place. My father would usually spend the entire trip asking, “Where’s (name of child)?” And my mother, who had actual physical eyes on the back of her head would spend the entire time telling him where we were.

“You’re about to trip over her. Stop looking behind you.”

So I don’t know if my parents enjoyed any of these trips as much as they could have. But they did create a lot of great vacation memories that we still talk about to this day, such as the time we broke down and the time we almost broke down. We also remember some of the things we did when we weren’t waiting for the car to start working again.

When you take your kids along on a vacation, and you keep kosher like my family, it changes everything. Your meals, for example. When you have to feed your children, you feel the need to create nutritious meals, even though all you have to work with is a travel range, a treife microwave, and a coffeemaker. You can’t just serve peanut butter eight times in a row. The average vacationing parent has, at some point, made scrambled eggs on a waffle iron while their kids sat around the hotel room, noshing on ice cubes.

But so far, all of the vacations my wife and I have taken since we got married have been without our children. Usually, we just leave them at my parents’ house, which is not a big deal because they already have a bunch of kids running around. (“Where’s Adina?” “Right next to you.” “Where’s Daniel?”) A lot of people are worried about traumatizing their kids, but I don’t think ours noticed we were gone. But on all of those vacations, whenever we’d see a child misbehaving, my first thought was, “I’m so glad we didn’t bring our kids!” While my wife’s was, “I miss our kids! I wish they were the ones throwing a tantrum and refusing to walk!”

But I do think that we should bring our kids along on at least some of our vacations, and as soon as I mentioned this to my wife, she changed her tune. “A vacation with the kids?” she asked. “How’s that a vacation?”

Okay, so maybe it’s not. But it’s still a trip. Plus, there are certain things that you enjoy more when you take your kids along, because there’s no question about it: Children fill us with a sense of wonder. For instance, ever since we’ve had kids, I’ve been wondering where all our money went. You also tend to notice things when you have your kids along that you wouldn’t necessarily notice if you didn’t, such as horsies.

“Look at the horsies!” you yell, as you breeze past them at 60 miles an hour.

“Where?” your kids look up, a moment too late. They look around, as if there are going to be more horsies for the people who missed the first ones, and then they go back to fighting. That’s how kids entertain themselves on long car trips – by making up things to fight about.

“No I’m not! My hand is an inch away from her! It’s been like that for the past ten minutes!”

But kids fighting in the back seat is not a big deal, because there are ways of dealing with it. For instance, you can make the music louder. (This also works for strange noises under the hood.) Or else you can have the kids sing along, until you’ve heard the same kids’ songs so many times in a row that they stop making sense. (“Is Yankee Doodle calling the horse or the feather “macaroni”? And why is he calling it “macaroni”? Just because it rhymes with pony?”)

Another solution, if your kids won’t stop fighting, is to have them pack some toys for the car. But make sure to go through their selections first.

There are also plenty of games that you could play in the car, such as the geography game, wherein you name a location, and the next person has to name one that starts with the letter that yours ended with. Of course, that game gets boring after a while, because it turns out that a lot of geography begins and ends with “A”.

If there are only adults in the car, there’s usually not as much fighting, unless they’re lost. (WE ARE NOT LOST. THIS IS A SHORTCUT.) So you pass the time by eating. You also find out interesting little factoids, like how the average person can go through 4 bags of potato chips in an hour. My wife and I went to Baltimore once with an entire back seat full of nosh. I remember being concerned that when we finally did have kids, we wouldn’t have anywhere to put them.

Well, we didn’t. So now we have a minivan, and we spend a lot of time passing food back to the kids. Food stops kids from fighting, but it does generate other issues. We drove to my in-laws’ for Pesach, and, as there wasn’t much we could eat in the car, we gave each kid a yogurt.

Now, we’re not totally crazy. We do know that you don’t just hand a bunch of little kids some yogurt and expect them to eat it nicely while the car goes over bumps and dips and changes speeds at random intervals, such as when we miss the exit. (WE DIDN’T MISS THE EXIT. THIS IS A SHORTCUT.) So to minimize the mess, we poked a tiny hole at the top of each container, just big enough for a straw. And when we turned around not five seconds later, we saw that our two-year old son, Heshy, had a yogurt moustache AND a beard, and had his hand in the yogurt all the way up to his wrist. I think he was reaching for the fruit on the bottom. So we stopped at the next rest stop, by which time Heshy was covered from head to toe, and my wife had to dig for his clothes under the big pile of suitcases in the back. But I don’t know what she was complaining about. I was the one who had to hold his hand all the way to the restroom.

So yes, vacationing with your children leaves you with a lot of memories, and those memories are never going to go away. So it’s definitely a good idea to take kids. Actually, a better idea would be to take someone else’s kids, because everyone knows that kids behave better when they’re with adults that they don’t know. We should set up some kind of Child Exchange Program, which will include a service where we photoshop the correct kids’ faces into your pictures afterward. And if you take my kids, I’ll throw in a free waffle iron.

Thankless Jewish Jobs
Olivia Newton John’s Grandfather was a Nobel-Prize Winning Jewish Physicist
Don’t Believe in Other Gods Versus God is One
Seeing Without Eyes
Comments
MOST POPULAR IN Jewlarious
Our privacy policy
Aish.com Is Looking for Great Writers