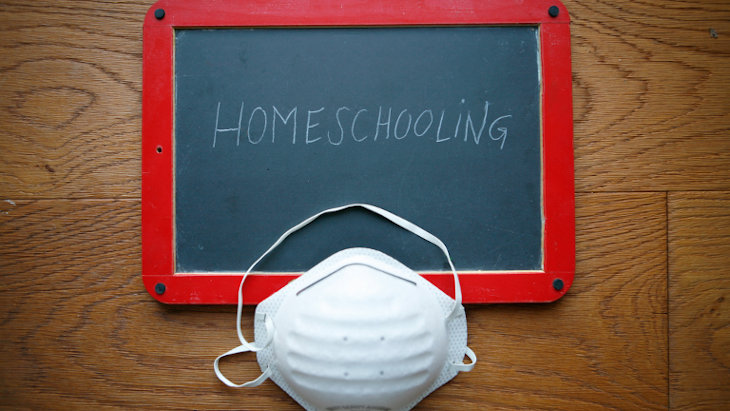 My advice to parents who are suddenly vice principals of schools at home.

Welcome to “How Should I Know?” – my advice column that you want to stay at least six feet away from, according to the WHO.

Why do parents keep complaining about homeschooling, as if they’re doing it all themselves? Aren’t the teachers all Zooming or whatever?

Yes, for the most part, they still have school. But for example, most of my kids’ schools use teleconferencing systems, which is where the kids all call a number at a certain time, and the number is busy. But eventually, they get through, and the teacher says the lesson into the phone, while the kids absently do what all of us do when we’re on the phone for 40 minutes with someone who won’t stop talking: Walk around the house.

And when they’re off the phone, they need something to do. They can’t go play with their friends. And I have to work too, you know. So mostly they entertain themselves by making noise, asking for food, and trying to injure themselves in the backyard.

“I don’t want to have to take you to the hospital right now!” my wife yells out the window.

Her yelling isn’t helping me either.

I feel like somehow, I’ve become a vice principal to a small, hilariously-underfunded school. All day long, I’m reminding kids to go to class, yelling at them to stop roaming the building during class, breaking up fights, printing out lessons, and saying, “No running in the hallways!” “No, you can’t go on the roof for recess!” “Get to Mincha.” “Daven Maariv.” And like a vice principal, I only know a passable amount about each subject, yet I’m roped in to substitute a lot anyway because I’m there and I’m an adult.

Plus I’m always doing dishes. And it’s always the same dishes. I used to do dishes once a day, after supper. Now, every single day we run completely out of milchig spoons by lunchtime. Not to mention that we’re buying more milk and eggs than ever, and everywhere I walk, I keep crunching on things. Usually cereal. No matter how many times I sweep.

Are they eating more than they used to? Everyone eats the same amount, regardless of where they are, right?

Of course they’re eating more. You know that constant battle you have with yourself when you’re working at home that you shouldn’t just eat because you’re bored? What do you think happens when all your kids are home all day?

Also, in general, every moment that kids are awake, they’re generating messes. So what happens if all their waking time is spent at home?

And there’s no accountability. If everyone’s home, you never know who left the crackers open, you never know who put away an open box of Rice Krispies upside down, and you can’t yell, “Who did this?” loud enough for everyone in the house to hear because everyone’s on the phone. You have to question each kid individually. Who has time for that, on top of everything else?

It’s not fair. We’re still paying tuition, and I get that the teachers are still teaching, but what’s the janitor doing? He’s not making house calls.

So basically, I’m a vice principal who also janits.

And by the way, after years of having principals talk down to me about how if my kids had better breakfasts, they would pay better attention in class, today one of my kids had eggs and noodles and a half a loaf of bread, and he’s still dancing around during class.

We’re making a socially-distanced wedding this month, and while people are zooming, it’s still sad that no one’s there. How do we brighten it up?

My answer to this question comes from a news story I read recently, titled, “Cardboard Cutouts Pose as Guests for Michigan Wedding Amid COVID-19”.

Now from the headline, I’m picturing huge blown-up photos of all your beloved relatives. But I guess the question is why. Who are you fooling? Even if you have a cardboard cutout of your beloved Bubbie, she doesn’t remember being at your wedding, and you know she wasn’t at your wedding. At most, you can do a huge family picture where it looks like everyone was there. Which I think is a great idea. And I’m talking about all the time. It would be great to make cutouts of the bride and groom so you can get all the pictures done before the wedding. Just have them pose together in their wedding clothes a week or two before, and bring it to the hall. I can’t even imagine all the pranks you can do with this afterwards, though it’s very likely the groom will end up marrying a large piece of cardboard.

Anyway, that’s what I thought the story would be about when I first saw the headline, but it turns out it’s not as exciting. Basically, a local packaging company donated the cutouts, which were just various brown cardboard-colored outlines that only look like there might be people there if you dim the lights, like, a lot. And it’s not anyone the couple knows. So if you do this, it’s basically going to be a creepy wedding, walking down the aisle past rows of cardboard.

But you know what? If she has a good veil, she’s really just making out outlines anyway.

Also, this really only works for an indoor wedding, especially if it rains. Or it’s windy. You cannot combine this with a backyard wedding.

“The guests are blowing away!”

And then after the wedding, recycling day is nuts.

Israel Brings Home Gold from Beijing
Blessing on Chewing Gum
Was Rahab a Prostitute?
Extras In Our Own Epic
Comments
MOST POPULAR IN Jewlarious
Our privacy policy