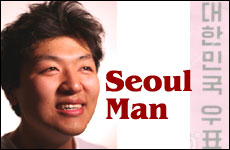 I have a message for my Korean exchange student, 20 years in the making.

Jung-Ju, where are you? I have something I would like to tell you.

When I was in high school, I applied to participate in an exchange program to South Korea. Eight kids were chosen from Vancouver, Canada, and eight kids from Seoul, South Korea. For a month our new Korean friends would live with us in our homes, follow our daily routine and live like “Canadians.” The following year, we were to do the same in Korea.

Even though it was 20 years ago, I remember it well. The Canadians kids went to the airport to pick up our new friends. Fittingly, my buddy’s name was Jung-Ju, although I was hoping for my trip to Korea they didn’t expect me to change my name to Richard-Buddhist.

Anyway, Jung-Ju and I had a nice time together. Sure there was the language barrier, but he tried his best to learn. I remember one time in particular when he put on a pair of knock off Ray-bans, he asked me, “Richie, what do you call these?”

Wanting Jung-Ju to sound cool I said, “We call them shades.”

Jung-Ju wasn’t the only one trying to learn a new language. I picked up a Berlitz language tape and listened to it diligently.

“How much is this – olmaeo”

But the real action didn’t happen until the next year when we went to Korea. In Canada, I was just a regular teenager. But in Korea, I was famous.

It was the early 1990s and apparently it was uncommon to see Western looking people walking the streets of Korea. So everywhere I went people gawked. They would come up to me and touch my skin, touch my hair, or try to speak to me even though the only English words they knew were “Hello” and “MacDonald’s.” There wasn’t much I could do but reply: “Well hello to you too Burger King.”

"Richard Rabkin, the people of Korea love your yellow hair!”

I usually went with Jung-Ju to school in the mornings, and on the first day they had an assembly in my honor. 2000 boys assembled in an auditorium while I stood on the podium with their principal who addressed them in Korean, looking at me every few minutes and smiling, in a creepy “hey, you want some candy” kind of way. At the end of the assembly, he switched to English and said, “Richard Rabkin, the people of Korea love your yellow hair!” 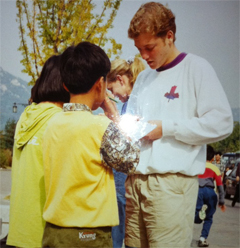 One day that I remember well, we went to an ancient city called Kyongju. If my skin color made me a rarity in Seoul, in Kyongju I was a unicorn. I was greeted by throngs of people trying to touch me and get my autograph. Just to add a little fuel to the fire I pointed to myself and informed my new fans, “Beverly Hills 90210.” That elicited some wild screams, especially from the teenaged girls. You’ve got to love globalization.

Needless to say, my days in Korea were a teenage boy’s dream. I was different – special. But being different, especially when you are a teenager isn’t always special. I learned that when our group went to see the production of Fiddler on the Roof. After the show Jung Ju asked me, “Richie, you are Jewish?” I nodded. Then pointing to Tevye and company, he added, “Like that?” With what felt like a hundred set of eyes now on me, time seemed to stand still. My non Jewish friends looked at me awaiting a response. All of the sudden, being different wasn’t as appealing.

“Like that?” I responded. “What do you think I am, some kind of fanatic?”

Me, Jung Ju and his classmates

The Canadian contingent rewarded me with a chuckle at my retort. Phew, pressure was off.

But Jung-Ju’s response was strange. He didn’t laugh. He almost seemed disappointed. And for years, I’ve always found his response confusing. Until now.

Recently, I saw on article on Aish.com titled Why Koreans Are in Love with Judaism. The article documents an interesting phenomenon. “The Talmud is a bestseller in South Korea - even the government insists it is good for you, and has included it on the curriculum for primary school children…The fascination with Judaism does not end there. Media outlets regularly run newspaper columns on ‘Jewish education’, weekly radio features, and television documentaries, all of them showing Jews in a glowing light.” The article ends with a quote from a Jewish resident of South Korea named Naomi Zaslow, "If you refuse a plate of pork ribs here, people will be dumbfounded. If you tell them it's because you're Jewish, they'll unfailingly look impressed and say: 'Oh, you must be very clever'."

When we stand up confidently and say that we are different, our non Jewish friends and colleagues usually respect us for it.

We’ve all had those moments when having to stand up and say that we’re different is uncomfortable. Whether we keep kosher and have to order a special meal, take the day off work or school for Yom Kippur, or whether we just answer really awkwardly when someone wishes us “Merry Christmas.” But in my experience, most times, when we stand up confidently and say that we are different, our non Jewish friends and colleagues respect us for it, even at times admire us.

That’s why I’ve been looking for Jung-Ju. I know we haven’t spoken for 20 years, but Jung-Ju, if you are out there, I would like to take another stab at answering your question: Yes, I am Jewish, like that. And proud of it.