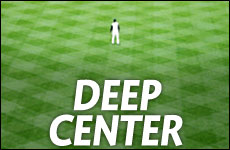 My kind of position. No pressure, no embarrassing errors, and no one gets hurt.

As a kid, I stunk at baseball. I was pudgy. I was clumsy. I was scared of the ball. In fact, I stunk at all sports. This not only proved personally embarrassing, but painful for the team forced to take me as their last pick. They'd need to find some position for me where I would do the least damage to their chances for success. In baseball that position is called "deep center."

It sometimes got lonely out beyond the horizon line, but I was happy out there.

Starting out from home plate towards second base, one arrives at the position by continuing past the second baseman, then past the regular center fielder. Eventually the cries of "keep going" fade away and you turn back to face the diamond. If you can see the curvature of the earth, you've arrived. Deep center. Sure, it sometimes got lonely out beyond the horizon line, and yes, there were times I was so far away I'd miss whole innings of the game. But in truth, I was happy out there. I'd think about life. I'd sing to myself. I'd wonder how the other guys got their mitts to work so effortlessly while mine was so uselessly stiff. Best of all there was no pressure, no embarrassing errors, and no one got hurt. My kind of position.

Many years later, now a grown man, I am staying over Shabbat with my mom while visiting Los Angeles on business. I've lost a fair amount of hair, I'm even "pudgier" than before, and I'm also starting to become "observant." How that happened is a long story, but suffice it to say that after a lifetime of complete assimilation, I've now got six months of traditional Judaism under my belt, I've got a tallis the size of a bed sheet, a shiny new pair of tefillin, and absolutely no idea what I'm doing with any of it. Still, the gear is impressive and as I explain it to my mom it sounds like I really know what I'm talking about.

"You know so much," she says in amazement.

She tells me about the handful of small orthodox shuls in the area, but I already know where I'll be going. Adat Ari El. It's is a huge place with stained glass windows and a Bar Mitzvah scheduled for this Shabbat. That's what I wanted. After all, you can't play "deep center" in a small shul. Everyone notices you. Everyone wants to know what position you play, what your lifetime stats are, which teams you've previously played for. But at Adat Ari El with a bar mitzvah scheduled I was assured of not being called to the Torah for an aliyah and not having to worry about embarrassing myself. I could take a seat in back and enjoy a nice restful Shabbat in "deep center." Perfect.

The temperature on Shabbat morning was already in the nineties as I left my mom's apartment and began the half-mile walk to Adat Ari El. I had my dark suit on which was even warmer than normal thanks to the king-sized tallis bunched up under the jacket. But I knew I'd be there in ten minutes, and for sure they'd have air conditioning, so everything would be fine as soon as –

Two blocks from my mom's apartment, I was standing in front of a retirement hotel where several old women sat in plastic chairs. One of them, dressed nicer than the others was struggling to rise.

"Guuut. You take me viss you." She was now halfway between sitting and standing. Easily a thousand years old, bent over in a "C" shape, with one hand clutching one of those four-pronged walkers.

"Um...well...okay, I guess. But are you sure? " I watched her take another step. We were still a good half mile from –

"-- don't listen to her," the other old ladies motioned for me to keep walking. "She's crazy. She'll never make it"

"Please...you vait," she took another step. "They hate me," she said about the others on the balcony. "They're mean to me."

I stood motionless on the sidewalk. The sun beat down. I felt a trickle of sweat beneath my blue suit, pinpoint oxford shirt, king-sized tallis. "Miss, it's getting kinda hot and Adat Ari El's a good half mile --"

"Please!" Her bony fingers clamped into my forearm. "Don't leave me."

She peered into my eyes, and whether it was palsy or iron-willed determination I felt her body shaking as she gripped my arm. "You do it," she whispered with fierce determination. "You daven viss me."

Trapped, I stood like a deer in the headlights, my mind racing desperately but now –

"-- guut," she decided, ending the discussion. "You come," she motioned to me as she turned and four-pronged toward the hotel.

I fought panic. In the 20 minutes it took for me to accompany Lillian Kimmel to her room I reassured myself over and over, "Be cool. She probably just wants you to keep her company for a few minutes, maybe mumble a couple prayers, and you're out of there. Ten minutes, tops."

Her room smelled like Lysol and dust. The shades were drawn and the Fedders QuietCool was blowing hot air. "Uh...I ah...I'm not very good at --"

"-- here. You do it." She plopped down in the only chair and handed me a worn blue siddur. "You sing. I vill follow."

Sing? I starred frozen. Who does she think I am?

By now I was sweating through the tzitzit, the pinpoint oxford shirt and the bedspread tallis which was still bunched up inside my jacket. I opened the unfamiliar siddur and somehow found a page I recognized and cleared my throat. "Shochen ad --"

"Dat's where you're starting?!"

I stared at Mrs. Kimmel, the mother of the rabbi. "Where would you like me to start?"

"Da beginning!" The woman was actually getting annoyed. "You do it!"

I searched through the prayer book again. It wasn't like the ArtScroll siddur I had become accustomed to. Not that I understood the Artscroll siddur or knew what I was saying, but it was orderly. You march along, one page to the next either reading the English or mumbling the Hebrew and eventually you come to Aleinu. Not so with this prayer book. I'm finding poems, meditations, a recipe –

"Here. I'll show you." She snatches the book from my hand and flips to a page. "Dis is vere you start."

But now the door s l o w l y opens revealing another woman who has to be 100 years old. "Vat's diss?!" she hollers, cocking a hearing aid the size of a transistor radio.

"He's making Shabbos," the mother of the rabbi yells back.

"Vait! I get my sheitel!" the centenarian begins the process of turning and starting back down the hallway which I see is filled with even more oldsters shuffling toward me and gesticulating, "Vait!...Vait!...I'm coming too!"

Other than giving God a good laugh, what really could have been the point of this debacle?

The details of what follows are lost in a blur of heat apoplexy. The next thing I remember was staggering back to my mother's apartment looking like someone had dumped a bucket of water over my head. I had been there for hours, struggling to find the right page, to find the right words, to sing the right melody and essentially doing a pretty rotten job. Plucked from deep center and repositioned at short-stop, I bobbled, dropped, and mangled every line drive of the morning Shacharit Service. And while the elderly Bonds, A-Rods and Jeters all thanked me when it was over, the truth was it wasn't much of a game. Any one of them knew more than I did, and don't forget, Mrs. Kimmel's son "was a rabbi."

In the end I couldn't help wondering "why." Other than giving God a good laugh, what really could have been the point of this debacle?

"Did you have a nice time, honey?" my mom asked as I collapsed on her couch.

"What was the Torah portion about?"

My eyes went blank. The Torah portion. I had forgotten all about it as had my captors or I'm sure I'd still be there. "I never got that far."

My mother gave me a confused look, but I was already back on my feet. "I think I'm going to lie down for a while," I said, collecting my Chumash and starting for the bedroom.

It was nice in there. Cool and air conditioned and relaxing. I read through the Torah portion in English. There was lots to get out of it, and lots surely went over my head, but the last line stayed with me. Apparently all the men must appear before God in the Temple, and not empty-handed. Each man must bring what he can individually give in order to receive a blessing from God.

Well, I figured I brought what I had today, and it's a long walk back to the outfield once you've found your way home from deep center.

Adam Greenman lives in Portland Oregon with his wife and daughter whom he adores. He is a recovering screenwriter who just graduated law school at 50 years old. Visit his site at www.script-mentor.com

Next Year in Jerusalem, Conclusion

The View from Heaven: An Interview with Rabbi Noah Weinberg, obm
It Takes A Lot Of Faith To Be An Atheist
How Instagram Brought Back This Nostalgic Soup
What Makes Eli Run?
Comments
MOST POPULAR IN Spirituality
Our privacy policy