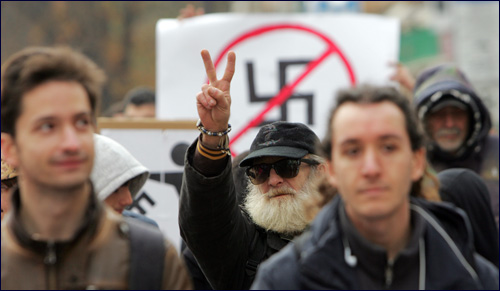 Neo-Nazis are planning a march against Jews in a small Montana town. Here's what you can do about it.

It seems like something out of 1930s Europe, but an armed demonstration against Jews is scheduled to take place in the small resort town of Whitefish, Montana. (Originally planned for Sunday, January 15, 2017, city officials recently said the demonstration's permit application is incomplete, so organizers are currently vowing to reschedule in February and make their planned march "even bigger than before".)

Whitefish has a tiny Jewish population of about 100 residents out of a total population of 6,000. It is also the home of Rand and Sherry Spencer, whose son Richard has become a leader in the American white Supremacist movement. (He has appeared on neo-Nazi shows and sites and has promised to “secure the existence of our people and a future for white children”, at times using language echoing that of Nazi Germany.) The Spencers say they “deeply love” their son, though they “unequivocally do not agree with...extreme positions.”

Sherry recently complained that local human rights activists were pressuring her to disavow her son’s racist beliefs publicly and to sell a building she owns in downtown Whitefish and donate some of the proceeds to anti-racist groups. Her allegation was picked up by a white supremacist website which asked its readers to “troll” the “Jews targeting Richard’s Spencer mother”. Although the human rights group that allegedly pressured Mrs. Spencer was not a Jewish organization, the site identified three Jewish women who were active in it, publishing their names, their photos with Jewish stars superimposed, addresses, and family details online.

The women immediately were inundated with death threats and hate messages, and the threats and intimidation soon spread to other Whitefish civic leaders.

In this climate of hate and fear, Andrew Anglin, the leader of a Neo-Nazi website who has called Jews a “vicious, evil race of hate-filled psychopaths,” filed paperwork to hold a march “against Jews, Jewish businesses” and their supporters. “For the next phase of our plan,” he wrote on his site, “we are planning an armed protest in Whitefish. Montana has extremely liberal open carry laws, so my lawyer is telling me we can easily march through the center of the town carrying high-powered rifles.” 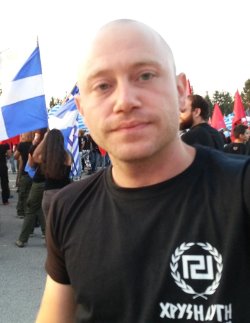 The plans for the march grew in frightening proportions. The planners announced they “will be busing in skinheads” from California for the event. Then it was announced that extremists from Britain, Sweden, France and Greece will participate. The planners also divulged that “a representative of Hamas will be in attendance, and will give a speech about the international threat of the Jews.”

Montanans have spoken out against the planned march. Montana Governor Steve Bullock, a Democrat, and Attorney General Tim Fox, a Republican, as well as other leading state officials from both parties penned an open letter declaring: “We offer our full support to the Jewish community, Montana families, businesses, faith organizations and law enforcement officers as they ensure the security of all our communities… We will address these threats directly and forcefully, putting our political differences aside to stand up for what’s right. That’s the Montana way, and the American way.”

Local anti-racism campaigners have also swung into action, holding a massive rally in Whitefish on January 7, 2017. Whitefish residents Jessica Loti Laferriere and Dominica Kau’ano Cleveras had watched with alarm as their town became embroiled in news reports about Richard Spencer’s repugnant views. Weeks ago they started planning an event in Whitefish called “Love Not Hate”. 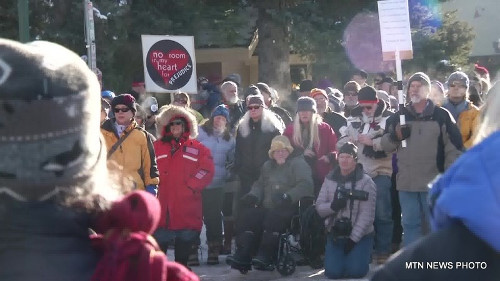 “It was just my friend and I,” explained Ms. Laferriere in an exclusive Aish.com interview, “and we were concerned about all the news reports. We felt it wasn’t representing us, that we really are a more accepting and loving community than the way Whitefish was being portrayed.” 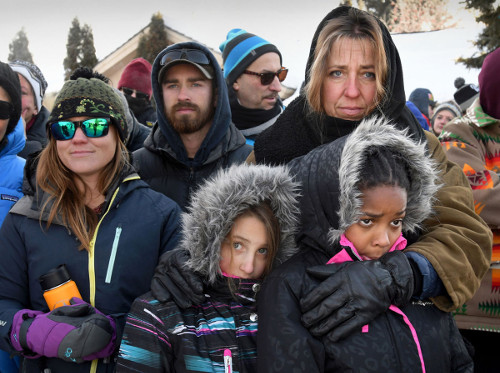 When the anti-Jewish march was announced, interest in the planned Love Not Hate rally skyrocketed. Residents donated their skills and funds, and local businesses supported the event. “So many people contributed and turned it into more of a festival,” Ms. Laferriere said. Despite sub-zero temperatures, 400 people attended the event. Francine Green Roston, a Jewish community leader in Whitefish, addressed the crowd speaking through tears, “In our darkest nights this winter, this state, our elected representatives...you all lifted us up… You let us know we are not alone.”

In a state with only 1,500 Jewish residents, Rabbi Chaim Bruk runs Chabad Lubavitch of Montana, and often drives for many hours to visit far-flung communities. During these terrifying weeks, Rabbi Bruk has been a calming presence, listening to the fears of many of Montana’s Jewish residents.

“I think that historically when there’s anti-Semitism,” Rabbi Bruk said in an Aish.com interview, “it brings out the best in the Jewish community.” The Jew hatred in Whitefish has sparked a desire to do something constructive to stand up to hate. “I’ve seen a level of outreach and unity that’s unprecedented.”

Noting that Montana historically has been a very welcoming place for Jews, Rabbi Bruk explains that most of the trouble is being stirred up by outsiders. The few Jews in Whitefish and elsewhere in the state have not been granting interviews, hoping to deny the march organizers the attention they crave. Instead, some of Montana’s Jews are trying to counter the extreme anti-Semitism directed their way by strengthening their Jewish connections.

Within the past week, fellow Orthodox rabbis, including Rabbi Herzfeld of the National Synagogue in Washington DC, have reached Rabbi Bruk to find out what they can do to stand with Whitefish’s beleaguered Jewish community. They offered to come to Whitefish to march or demonstrate.

The counter to darkness is light.

But the Jewish community in Whitefish made clear they don’t want any additional attention drawn to the planned march. Rabbi Bruk had a different idea. “The counter to darkness is light. We’ve been reminded of our Judaism by all this, and if we’re going to be reminded of our Judaism, we might as well experience that Judaism in all its glory.”

He proposed a Chumash campaign, raising funds to provide every Jewish household in Montana with a beautiful, English-language Jewish Bible complete with Jewish commentaries to make it easier to understand.

The results were immediate. Jews and non-Jews from across the country have contributed to the Chumash campaign. Rabbi Bruk characterizes it as an “outpouring of love”. Within days, supporters had pledged over 150 Chumashim. “We want to counter this hatred, so let’s do it in a constructive way.” Instead of weakening Jews’ connection to Judaism, the rabid anti-Semitism directed at Whitefish has sparked a surge in Jewish interest.

Whitefish community leaders and members of its small Jewish community are trying to avoid giving the anti-Jewish protestors any more attention. Instead, they are responding on an individual level, expressing tolerance and solidarity, and also participating in the Chumash drive.

“There are 1,500 beautiful Jewish households in Montana who are seeking yiddishkeit (a connection to Judaism),” Rabbi Bruk said, “and everyone is welcome to join the bandwagon and help them.”

Kippahs to the Rescue

Why Not Intermarry?
Is Grease the Word?
Dried Fruit Compote
Scientific Curiosity and the Divine Encounter
Comments
MOST POPULAR IN Israel
Our privacy policy
Aish.com Is Looking for Great Writers