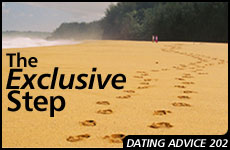 What's the best way to find out if things are headed toward marriage, and not a dead end?

I am in my 40s, divorced for a long time, and would love to meet the right one and get married again. I have been dating a man for nearly a year. We actually dated each other a few years ago, but stopped for various reasons. We met again, started to talk, and decided to begin dating again.

We haven't been "exclusive" during our courtship, but I am at the point where I would like us to only date each other and see where this is going. How do I get him to be "exclusive"?

I am tired of dating men and getting nowhere with them. What's the best plan of action?

The answer is very simple. You have been dating this man almost a year and you have no idea of what direction the two of your are headed. It sounds like you are spinning your wheels. You think that by getting this man to be exclusive, and going out with each other for a longer period of time, this courtship will lead to marriage.

However, it doesn't work that way (unless the people involved are very young, and moving from being not yet ready for marriage to being ready for marriage). Today, people either date with the goal of getting married, or they date for socializing and companionship. They don't change their orientation in the midst of a courtship, no matter how much they like their dating partner.

We always advise people who would like to meet and marry the right person to clarify the reason they are dating from the outset -- that they would like to find a marriage partner.

That time has long passed for you in this situation, but it is not too late for the two of you to discuss where this is al heading. But you have to do this now, not in a month or two.

You can tell him: "I am dating for marriage and I would like to see things move forward in that direction. I'd like us to learn more about each other to see if we are right for each other. If you do not have a similar goal, then we should stop seeing each other."

You are not going to change his mind. It just doesn't happen.

If he is not interested in marriage, then you have to move on. You are not going to change his mind as time goes on. It just doesn't happen.

If this courtship does not work out for you, you need to change your approach with future dating partners. If someone seems to have potential, we suggest that by the second or third date, you tell him, "Even though it is too early for us to know where this will lead, I want you to know that I am dating to find the right person to marry. If this has promise, I would like to develop it in that direction. I'd like to know the reason you are dating." If a man doesn't share your goal of marriage, or changes the subject, or says something vague about wanting to get married "some day," that means that he is not for you.

Don't worry about scaring a date away. You are not telling him he's "the one" -- you are leaving that open. And besides, if he does not want to get married, let him run -- you shouldn't be dating him. On the other hand, if he has a goal of getting married, he will tell you -- and you will be in a far better position.

Dating Advice #200 - Spinning Wheels
Why Are The Prayers Of Yom Kipur So Repetetive?
Ha'azinu 5783: A Time for Unity!
Twisted Thinking
Comments