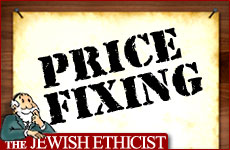 Restraining trade is sanctioned only when it serves the public interest.

Q. Some merchants in my area have agreements to fix prices. Is this ethical?

A. The Talmud relates the following incident of collusion which took place in Babylonia about 1500 years ago:

Two slaughterers made a deal that if either would work on the other's [designated] day, [the other] could tear up the hide. One of them went and worked on the other's day, and he came and tore up the hide. They went before [the judge] Rava, and Rava made him liable to pay [for the damage]. Rav Yeimar bar Shlamia objected to Rava based on the law, "They [community members] may establish punishment on their regulations". . . Rav Pappa said . . that's only if there is not great person, but if there is a great person they don't have the authority to make this condition.

The full explanation is as follows: The two slaughterers agreed to limit competition by dividing up the days of the work week between them. They also agreed on an enforcement mechanism. Since Jewish law views a profession or guild as an autonomous community with the right to make and enforce rules and regulations, Rabbi Yeimar assumed that this agreement was binding. (Evidently the two slaughterers were the only ones in town and were thus considered like a small guild.) But Rav Pappa pointed out wherever there is a recognized authority, any such agreements are subject to the approval of this "great person" -- in this case, Rava.

Jewish law doesn't have a blanket prohibition against fixing prices and wages; skilled artisans are allowed to make regulations intended to advance their field and this may include prices. However, these regulations are subject to mandatory oversight to ensure they are consistent with the public interest; otherwise they are null and void. Note that Rava didn't merely order the two to cease their agreement; he ruled that it was void and that the enforcement mechanism was invalid and considered a tort. Likewise, Rav Pappa doesn't say that Rava has the authority to nullify the condition; he states that there is no authority to make the condition in the first place given the presence of someone capable of exercising oversight.

Nowadays this oversight function is fulfilled by antitrust commissions. Price fixing among retailers is among the kinds of restraint of trade forbidden by antitrust regulations and enforced by the law. So such agreements would violate the condition requiring prior approval of a duly authorized overseer. In the hypothetical case of an autonomous Jewish community they would need prior approval of the local Jewish court or Beit Din.

Another relevant consideration here is that only members of a trade are considered an autonomous community. This makes sense because we want to encourage them to work together, promote advanced standards and training, and thus develop their skills But it is questionable if retailers would be considered a community at all. So even in the absence of an authority I don't believe that retailers would be empowered to enforce any kind of price fixing agreement.

There is some solace in the fact that most price-fixing agreements of this nature fall apart eventually, as the temptation to defect becomes great. But the customer certainly loses in the meantime, and even when the arrangement becomes rickety prices are still affected. (Some secret cartels, like that between Westinghouse and GE in the 1950's, can last successfully for years.)

Conclusion: Jewish law confirms that any price regulation among retailers should be subject to appropriate regulatory oversight to ensure that it does not oppose the public interest.

Why We Fight5 min read

Reading the Other Side1 min read