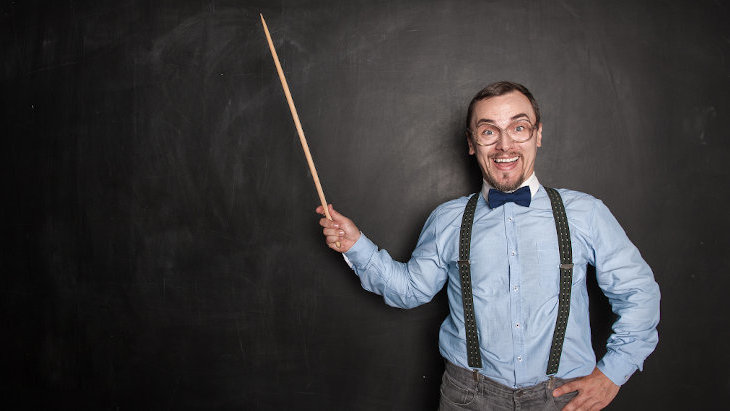 Parents, whatever you share with your kids at home will be shared in class. That’s a promise.

As a teacher at the local Jewish day school this year, I like to think that I was prepared. I have had many years’ experience in Jewish schools both as a child and yes even as a teacher. Looking back, very little has changed. To bring you the life of the Jewish school student, allow me to look back thirty years to my childhood.

One Thing No Student Wants to Hear is Homework

This is why no child ever wants to help their parents and take out the trash. It’s work at home. Parents have tried to call these “chores.” A nice attempt at new branding. But kids are smarter than that. They know their teacher is somehow involved.

“Home” and “Work” are two words that never should have been put together. Homefun is what it should be called. “Your homefun is to come back tomorrow with five pages written on King David and how he interacted with his family.” It’s so much fun that fun is in the word!

Some Kids Stretch to Confuse the Teacher

How am I supposed to know they’re not raising their hand? When you’re a teacher, they don’t warn you about that. Nobody tells you about yawning in teacher school.

Kids Lie About Their Names

Every child has an alias when a substitute comes. You don’t want to get caught for doing anything you did to a substitute.

I still ask why that kid changed his name to Shlomo. There are better aliases in a Jewish school. Come to think of it that’s probably how I always got in trouble. Kids used my name when I was home sick and we had a sub.

As long as it’s candy, they love it. They’ll eat lettuce if it’s candy.

Jewish education is based on candy. Without candy, no child would love school. We put honey on the first letter of Breishit, when a child starts learning. When a kid learns Torah for the first time, we make sure it’s sweet. Would no child want to learn Torah if they didn’t want to eat it? No kid would want to go to shul if there wasn’t a candy man. Little kids love eating everything. I bought my 11-month-old nephew a Tonka Truck. What did he do? He tried to eat it. Please note: do not buy young children a siddur because they will try to put it in their mouths. And paper with no flavor or schmear is apparently not very appetizing.

All Young Children Seem to Be in a State of Mourning

Until fourth grade, you have to sit on mourner chairs. Chairs have to be tiny. Tables have to be mourner height as well. Even the bathrooms are made for mourning. They’re probably mourning the first day they got their homework.

All Kids Love the Word Awesome

The word “awesome” will be used by kids forever. “Going on a field trip. That’s awesome.”

Love Saying Everything Out Loud

Every prayer must be said out loud. I don’t think there is one Jewish teacher that trusts kids enough to say anything quietly.

Saying everything aloud takes time. And that’s good because nine hours a day is too much time for teachers to figure out what to do. Sing everything in Hallel, that’s the curriculum today.

Whenever You Have a Substitute All Rules Do Not Exist

The concept is that this guy can’t give you a test, so who cares. Jump on desks. Stand on tables. Throw stuff at the teacher. It’s all fine if they have no power to grade you. Substitutes are meant to take abuse. That’s another reason why they bring in people that are retired or need money really badly. I know this because as a frequent substitute teacher myself I have many times had foreign objects spat at me by Jewish children who all have the name Shlomo.

Anything to Disturb Other Classes is Time Well Spent

It’s a tradition. Disturbing another class is very important. Open up the door to another class, scream something and run. Why? I have no idea.

Anything that Is Not Class is Exciting in Class

They’re enamored by anything that is not the teacher. Person in hallway, they run to see who it is. A police siren on the street and the class is over.

There is nothing more enjoyable than passing a note in class. I read one student’s note that said, “The commentator, Rashi, beautifully expresses how man dealt with murder when it comes to Cain and Abel.” They could’ve just raised their hand and shared that with the class and I would have given him an “A” because I was asking that question. But it was the defiance. So I gave that kid a “D”.

Crabsoccer, Newcomb, sidewalk tennis, pickleball. They have all accepted that they are not going to be real athletes.

All Students Lean Back in Chairs

Anything dangerous, they do it. They lean back in chairs. They go to the jungle gym and run into a pole. See a door and walk into it. So why can’t they just see a book and open it?

We know who you are voting for. And you should be ashamed of yourself.

Anything your child says in class is your opinion. You said what about the Affordable Care Act? You think Bibi is a what?

Actually since I am an undecided voter I find this very helpful. The most convincing student in my class gets my vote.

“This is my dad’s riffle.” How did he get that into school? Kindergarten needs better security.

All Kids Get Excited About Recess

They run outside and do nothing. The idea is to go outside, organize a game and start it a minute before the bell rings. The achievement is making the teams for the kickball game. If you get in a kick, that’s awesome.

The bad news is that there are some old habits that do die hard. For example, to this day, I need candy to learn Torah. No lollipops, no weekly Torah portion.

The good news is that every child is exactly like I was.