Chinese Decide to Eat Jewish Food on Their Holidays 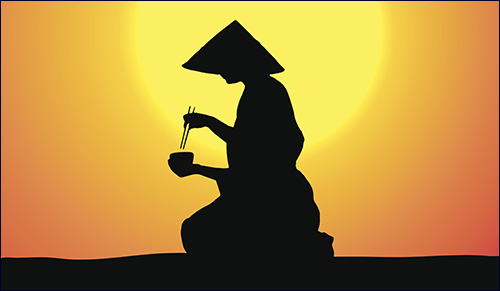 After all of these years of Jews eating Chinese, Chinese decide to return the favor.

You know the old expression: “The only certainties in life are death, taxes, and Jews eating Chinese food on Christmas Eve.” Well, I may have tweaked the expression a bit, but it’s still true. So, it’s only fair that the Chinese have now decided to eat Jewish food on their holidays. A shock, I know, but not quite one of the signs of the Apocalypse. And I would have never known about it if not for my subscription to the Chinese Jewish Times. Before we explore this latest development, though, let’s take a look back at how the whole Jewish/Chinese cuisine connection started.

Note to self: develop “Fortune Rugelach”; it could be big.

Set your time machine to 1910, New York, Lower East Side, where Jews and Chinese were the two largest non-Christian immigrant groups. Plus, Chinese restaurants were open Sundays and holidays when other restaurants would be closed. There, Jews wanting to assimilate into American life found acceptance and a whole new food beyond their familiar kosher cuisine. And while Jewish law prohibits the mixing of dairy and meat dishes, this was no problem in Chinese restaurants, where dairy is not generally one of the ingredients. Of course it didn’t take long before kosher restaurants were serving Chinese food, providing employment for countless Chinese chefs. American Chinese community: You’re welcome!

In any case, it was only a question of time before some curious Chinese folks said to themselves, “Hey, if the Jews are getting this much pleasure out of our food, don’t we owe it to ourselves to at least try theirs?” A vote was taken, an exploratory committee was formed, and a date set to venture forth into a chopsticks-free zone, a Jewish neighborhood, and go where few Chinese had gone before – to a Jewish deli.

Immediately, the committee was struck by the similarities between Chinese and Jewish deli cuisine. Before even entering the deli, members of the committee noticed that while there were no smoked ducks hanging in the front window, there were hanging salamis and bolognas. There were no egg rolls to be found, but there were blintzes. No won ton soup, but there was matzoh ball soup. No egg foo young, but plenty of lox and eggs. Both cuisines even featured their own versions of whitefish. And the deli even had its own version of Chinese Chicken Salad called, creatively, Chinese Chicken Salad.

Of course, there were clear differences as well. Obviously, not a shred of shrimp, lobster or crab to be found in the Jewish deli. No colorfully named dishes like Ants Climbing Trees. And, of course, no dessert items containing one’s fortune on tiny bits of paper. (Note to self: develop Fortune Rugelach; it could be big). No dishes named after military leaders, such as General Tsao’s Chicken. No chicken and mushroom dishes exotically called Moo Goo Gai Pan. No dishes named to make pre-teen boys crack up, such as Pu Pu Platter. No food items meant to be spooned onto thin pancakes before consuming, such as Moo Shu Beef.

Still, the historical connection between the two groups was there, the committee found the food tasty and exotic in comparison, the waiters friendly, and the meat plentiful. They returned to their headquarters and wrote up a report recommending that the Chinese try Jewish deli food on Christmas. This past Christmas was the first year this occurred, with some Chinese trying Jewish deli food on Christmas Eve. Here are some initial comments from the Chinese after having experienced their first Jewish deli Christmas Eve meal:

“I enjoyed it overall, though it was a bit bland. I missed my favorite sauces: soy, oyster, black bean, garlic, chili, sesame and hoisin. Not to mention Star Anice, Five Spice and soybean paste. The big miracle is not how the Hanukkah candles stayed lit for eight days; it’s how Jews can cook and eat without using our delicious sauces and spices!” – Jerry Ho.

“Our waitress reminded me of my mother. She told me I was too skinny and needed to eat more. And she told me to sit up straight, stop checking my email on my cell phone, and eat with an appetite. And she referred to me as ‘Bubbeleh.’ What does that mean?” --Eddie Fong.

“Admit it – Jews put something addicting in the bagels and lox. Because since I tried it on Christmas Eve, I have to have it every morning for breakfast. My friends think I’m becoming Jewish. They offered to chip in to have a bar mitzvah for me, but I told them a 47 year old man is too old to have a bar mitzvah. Isn’t he?” – Brian Chen.

“I liked the matzoh ball soup. It’s everything I look for in a romantic partner – warm, comforting, tasty, and always there when I need it. Are soups copyrighted? Because I’m seriously thinking of producing a Chinese version of matzoh ball soup for our restaurants. I think it could catch on.” --Cathy Lee.

“I learned the difference between knish, kreplach and kugel. My ancestors would be so proud of me.” – Jennifer Yang.

“I have been a fisherman for 27 years and have never spotted a gefilte fish until this past Christmas Eve at Shlomo’s Deli.” -- Vincent Cheung.

The Chinese decision to eat Jewish food on their holidays can only be a good thing for promoting world peace and understanding. I would therefore like to extend an invitation to our fellow citizens from Italy, Mexico, Spain, Thailand, Guatemala, Russia, Germany, Ireland, Sweden, Egypt, New Zealand, France, and any other country – to try our Jewish food on one of your slower holidays. You might be pleasantly surprised, learn something interesting, and in a small way promote something good among nations. In fact, I think I’ll head out to a Cuban place right now. I could use a mojito with some sweet plantains. But, then, who couldn’t?

I’m Sorry for My Selichot