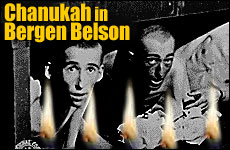 The rabbi was desperately looking for a small light in the sea of dark despair.

“In their very essence a Jew and despair are contradictory. They simply cannot co-exist together.” Rabbi Shraga Shmuel Schnitzler, who went by the more familiar name of Rabbi Shmelke, looked around the barracks to make sure that the others had understood his point. Amidst the crowd of weary faces that stared back at him, there were a few who were nodding their heads in agreement. Perhaps they, too, had been chassidim in another life – the life that existed before the war – and so they could appreciate the tales that Rabbi Shmelke told about chassidic Rebbes of former days.

Rabbi Shmelke didn’t tell his stories just to pass the time. His job, as he saw it, was to keep up the spirits of the Jews who were imprisoned in the Bergen Belsen concentration camp. That job would have been much easier if they were prophets, since the end of the war was just a few months away. But during that Kislev of 1944, the situation seemed as hopeless as ever. Even the thought of Chanukah, which was fast approaching, couldn’t dispel the gloom for most of them.

For Rabbi Shmelke, it was a different story. Since the beginning of the month he had been busy preparing for the holiday. He asked the same question to everyone he met: “Can you get us a little oil? Do you someone who works in the kitchen?”

The answer was always the same: No.

Chanukah was only a few days away and he had to find some oil.

With dismay, he realized that Chanukah was only a few days away. He knew only too well what would happen if he couldn’t find any oil. Many of his fellow prisoners were clinging to life only by a slender thread of hope. Once that thread was snapped, they would succumb to the deep sea of dark despair that threatened to drown them. So he had to find some oil. Even if he found only enough oil to kindle the first Chanukah for a few seconds that would be enough. But no Chanukah lights? That wasn’t an option.

The day before Chanukah Rabbi Shmelke was at work – his “other” job in the camp was to remove dead bodies from the barracks – when he received an order to go to the last barrack, where some people had died during the previous night. While he walked across a field his foot got caught in a small hole in the frozen earth and he almost fell. He removed his foot from the hole and noticed that there was something buried inside. After making sure that no guards were watching him, he knelt down to see what it was.

He pulled out a small jar from the ground. Inside was some congealed liquid. Oil, he whispered. Oil for Chanukah!

Rabbi Shmelke then reached his hand inside the hole a second time. To his delight he discovered that the hiding place contained more surprises. He pulled out a carefully wrapped package and quickly undid the paper wrapping. Inside were eight little cups and eight thin strands of cotton.

It was obvious that some Jewish prisoner had buried this little menorah and the oil. But who was he? And where was he? Had he been transported to another camp? Had he died?

Although Rabbi Shmelke desperately wanted oil for his own barracks, he sincerely hoped that the Jew who had buried these things was still alive. Perhaps he was still in the camp and he would come back the next day and search for the treasure that he had so carefully hidden. So Rabbi Shmelke carefully reburied everything. But for the rest of the day and night, he asked every Jew that he met the same question: “I found some oil and a menorah. Maybe you were the one who hid them?”

The other prisoners looked at him with sad eyes, certain that at last the horrors of the Rabbi’s work had destroyed his mind. “No, Rabbi,” they said, one after another. “I didn’t hide any oil. I didn’t hide a menorah.”

The next night, however, they discovered that Rabbi Shmelke hadn’t gone mad. When they returned to their barracks after the evening roll call they saw, to their amazement, a little menorah standing on one of the bunks. To their even greater surprise, one of the cups was filled with oil!

Rabbi Shmelke recited the blessings and then kindled the light for the first night. The group watched in silence while the tiny flame fought its eternal battle against the surrounding darkness. Some smiled, others cried. All felt a sweet spark of hope revive inside their embattled and embittered hearts.

Their own personal miracle was repeated on each night of the holiday.

Their own personal miracle was repeated on each night of the holiday. And then a few months later, in April 1945, an even greater miracle occurred. Germany surrendered. The war was over.

Rabbi Shmelke was one of the fortunate few who survived the war. After Bergen Belsen was liberated he returned to Hungary, where he served as a spiritual leader for other survivors and became known as the Tachaber Rav.

Several years later he made a trip to the United States, and while he was there he paid a visit to an acquaintance from the “old country” – Rabbi Yoel Teitelbaum, the Satmar Rebbe. While they reminisced, the Satmar Rebbe mentioned that he had also been a prisoner in Bergen Belsen.

“I was rescued on the 21st of Kislev, four days before Chanukah," said the Satmar Rebbe. "Before I found out about the rescue plan, I made provisions for the holiday. I bribed several camp officials and put together a package of oil, cups, and wicks, which I then buried in a field. I always felt badly that my little menorah was never put to use.”

Rabbi Shmelke smiled. “Your menorah was used. It dispelled the darkness for hundreds of Jews and helped at least one of them survive the war.”

Libi Astaire is an award-winning author. Her book Day Trips to Jewish History takes a look at lesser known aspects of Jewish history, including the story of the crypto-Jews of Spain and Portugal. She is also the author of The Banished Heart, a novel about Shakespeare’s writing of The Merchant of Venice, and the Ezra Melamed Mystery Series, a Jewish historical mystery series set in Regency England.