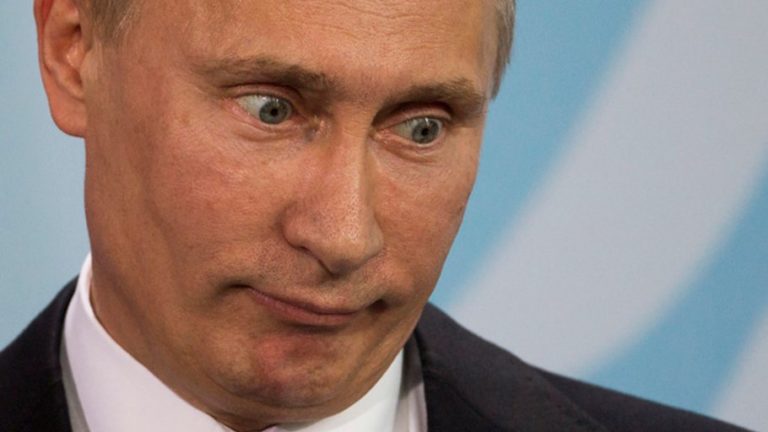 What do you get for the dictator who has everything?

How many times have we been in this situation? We’ve befriended one of the world’s most notorious dictators, gotten to know him well, established a genuine connection where we truly think we know him – and then Chanukah rolls around and we’re at a complete loss as to what our favorite strongman would appreciate as a gift? Hey, been there, been challenged by that. But there’s no need to feel fertummelt. Below, I’ve selected five current dictators and have provided appropriate Chanukah gift suggestions for each of them. The thought being they’ll be so appreciative of the wonderful gifts, that they’ll be kinder to Jews and perhaps, by extension, kinder in general. So, shoot me, I’m an optimist. (For any dictators reading this, I did not mean “shoot me” literally.)

Give Vladamir Putin the opportunity to slow down at a relaxation retreat.

Russia’s Putin clearly sees himself as an outdoorsy, sporty, macho tough guy. Over the years, he’s interacted, often bare-chested, with wild animals, flown military jets, done martial arts, rode horses, gone rafting, rode a motorbike, shot eco-tracking darts at whales from a crossbow, co-piloted a firefighting plane, drove a racing car, and rode in a motorized hang glider. Clearly, Putin needs to balance out his wild macho yin with some gentle, contemplative yang. I suggest a gift certificate to the Hazon Meditation Retreat at the Isabella Freedman Jewish Retreat Center. During this silent meditation retreat, Putin will be given the opportunity to slow down and explore life’s deepest truths in a warm and supportive Jewish environment. Vlad will be guided through a daily schedule that includes several hours of sitting and walking meditation, as well as soulful musical prayer, supportive group sessions, and optional yoga. He’ll return to the motherland a much more centered, rested, peaceful and loving brutal dictator.

What do you get for a North Korean dictator who holds the titles of Chairman of the Workers' Party of Korea, Chairman of the Central Military Commission, Chairman of the State Affairs Commission, Supreme Commander of the Korean People's Army, and member of the Presidium of the Politburo of the Workers' Party of Korea, the highest decision-making body in North Korea? Hmmm, let’s look at his record. Although Kim Jong-un implemented some economic and agricultural reforms, human rights violations and brutal suppression of opposition continue to be reported under his rule. He also continued the country’s nuclear testing and development of missile technology in the face of international condemnation. Well, clearly, then, the ideal Chanukah gift for Kim would simply have to be a gift certificate to a decent hair salon. Not, mind you, that there’s anything wrong looking like two black croissants died on your head. If that’s the look you’re going for. I’m just saying there may be room for improvement.

Rodrigo Duterte is clearly no fan of the three-strikes-and-you’re-out concept of justice. He was elected president of the Philippines in 2016 on the strength of a campaign that promised execution of drug dealers and other criminals. So far, his war on crime has already resulted in the killing of thousands of people across the archipelago country. As a result, his ratings have since continued to shrink – falling to 65% in the first quarter of 2018 and to 57% in the second quarter. The ideal Chanukah gift for the Philippine strongman would have to be one that would raise his approval ratings. And obviously, only Latke Party in a Box could do exactly that. It’s everything you need to host your own potato pancake party, which Duterte would host at his palace. This attendees, chosen by national lottery, would then see a more human side of Duterte, especially if he spoke some Hebrew and Yiddish while cooking. They would then return home with happy faces and bellies, and a whole new perspective on their leader.

Xi Jinping is the top leader in the Communist Party of China and the President of the People’s Republic of China. Although he earned criticism for human rights violations and disruptive economic regulations, Xi also continued the country's rise as a global superpower. His name and philosophy was added to the party constitution in 2017, and the following year he successfully pushed for the abolition of presidential term limits. That means he could very well be President for life. Think of the work. Think of the pressure. He’ll need to relax. And since China has more than a few good beers of its own, perhaps Xi would be open to a good Jewish beer to celebrate the Festival of Lights. Shmaltz Brewing Company produces the successful line of He’Brew Beers. He'Brew Beer is widely recognized for its playful yet earnest study of Jewish, world, and pop cultural histories. And Xi can rest easy with the assurance that all He'Brew Beers are certified Kosher by the Kosher Supervision of America. L’chaim, Xi!

Mainstream media has described Venezuela’s Nicolas Maduro as a dictator. To back that up, in May of 2018, a board of independent experts designated by the Organization of American States published a 400 page report stating that Maduro was the leader of human rights violations in Venezuela, using authoritarianism to maintain a hold on power in the country. Oh, you want details? How about that the Board concluded that Maduro was "responsible for dozens of murders, thousands of extra-judicial executions, more than 12,000 cases of arbitrary detentions, more than 290 cases of torture, attacks against the judiciary and a 'state-sanctioned humanitarian crisis' affecting hundreds of thousands of people"? Other than that, though, he’s a delightful, sensitive and caring human being. So, what do you get for the man who kills everything? How about a digital mix tape of songs that may either subtly remind him of the damage he’s doing, or excite him even more about the damage he’s doing? Possibilities to include: “Killing Me Softly”, “Killer Queen”, “Dead Man’s Party”, “Only the Good Die Young”, and, of course, “Another One Bites the Dust”.