At one California college, anti-Semitism repeatedly rears its ugly head.

College is a time of making new friends, expanding horizons, and learning how to get along with others.

For Bryan Turkel, a senior at Claremont McKenna College near Los Angeles, this week was a grim lesson in how U.S. college campuses are falling short of these ideals – especially when it comes to anti-Semitism. 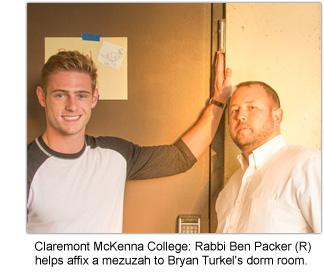 In three separate events this past month, vandals:

Following the first incident, the local Chabad replaced the one mezuzah with 30 mezuzahs – for the dorm rooms of every member of Turkel's AEPi chapter (the Jewish fraternity Alpha Epsilon Pi with 10,000 member students worldwide).

"The proper response to such a situation," says Rabbi Ben Packer of Jerusalem, "is to increase that same Jewish identification that the anti-Semites are trying to blot out."

Packer, the manager of Jerusalem's Heritage House youth hostel who'd become friendly with Turkel during his visit to Israel, hand-delivered an Israeli flag to replace the one torn down from Turkel's room – plus another 9 flags for the rooms of Turkel's AEPi brothers.

When the idea was raised of increasing public identification with Judaism and Israel in response to the attack – were the fraternity brothers concerned about becoming the next victims?

"My brothers were all incredibly supportive. Nobody expressed any fear of being targeted in a hate crime," Turkel told Aish.com. "We were more focused on how to provide a strong response that would send the right message on behalf of the Jewish community – the message that no threat or intimidation can stop us from proudly displaying our Jewish identity."

Turkel's response is the exception, given that U.S. college students have become increasingly reluctant to openly display their Jewish identification. This past year has seen a disturbing rise of anti-Semitism on American college campuses:

Things have gotten so bad that the Simon Wiesenthal Center has launched a mobile app, CombatHateU, giving college students a way to immediately report incidents of anti-Semitism on campus.

Students can't be expected to confront this alone.

Turkel describes these acts as "a merging of anti-Zionism and anti-Semitism where Jews are intimidated and attacked for their support of Israel." He pointed to the propensity of anti-Israel groups such as Students for Justice in Palestine to stage "die-ins" outside of Jewish religious organizations, and still call it "anti-Zionism."

Another member of AEPi, Elliott Hamilton, pointed out that "by stealing the mezuzah, it cannot be deemed as simply anti-Zionism but rather undisputed anti-Semitism."

Signs indicate that campus anti-Semitism is reaching epidemic proportions. A comprehensive 2011 study of Religious Tolerance on Campus, which surveyed over 1,400 students in the United States, found that over 40 percent of students confirm anti-Semitism on their campus.

What steps can be taken to address this problem? Packer says that "students can't be expected to do it alone," and need more of the resources and support provided by national Jewish organizations such as Aish and Olami. 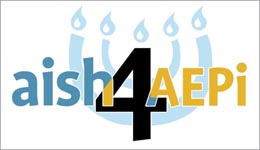 Rabbi Chananel Weiner of Aish Boston, who runs the "Aish4AEPI Israel Experience," concurs. "There have always been Jewish students on campus afraid to identify with their roots. But today it's worse because many Jewish students would like to proudly identify but simply don't know how to respond to the anti-Israel campus culture."

What is the solution?

"These students need our help," says Rabbi Weiner. "We have to engage them in meaningful Jewish experiences that empower, inspire, and educate. If we fail to intervene and provide more resources, we are at risk of losing a generation of Jewish students."

The root of the problem, many contend, is with the academics who are often at the forefront of anti-Israel activities such as the BDS boycott movement.

Turkel blames the hate environment on "a twisted interpretation of academic freedom that leads many intellectuals to defend these hateful messages, while at the same time calling for censorship of Zionist or Jewish speakers."

As student Elliott Hamilton says: "Despite an academic community that preaches liberal values of tolerance and equality, the Claremont Colleges rarely discuss violations of human rights in Muslim countries, even genocidal actions of the Islamic State. By not highlighting these violations, we accept a double standard that should have no place in a liberal arts environment."

Anti-Israel Bias in Academia on Campus

The Mutation of Antisemitism
Would You Rather Be Right or Happy?
Korach’s Unique Punishment
Who Was Josephus? The Controversial Backstory of the Famed Historian
Comments
MOST POPULAR IN Israel
Our privacy policy