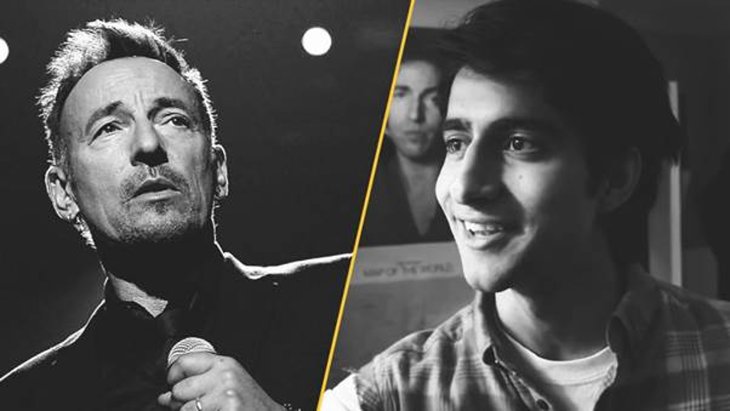 A new movie highlights how the rock legend inspired a teenager to pursue his dreams, reminding me of everything I love about Springsteen’s music.

When I was single, I once accepted a date with a man I knew I wasn’t really interested in. This was clearly not my finest moment, but many readers may offer absolution when I explain that he had tickets to a Bruce Springsteen concert. He was a music producer and in possession of very expensive, enviable seats, the likes of which I would never sit in again. I wrestled my conscience to the ground in about two seconds. No way would I miss this opportunity to see “the Boss” in concert for the first time.

Springsteen and his incomparable E Street Band played with electrifying abandon. Thousands of us danced and sang along with Bruce during “Born to Run,” “Thunder Road,” “The River” and other hits. I’ll never forget the thrill of that evening, and the high that lingered through the following days.

The themes of a lot of Springsteen songs were in many ways distant from my reality. I didn’t grow up in an economically struggling town. I didn’t know anyone who worked on the highway, blasting through the bedrock, and I really had no ambition to drive a pink Cadillac, or drag race on the streets. Some songs were laced with an undercurrent of anger or anxiety; others were about dreams delayed or even deflated. Yet the songs were also shot through with irrepressible youthful energy, eagerness for romance, and a no-holds-barred determination to fulfill one’s dreams wherever they took you, once you escaped the “darkness at the edge of town.”

Who among us didn’t have a “hungry heart” when we were young?

Almost all young people dream of transcending the limitations of their upbringing, and I was no different. I also had dreams of my own and was resolutely determined to achieve them. I also longed to find the comfort of lasting love. Who among us didn’t have a “hungry heart” when we were young? In this way, Springsteen’s songs and their universal appeal spoke to me as well.

In the decades since I attended that incredible concert, I’ve remained a big fan of that young artist who put Asbury Park, New Jersey on the map. I also became a huge fan of “the Big Man,” saxophone player Clarence Clemons, who was a member of the E Street Band from its inception in 1972 until his passing in 2011. Through an act of sheer chutzpah, I also once wrangled an interview with Clemons for a rather shady magazine, despite my having zero credentials writing about the music scene. This, too, was exciting, bringing me close to a source of much musical joy.

As a decades-long Bruce Springsteen fan, I rushed out to see “Blinded by the Light,” the delightful new movie directed by Gurinder Chadha (“Bend It Like Beckham”) about the impact of the artist’s music on a Pakistani-born British teen named Javed. The film is part coming-of-age story and part movie musical, featuring enough Springsteen music to satisfy the most diehard devotees.

Javed (Viveik Kalra) feels his life is increasingly constricted by outside forces, including economic hardship, stifling parental expectations, and rising prejudice against the Pakistani community. Javed’s father, Malik (Kulvinder Ghir), forbids him from going to parties, dismisses his son’s quest to become a writer, and pressures him academically so that he can join the professional class. (Malik is a factory worker until he loses his job due to the recession in the late 1980’s.) When dropping Javed at school one day, Malik shouts after him, “Look for the Jews in your class! Do what they do! They are successful!”

Javed’s gloom is transformed to euphoria when hears his first Springsteen song: “Hey I ain’t a boy, no I’m a man, and I believe in the promised land,” Javed hears in the song “The Promised Land.” His eyes widen as big as doorknobs and his face lights up. Reinvigorated, he retrieves his poems from the trash and becomes an instant Springsteen addict, finding both emotional release as well as confidence in the music. He picks up his pen again to write, encouraged in large measure by his English teacher, who tells him that he has a gift.

Malik is at first disturbed by his son’s fandom to an American rock star but is slightly assuaged because he thinks that the name “Springsteen” sounds Jewish. In a running joke in the film, Malik continues to ask his son if he’s sure that “the Boss" isn’t Jewish after all.

This feel-good movie is based on the experiences of journalist Sarfraz Manzoor, the real-life Javed, who co-wrote the film script based on his memoir, Greetings from Bury Park: Race. Religion. Rock'n'Roll. Manzoor’s obsession with Springsteen was no passing fancy. He has attended more than 150 concerts and met the artist several times.

Different forms of music speak differently to different generations. Many in my parents’ generation were shocked and disturbed by the emergence of rock ‘n roll, its hard and angry beats, and its unprecedented explicit lyrics. As an adult myself, I have been similarly appalled by the crudeness and sometimes, violent lyrics and beats of punk, hip-hop, metal and other styles popularized in recent decades.

I loved watching “Blinded by the Light.” Springsteen’s music spoke to me when I was a young adult; not just the words, but the music that thrilled and energized me (especially that saxophone!), lifted my mood, made me jump up and dance. The movie brought me back in time to when I was just old enough to begin to pursue my dreams. It also triggered wonderful memories of times when I have shared this favorite rock music with my husband, including one Springsteen concert we went to together -- before ticket prices shot stratospherically through the roof. I still listen to “Bruuuuce!” when I need the energy to keep pedaling on our elliptical bicycle, when I’m cooking, or just want to tap into that musical magic again.

Music is one of God’s greatest gifts to us, a formidable creative tool that can be used for ill or for good. It can trigger our lower, base instincts, or it can lift our souls as if with a divine kiss.

Of course, Jewish music also fills my soul. Who can ever get tired of hearing the triumphant sounds of “Od Yishama” at a wedding, of singing “Dayenu” during the Pesach seder, or of hearing “Eishet Chayil” on Shabbat? At shul, I am moved to tears each time the Torah is returned to the ark and we sing “Etz Chayim Hi,” together, as one community with one voice.

Those are sublime moments to be treasured. But I can’t live at that exalted spiritual level all the time. Sometimes, I just need to rock out a little with Bruce Springsteen and the E Street Band.

The Secret Chord: The Complex, Heroic Act of Forgiveness
Faith: the Axis Upon Which the Wheel of Science Turns
Love - Not Just About Chemicals Anymore!
Is There a Moral Code in a Virtual World?
Comments
MOST POPULAR IN Jewlarious
Our privacy policy