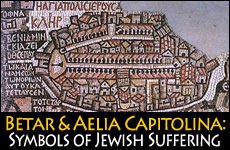 On Tisha b’Av we mourn not just a physical destruction and our broken spiritual connection, but also our psychological sufferings.

Of the five specific tragedies that warrant fasting on Tisha b’Av (Mishnah Taanit 4:6), two are related to the Second Jewish Revolt against Rome. The first is the capture of the city of Betar (135 CE) and the second is the plowing of Jerusalem one year later. At first glance, these calamities do not seem to be of the same scale as the destruction of the First and Second Temples. The Jews were neither forcibly removed en masse to a distant land nor was a standing Temple destroyed. Perhaps one could argue that their inclusion within the list was simply due to their still being fresh in people’s memories. Surely, the rabbis of the Mishnaic period would have encountered eyewitnesses to these events and been moved by their recollections. Yet, if this were so, then the Mishnah really need only include one reference to the rebellion. By including two, the Mishnah is teaching us something about the magnitude of this tragedy and the challenges that lay ahead for the Jewish people.

Related Article: When God Moved Out

If not for the Bar Kokhba rebellion, it is unlikely many people would be familiar with Betar. The ancient city (Khirbet el-Yahud – “ruin of the Jews”) was a modest settlement southwest of Jerusalem in the Judean Hills. Surveys and brief excavations have demonstrated that Betar was first settled during the period of the Shoftim (Judges) and became a city of moderate importance by the time of Hizkiyahu. (1) Settlement continued unabated through the Persian, Hellenistic, and Early Roman Periods. Ceramic and architectural remains, including some Herodian style ashlars, attest to the emergent prosperity of the site during Second Temple times. When the Second Jewish Revolt broke out, Bar Kokhba chose Betar as his headquarters for three main reasons: its proximity to Jerusalem and to the main road running from Jerusalem to Gaza, its abundant spring water, and its location atop a hill surrounded by deep valleys.

The Roman objective in attacking Betar was the annihilation of Bar Kokhba and his men.

In preparing their stronghold, the rebels established a fortification system that is still visible today. It consisted of a wall and perhaps a moat. The wall was constructed hastily and incorporated, where possible, segments of an earlier wall or buildings. Particular emphasis was given to strengthening the southern end of the settlement, as this was topographically the most vulnerable. The rebels raised the ground level here by adding an artificial fill comprised of earth and limestone chips. As a result, the southern edge became the highest point of the summit as well as the best fortified.

The Roman objective in attacking Betar was not really the city itself but rather the annihilation of Bar Kokhba and his men. The Romans decided to pursue a strategy of prolonged siege, which in its most elementary form can be carried out by simply surrounding a beleaguered settlement with soldiers. In this case, however, the Romans opted for a more efficient and effective method, which involved the construction of a siege wall. Evidence of this wall, built of fieldstones, is preserved along the western, northern, and part of the eastern side of the site. The wall encircled the city, thereby thwarting rebel efforts to escape, bring in fresh supplies, or gain access to their main water supply (i.e., the spring).

Not much is known archaeologically of the actual battle, except that the rebels did not run out of sling stones – a cache of them were found on top of the wall – and that the Roman soldiers stormed the city without a ramp. (2) Bar Kokhba, his army, and the city’s inhabitants were all killed, while the fortress itself was destroyed and abandoned.

The capture of Betar represented failure in the face of tremendous effort.

The destruction of Betar effectively brought an end to the rebellion and to the small measure of political independence that Bar Kokhba had achieved. While the physical consequences were severe, including forced migration out of Judea, slavery, and widespread extermination, the spiritual consequences were equally devastating. The period after Betar ushered in pervasive religious persecution and forced Jews to adjust to a long-term religious landscape, which included neither Jerusalem nor the Temple. Finally, and perhaps most critically, was the grave injury to the collective psyche, for the capture of Betar represented failure in the face of tremendous effort. A small nation had taken on the mighty Roman Empire, engaged in the greatest war of liberation the world had ever seen, and lost. Betar symbolized our failed attempt to help ourselves.

It may be hard to conceive, but Hadrian originally intended the rebuilding of Jerusalem – still in ruins from the Roman conquest in 70 CE – to be a gift to the Jewish people. Hadrian envisioned a typical Roman provincial capital, with the elevated status of a colony. However, the three years of rebellion left Hadrian furious with the Jews, and he resolved to punish them severely. Privileges that the Jews had enjoyed from the time of Julius Caesar were revoked, and new laws forbade Jews to live anywhere in the vicinity of Jerusalem.

Hadrian’s city, now called Aelia Capitolina, was divided into two distinct areas: a civilian section the north and a Roman encampment in the south (fig. 1). Even today, the layout of the Old City reveals a clear difference in the street plan between the northern and southern sectors. In the northern sector (today's Moslem and Christian Quarters), the streets generally intersect at perpendicular angles whereas in the southern part of the Old City (the Armenian and Jewish Quarters) streets intersect at odd angles. The reason for this distinction is that the southern area was haphazardly settled after the Roman Tenth Legion left Jerusalem at the end of the 3rd century CE.

The city was further divided into quarters by two principal roads: Cardo Maximus (north-south) and Decumanus (east-west). Cardo Maximus, lined with columns, extended from what is now the Damascus Gate in the north through the civilian section of the Roman city as far south as the northern border of the Roman Tenth Legion campsite (today's David Street). Beyond this, no remains of the Roman era Cardo were found (remains of the Cardo visible today south of David Street date to the Byzantine era).

The inhabitants of Aelia Capitolina enjoyed all the refinements of a Roman colony. There were columned streets, an open plaza, statues, market places, a theater, public baths, and temples. To enter the city, people passed through an arched gateway, which is partially intact and visible today below and to the left of modern Damascus Gate. In short, Jerusalem flourished as a pagan city after the Second Jewish Revolt.

The Jewish and sacred character of Jerusalem was obliterated.

It was precisely this flourishing that was so tragic. When the Mishnah states “nechreshah ha-ir” – “the city was ploughed under” (Taanit 4:6), it does not mean that after Bar Kokhba Jerusalem was rendered uninhabitable, but rather it was the Jewish and sacred character of Jerusalem that was obliterated. Jews were by decree forbidden to live in the city or even to visit it, except on Tishah b’Av. The central religious focus of the city became the Temple of Venus (Aphrodite) at the intersection of Cardo Maximus and Decumanus – (the same location of present-day Church of the Holy Sepulchre). What happened to the Temple Mount is not clear. Hadrian certainly intended to build a Temple there to Jupiter, yet eyewitnesses only mention two statues, one of Hadrian himself and one of his successor Antonius Pius. Like the tragedy of Betar, the physical and spiritual consequences were severe. But again it was the psychological ones that seemed most devastating. By rebuilding Jerusalem as a thriving provincial capital that was strictly pagan, the great political power of the time deliberately set out to mock the Jewish people.

We mourn, therefore, on Tisha b’Av not just a physical destruction and our broken spiritual connection, but also our psychological sufferings: that our best efforts to protect ourselves are sometimes not enough and that our enemies will seek out opportunities to mock and humiliate us.

This article originally appeared in http://www.yutorah.org/togo/tishabav

Dr. Jill Katz is a Professor of Archaeology and Anthropology at Yeshiva University

Healing the Brokenness Within: How to Tap into the Energy of Tisha B’Av
The Blue Beyond
Great Place to Live
Is Eating Supposed To Be Spiritual?
Comments
MOST POPULAR IN Tisha BAv
Our privacy policy