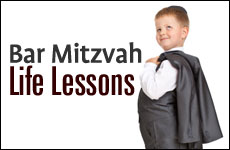 All I really need to know in life, I learned from my Bar Mitzvah.

Talk to ten different people (one at a time, please, so it’s not so confusing) and each one could offer a different response to the question, “Where did you learn everything you know about life?” Answers might include: school, father, mother, siblings, books, Dr. Phil, Oprah, movies, magazines, nature, pets, the Internet, the House of the Rising Sun, and so on. For me, though, my great life training was clearly my bar mitzvah.

For me, my great life training was clearly my bar mitzvah.

According to Jewish law, when Jewish children reach 13 years of age for boys and 12 years of age for girls, they become responsible for their actions, and "become a Bar or Bat Mitzvah." (English: Son (Bar) or Daughter (Bat) of the commandment). Note to self: Look into origin of “Batman.”

Why a year earlier for girls than for guys? They say it is because they mature faster but I myself was plenty mature at the age of 13. After all, I had mastered the art of wedging my homework in between snacking, watching TV and playing baseball outside with my friends. In my eyes, that was maturity. So, I wondered, just how much more could I possibly learn from having a bar mitzvah? And, more importantly, would the gifts end up making all the studying worthwhile? (Which, after all, is one of a Jewish boy’s most important questions.)

Prior to age 13, the child can do all sorts of wacky stuff—even claim he’s a rock star from Mars, with tiger blood and is constantly “duh, winning!” – because it’s not he, but the child's parents who hold the responsibility for the child's adherence to Jewish law and tradition. After this age, children bear their own responsibility for Jewish ritual law, tradition, and ethics and are privileged to participate in all areas of Jewish community life, even the All You Can Eat Blintz-athon. But I digress.

My life knowledge, derived directly from the experience of my bar mitzvah, can be summed up in the following:

Five Things I Learned About Life from My Bar Mitzvah

How to Celebrate Jerusalem Day This Year