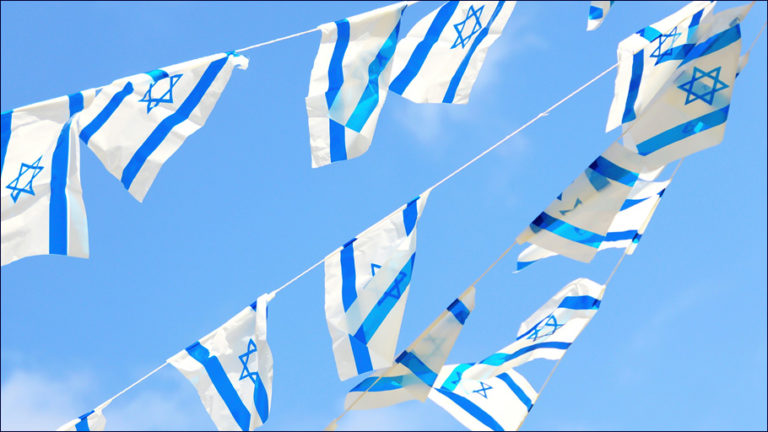 This Israel Independence Day, shpritz people with white foam. In Israel, that’s just what we do.

Yom HaAtzmaut, Israeli Independence Day, is a fairly new holiday. Seventy years ago, we came back to Israel as a Jewish nation and now we celebrate it. How? That is a question that has caused many arguments. Nonetheless, there are certain traditions that are ubiquitous for the celebration of Israel’s independence, and many we can add to make the holiday more enjoyable.

1,000 years from now, people are going to be talking about the Yom HaAtzmaut traditions we practice today. We are creating the traditions, this is our chance to make it meaningful.

Celebrate with a tiny BBQ known as a “Mangal”. Nothing says Israel like a grill that is difficult to use.

Jeans are very expensive in Israel, and thus classy. Class is defined by money, which is why I usually wear a suit. I don’t have enough money for jeans. Keep Yom HaAtzmaut with the appropriate respect for the day and wear show up to synagogue for the special prayers of the day with dyed jeans, a bedazzled shirt with no collar, and plastic shoes. Crocs are also expensive in Israel.

Take any white foam and spray people who will not appreciate it. Look for people in suits. They are not dressed for a holiday – the foam is hard to get out of their clothes. Making them not happy helps us all celebrate with more joy.

Shaving cream works well for the practice of this tradition, as seen by the Israeli children on the major streets of all cities. Due to the laws of not taking a razor to the corners of the face, this is a great use of shaving cream. Even better, use toothpaste. It’s harder to get that out of the clothing and hair.

Take a plastic bopper that looks like a hammer and bop people. This is a tradition practiced by Israeli children who cannot find somebody in a suit.

If you can’t find a foam spray or a bopper, just run up to people and touch their ears. The idea is that kids have off from school and we celebrate by allowing them to bother adults.

All Israelis living in Israel do this on Yom HaAtzmaut. Hence, it is now a tradition.

If you want to make your walk feel more Israeli, do what they have done on every hike I have been on with a group in Israel. Carry a 5-gallon bottle of water with you. Known as a jerrycan, this will make your hike heavier and harder to finish. Also, make sure to have a bus waiting for you at the end of the hike, to drive you back to where you started the hike from.

Israeli kids walk the streets waving flags. That’s the tradition. We don’t celebrate with floats. There is already enough traffic in Israel.

Hang an Israeli Flag from Your Car

Tradition is to hang the flag from the car and keep it there until you start driving and realize the window is open. By the end of the day, it mustn’t be there.

Travel to the Old Area of Your City

Israel is ancient, and thus we must connect with old stuff. If you’re not in Israel and can’t find a walled city, this requirement may also be fulfilled by traveling to any area where there is a Kmart.

Make sure your BBQ is tiny. Known in Israel as the “Mangal”, it should be no bigger than a matchbox. Israeli Independence Day is celebrated with a grill that is not easy to use. With that in mind, it is forbidden to use a gas grill.

Why not bring the Chanukah feeling to your Yom HaAtzmaut. Burn eight Mangals and celebrate the miracle of having enough room on the grill to feed the whole family.

Bring a Portable Speaker to Your BBQ

This will allow you to connect with the Israeli tradition of playing the music you like very loudly, even though you don’t know the other people at the park.

Make sure you play the music they play on Israeli radio stations, like Adele.

Leave the Garbage Out

Make sure that you don’t clean up the garbage that was left from your Mangal. It is not celebratory to clean.

This is a tradition I created. On this one day, Americans have to try. They must put a little effort into acclimating; either by trying to speak Hebrew or by using an Israeli accent to speak English. If neither of those work, they must try to sound French. Anything to show they are trying to fit in.

Play soccer on a basketball court. Make Israeli coffee that doesn’t dissolve, so that when you finish drinking your coffee there is more coffee in there then when you started drinking it. Pretend like you are part of the Knesset and argue with people. Eat falafel or anything that doesn’t require utensils like burritos. Dance in a circle and then move back and forth in one spot. Give the Jewish National Fund money to plant a tree for you in Israel that you will never see.

Some of these traditions may change over the years. Arguments may occur over the required amount of coals for the Mangal and how many BBQs you should light. Some rabbis may ban spraying people with white foam. Flags may be required to be taped to the windows so that they don’t fly away. I don’t know how traditions will change. One thing I know that never will change is kids are off from school and they will make life difficult for the rest of us.

WouldJew Believe #7
Extras In Our Own Epic
Evolution 2.0: The Coming Darwinian Revolution
Chukat 5782: Let’s Play the Blame Game!
Comments
MOST POPULAR IN Jewlarious
Our privacy policy