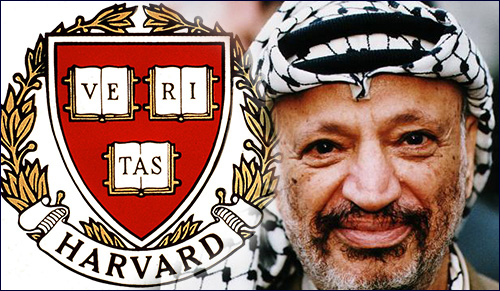 Harvard Hillel and the Jewish Philanthropies pay for a student pilgrimage to the arch-terrorist’s burial shrine.

Having worked on campus in Boston for the past decade, I learned one key rule for instilling Jewish pride and connection for college students: Be open to a diversity of opinions, and always try to understand the other side.

To this end, when Aish takes groups of Hasbara Fellowships students to Israel, we allow representatives of the Palestinian viewpoint to state their case fairly and freely.

But there are limits.

A recent group of Harvard students went on the Harvard College Israel Trek 2014 to "learn about Israeli history, culture, and politics."

The trip included a solemn visit to the grave of Yasser Arafat in Ramallah. 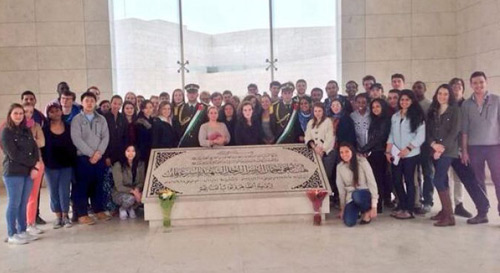 Arafat personally ordered the murder of hundreds of Israelis, including many Americans.

Arafat, for those may have forgotten, was an arch-terrorist who over decades personally ordered the murder of hundreds of Israelis, including many Americans.

So who sponsored this Harvard Trek to Arafat's grave?

According to the Trek website, "Israel Trek is made possible by the generous contributions of a number of family foundations and Boston’s Combined Jewish Philanthropies. The Trek is supported by Harvard Hillel."

How appalling to accord "honor" to Arafat through funding by Boston’s Jewish community!

As someone who lived in Israel from 2000-2005 and witnessed firsthand the destruction of lives, buses, cafes and property, I cannot stand for this revisionist history being indoctrinated into Harvard students, the future leaders of our society.

I personally heard the explosion when an Arafat-dispatched suicide bomber murdered 11 people in a café in the heart of Jerusalem, wounding many others. I was on a bus when Arafat’s henchmen hurled a boulder through the windshield in an attempt to kill us all. I have family and friends who witnessed unspeakable horrors. Just about everyone living in Israel knows someone deeply and directly affected by Arafat’s murderous intent.

If the point was to prove “nuance,” then trips to the graves of Arafat’s victims would be more appropriate, so they don’t become relegated to simply statistics and anonymity. Even more so, visiting those "merely maimed" by Arafat's thugs would have been a far better use of educational time and resources.

Imagine the guide’s talk at the grave: "Here lies Arafat..." then what? Revolutionary? Pioneer? Freedom fighter?

Arafat should go down on history’s list of infamy, not famed by a group of college students from any university, let alone the prestigious Harvard.

As someone who works tirelessly to educate students on the relevant issues of the situation in Israel, with all the complexities and viewpoints taken into account and shared openly, this is a stunning setback.

By contrast, our Hasbara New England initiative has been incredibly effective in teaching students to stand proud for Israel on campus. In fact, most pro-Israel leadership on campus have completed our training program. They are enthused, confident, and capable of leading the call to support Israel – effectively using social media, building strategic relationships with student groups, and advocating through peer-to-peer programming that engages students.

Seeing our community donors supporting a project that puts Arafat on a pedestal is an affront to Arafat’s victims. It is an affront to the Jewish people. How my beloved Jewish community in Boston could end up helping to pay for this is beyond belief.

Click here to read a response from the organizers of the trip, and let us know what you think in the comment section below.

Rabbi Chananel Weiner is the CEO of Aish Campus Boston. Chananel graduated from the University of Maryland with a degree in English and History. Before starting law school, Chananel spent the summer in Israel and changed his life direction – instead spending the next six years studying at Aish Jerusalem. Chananel lives in Boston with his wife Michelle (originally from London) and two children. Chananel is known for his outgoing personality, encouraging people to ask and get their questions answered. He recently participated in a discussion at Harvard’s ILR School dedicated to finding a solution to the Middle East conflict. Check out Rabbi Chananel (undercover) at http://www.youtube.com/user/UnofficialUTubeRabbi

Becoming a Student Advocate for Israel
What Makes Eli Run?
The Tyranny of Materialism
Science Enters the Mysterious Inner World of Consciousness
Comments
MOST POPULAR IN Israel
Our privacy policy