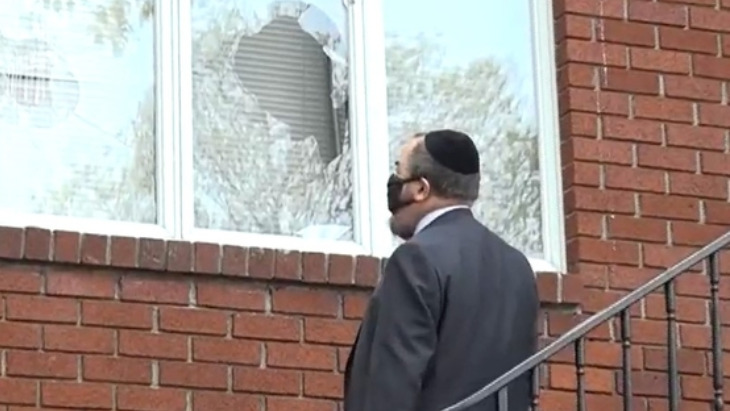 When Jews are attacked in America's streets, who speaks out?

For the last few years, in the wake of the 2018 Tree of Life massacre in Pittsburgh, the doors to my Brookline synagogue have been kept locked. Anyone arriving for Sabbath morning services has been allowed to enter only after being approved by the security guard hired to ensure we can pray in safety. But last Saturday, there was an extra layer of protection. A police cruiser was parked directly in front: a warning to anyone who might show up to threaten or commit violence.

Fortunately there was no antisemitic mayhem in my neighborhood. Jews in other American neighborhoods have not been so lucky. In Brooklyn, N.Y., three men drove to an Orthodox synagogue, yelling "F*** the Jews" and "Free Palestine," then began banging on the locked doors as services were getting underway. Forty-five minutes later, police said, the same assailants attacked two Jewish teenagers, punching them and threatening them with a baseball bat.

Earlier in the week, a group of men waving Palestinian flags attacked diners outside a sushi restaurant in a Jewish section of Los Angeles. Someone screaming "Jews should die!" dumped a bag of excrement in front of a synagogue in Hallandale Beach, Fla. Major League Soccer player Luca Lewis reported being threatened by at least six knife-wielding Arab men who demanded to know if he was Jewish. A large rock was hurled through the glass door of Congregation Chaverim in Tucson, whose members include former congresswoman (and assassination attempt survivor) Gabby Giffords. In a heavily Jewish neighborhood near Manhattan's Times Square, men wearing Palestinian scarves flung lit fireworks at pedestrians and severely beat Joseph Borgen, a yarmulke-wearing 29-year-old who was on his way to a pro-Israel rally.

Those were just some of the dozens of antisemitic attacks on Jews and Jewish facilities that have been reported across the country this month. There has also been an explosion of raw anti-Jewish bigotry on social media. "Extreme antisemitic and anti-Zionist content can be found across a wide variety of channels calling for the destruction of the Jewish state," reported the Center on Extremism at the Anti-Defamation League. To mention just one example, the center tallied more than 17,000 Twitter users tweeting the phrase "Hitler was right" between May 7 and May 14.

America is not an antisemitic nation – quite the contrary – but antisemitism in America is indisputably growing worse.

Jews constitute just 2 percent of the US population, but they are the victims in more than 60 percent of religion-based hate crimes, according to the FBI's annual Hate Crimes Statistics report. Some of that hatred comes from extremists on the far right, like the neo-Nazis who in 2017 marched in Charlottesville, Va., chanting "Jews will not replace us," or like the 2019 synagogue shooting in Poway, Calif., when a white supremacist opened fire during Passover, killing a 60-year-old woman and wounding three other worshipers.

Such eruptions of right-wing antisemitism draw wide media coverage and vehement, unstinting condemnation across the board – as they should. So do incendiary comments from hard-right politicians, such as Representative Marjorie Taylor Greene's recent despicable comparison of Covid-related mask mandates to Nazi repression in the Holocaust, which congressional Republican leaders denounced Tuesday as "appalling," "reprehensible," and "loony."

But when Jew-hatred comes from the left, or is incited by unhinged progressive diatribes against the Jewish state, such social-justice allyship dries up. Media, political, and corporate voices that have been so passionate and voluble in castigating systemic racism, anti-Asian brutality, and the mistreatment of Black and brown communities have had little or nothing to say as the snakes of Jew-hatred slither out from under anti-Israel boulders.

Why? Are they unwilling to say anything that might call attention to the truth that hatred of Israel is all too often indistinguishable from hatred of Jews? Are they wary of undermining the comfortable left-wing myth that antisemitism is a right-wing sickness?

Antisemitism is and always has been an every-wing sickness. It appeals to unhinged political fanatics across the spectrum – from the alt-right trolls who found Donald Trump so fascinating to the anti-Zionist zealots whose loathing for Israel extends to anyone who doesn't share that loathing.

In a Monday tweet, President Biden unequivocally decried the recent spate of antisemitic assaults. But it will take more than one presidential tweet to change what is happening in America. For nearly three centuries, America has been for the Jews a safe harbor without parallel in history. But as every Jew knows, that can change. And when Jewish diners are beaten in the streets and even locked and guarded synagogues need police protection, it is hard not to wonder if that change is already irrevocable.

When a Loved One Has Depression