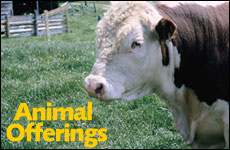 Understanding their relevance to the 21st century.

The Book of Leviticus presents a lengthy, detailed description of animal offerings in the Holy Temple -- burning of limbs, sprinkling of blood, flaying of flesh. Modern man may at first find this notion pagan and primitive. It sure sounds quite different from the warm spirituality we imagine our ancestors practicing!

The question becomes increasingly difficult as one considers Judaism's position on care and concern toward animals. Beyond the general biblical prohibition against causing pain to animals ("Tzar Baalei Chaim"), there is a whole list of mitzvot designed for the protection of animals, including: to unload a donkey whose load is too heavy, to give your animal a day off of work on Shabbat, not to muzzle an animal when working in the field (i.e. don't prevent it from eating what it sees), and many others. In fact, according to the Code of Jewish law, it is even forbidden for to sit down to dinner before feeding your pet.

So why animal offerings? Let’s address some basic misconceptions.

Misconception #1: Isn't it cruel to kill an animal?

Why should this bother us? Modern man will kill cows to satisfy a need for burgers and shoes. So if using animals is justified for physical benefit, then all the more so for spiritual benefit!

(For the record, all offerings had a practical, physical benefit as well. The vast majority were eaten -- e.g. the Passover offering was roasted and eaten at every Seder table. Even with offerings that were burned, the animal’s leather was used by the kohanim.)

Misconception #2: These offerings are a "sacrifice."

The Hebrew word korbon, which the Torah uses to describe animal offerings, does not mean “sacrifice,” as in giving something up. Nor does it mean an “offering,” as in bringing a gift to the gods. Rather, korbon means "to come near." The purpose of a korbon is to help a person get closer to God.

In the Temple, we take the animal parts and elevate them onto the altar. This is a personal declaration of intent to elevate our material resources to a higher level -- to direct it toward the service of God.

Which leads us to Misconception #3: We think, "What kind of god needs offerings from us? Is this some kind of bribe so he won’t be angry with us?"

We have to differentiate between Greek mythology and Judaism. The pagan sacrifices were to appease finite gods who had control over a limited aspect of existence. Every god needed something else and humans could avoid the wrath of the gods by giving them what they needed.

Offerings are not for God.

Jewish offerings are not for God. He doesn’t need it. God is all-powerful and has everything already. Rather, the offerings are for us. They teach us to take the physical -- the body -- and sanctify it.

One of the 613 mitzvot is that the Kohen Gadol (High Priest) must keep the Ephod (breastplate) constantly attached. Rabbi Shimshon Rafael Hirsch points out that in idolatry, the ceremonial breastplate was typically tied onto the idol. The philosophy was to control the idol and "get it on your side." But in Judaism, the Kohen Gadol ties the breastplate to himself -- because it is ourselves that we want to control.

Every human being is comprised of two components – the physical body and the spiritual soul. Each part wants to be nourished and sustained, yet each achieves this in a very different way. The body seeks comfort and immediate gratification: food, sleep, power, wealth. The soul seeks longer-lasting, eternal pleasures: meaning, love, good deeds, connection to God.

The mitzvot of the Torah are designed to guide us toward "soul pleasures." However, when the body exerts dominance, the consequence is a transgression of these mitzvot.

The way to repair that mistake is to bring an offering. The transgressor steps forward and declares: "I have made a mistake and regret the damage it caused my soul. My animal side got the best of me. I don’t want to repeat that mistake again. I hereby pledge to slaughter animalism as the dominant force in my life."

Why the Blood and Guts?

When a person sees the animal slaughtered before his eyes, he thinks, "Really I deserve this. But God is merciful and sparing." That's a powerful spiritual experience. Blood is real. It shakes a person. You see the heaviness of life.

Kirk Douglas, the legendary film star, was involved in a serious helicopter crash in 1991. The pilot and co-pilot were killed, but Kirk got out alive.

The crash shook him physically and spiritually.

The event shook him as much spiritually as it did physically. Lying in the hospital bed, he asked himself over and over again: Why was I the one who survived?

Kirk eventually reached the conclusion: I survived because there is something important I have yet to accomplish in this world, a crucial contribution to make. Up until now I have been playing games. Now I see that life is more serious.

Kirk embarked on a program of regular Torah study and began to re-institute the Jewish traditions he'd remembered from his youth as the son of a ragman and when he was known by the name Izzy Demsky. Kirk began a search for ways to utilize his material wealth to impact the world. It was a transformation back to himself -- despite the pressures of secular Hollywood fighting against him.

Today, he's more committed than ever. He undertook responsibility for building a multi-media theater at the new Aish HaTorah Center across from the Western Wall – as a way to provide tourists with an authentic, inspiring Jewish experience. Kirk is driven to make up for lost time.

Just as in the Temple... the scene of blood, the proximity to death... thinking "this could have been me." It changes one's life forever.

Today, without the Temple service, learning about these ideas can inspire us to change, too.

A Home for the Soul

Theodor Herzl: The Zionist Dream of a Jewish State

Ancient Coins Tell the Story of the Jewish People
In the Shadow of David and Goliath
Where Do the Laws of Nature Come From?
Saadiah Gaon, Rashi and Maimonides: How Three Rabbis Revolutionized Judaism
Comments