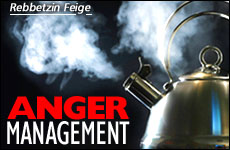 The loudest sound in the universe is the breaking of a bad habit.

I am a devoted reader of your columns and have learned much from your sage and compassionate counsel.

For some time now, with limited success, I have been working on becoming more even-tempered. I believe that a more structured course of study might be helpful and would appreciate your advice on this matter.

Rabbi Dessler teaches that the human being is comprised of two manifestations of the "I." One is the essential "I," the Godly image within each and every one of us. This is referred to as the soul, the higher part of ourselves.

The other "I" is what we popularly call the ego, what Freud referred to as ‘id.' In a sense, it is the counterfeit "I, the lesser part of us that masquerades as an advocate on our behalf, but can in fact take us far afield into muddy waters.

Hillel, the great sage of the Mishnah, refers to the essential "I" in the following two comments: "If I am not for myself, who will be for me?" and "If I am here, everything is here!" Both comments suggest that it is the individual exclusively who must give life and definition to one's loftier, Godly self. Unquestionably, this is achieved by the choices one makes. "If my better self is here" -- in charge, in control, driving my behavior, then "everything is here." If I am not for myself (my essential self) -- giving expression to the purpose of my existence, who will do it?

Anger is a reaction of the ego to a perceived affront, a sense of diminution of its power.

The ego, the lesser self, is prideful, territorial, arrogant and totally absorbed in its desires and wants. Anger is a reaction of the ego to a perceived affront, a sense of diminution of its power. Frequent anger attacks or outbursts should be warning signals to the individual that the lesser part of themselves has taken up too much space and dominion over their person.

Self-righteous rationalizations aside, anger is seldom, with very few exceptions, viewed favorably in Jewish sources. Only the pretense, the feigning of anger, as when one is registering disapproval of children's behavior, is a show of anger deemed appropriate. But the requirement in those situations is that the person, not the anger, is driving the carefully thought-out response. If the anger is driving the person, it will not be emanating from a healthy place and will escalate out of control. Conversely, if the better part of the person is running the show, the anger will be a measured and constructive response.

Rabbi Yitzchak of Vurka, a leader of Polish Jewry about 200 years ago, used to robe himself in a special cloak before presenting himself in an angry mode. For him it was a disciplined act that had none of the impulsivity that renders anger so destructive. Indiscriminate anger is a negative emotion. It distorts personality and upsets mental equilibrium. The Talmud teaches: "When a person gives in to anger, if he is wise, his wisdom leaves him. If he is a prophet, his power of prophecy leaves him; if greatness was decreed for him from Heaven, anger will cause him to be degraded."

Even Moses, the most exalted of human beings, found himself spiritually compromised on the very rare occasions that he succumbed (however justifiably) to anger. "When any man gives way to rage, even the Divine Presence abandons him" (Talmud, Nedarim). Anger has been likened by the Talmud to idolatry, heresy, to serving other gods. Clearly, the message is that when one is in the grips of anger, it is not God, the proprietor of his better self that he is serving. It is his ego that holds him hostage and is dictating the terms of his behavior. The Talmud sums it up with the succinct statement: "Whoever is enraged, all kinds of demons have power over him."

King Solomon, the wisest of all men, cautions us about the mind, body and emotion connection: "Remove anger from your heart (thus) remove pain from your body" (Ecclesiastes), underscoring the fact that the object of the anger is not the only victim who suffers. The bearer of anger is ultimately the greatest loser on every score --spiritually, emotionally and physically.

Secondly, the Mishnah's teaching is that a proneness to anger is not an inborn or hopeless trait of character. Our sages teach that while such a temperament might be "something in a man's nature that he is prone to follow; but with a discipline of wisdom, he can gradually free himself from it until his heart changes completely into something new."

Rabbi Israel Salanter, the founder of the Mussar movement (self-growth initiative), often commented that the loudest sound in the universe was the breaking of a bad habit, the pattern of one's character trait, and moving on in a positive direction.

I would propose the following tools for consideration:

All of our behaviors and expressions of emotions are preceded by thought. Our take on any given situation we confront begins with the way we perceive it. There is no objective reality at play. Witness the fact that one day a given situation undoes us, and the very same set of circumstances doesn't phase us at another time. We are the interpreters. We are the thinkers.

Awareness of this fact should allow us to step back when we have one of the negative thought attacking that sparks anger and ask ourselves if this is the bus we want to take. We have the wherewithal, if we so choose, to drop the contaminating thought and move on, thereby making room for the clear-thinking of our innate wisdom, the better part of ourselves.

A second component of this approach is that generally speaking, when we feel affronted or take offense, it is about "me." I feel targeted, hence my ego is bruised, and the anger is a defense of my ego. In reality, the affront that seems to be personal is rarely about us. The inappropriate behavior of the other which triggers our hurt and subsequent anger generally comes from a place of insecurity in the person who is provoking us. If we are able to recognize this truth, we will find a port in the storm.

Say to yourself over and over again, "This is not about me."

We need to say to ourselves, over and over again, "This is not about me." This is about the insecure place where the combative individual finds himself. Consequently, instead of bringing anger to the scene, we will be able to generate compassion. And in the long run, our psychological well-being will be the greatest beneficiary.

Consider Debbie. She called to tell me that she was at her wit's end. Her son and his very-pregnant wife had moved in with her for the duration of the remodeling of their home. Instead of appreciation and gratitude, all she received from the young woman were outbursts, complaints, and expressions of dissatisfaction. She never knew what to expect, what was coming the next moment. She felt personally attacked and disrespected by the constant barrage of criticism.

Not being a wallflower herself, Debbie responded in self-righteous indignation and the house became a war zone. After we spoke, Debbie got it. She understood that this was not personal. Her daughter-in-law was in an insecure place -- disoriented, dislocated, pregnant for the first time, hormones raging, and to add insult to injury, at the mercy of the good graces of (good God!) her mother-in-law.

I met Debbie a few weeks later and she told me that peace was restored and harmony reigned once again in the home. All because she invoked the phrase that literally became her mantra: "This is not about me."

In human interactions, taking ourselves out of the picture, divesting ourselves of the contaminant of ego and its associated personal thought is empowering. Not only does it allow us to get a handle on angry and damaging responses, it also allows us to do real listening and get what the other person is really about.

Dear reader, you undoubtedly have experienced the fallout of fury, anger and rage. Anger is like a blast of frigid air that withers everything in its path. As you know, an angry person loses his understanding of the simplest things. Rage and hate eat into one's very bones until one's life becomes an abomination and one grows to hate him/herself. In a fit of anger one speaks words that he regrets forever -- family and friends eschew his presence; they fear him. Moreover, he finds himself in a constant state of having to apologize for his folly.

I am confident, dear reader, given your inquiry and your genuine desire to grow and tap into your innate wisdom and resilience, that with time and ever-increasing mastery, your journey will become more and more rewarding. Remember to give yourself credit for your gains. Oftentimes people are more ready to assume responsibility for their flaws than to give themselves credit for their successes. Awareness of success will give you impetus for more successful behavior. Good luck!

P.S. There are many good books on anger management of which you might avail yourself, i.e. "Anger: The Inner Teacher" by Rabbi Zelig Pliskin , "The Dance of Anger," by Harriet Lerner, and "Slowing Down to the Speed of Life" by Richard Carlson. Certainly classes, tapes and CDs on this topic and general Jewish subjects provide the fertile ground for growth.

Why are Tears Salty?

Pregnancy and Loss
Vayelech 5783: Regret and Repent
Rabbi Sacks: Focus On the Important, Not the Urgent
Put Your Foot Down: Are Human Feet Poorly Designed?
Comments
MOST POPULAR IN Family
Our privacy policy
Aish.com Is Looking for Great Writers