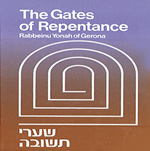 Yahrtzeit of Rabbeinu Yona of Gerona (1180-1263). Rabbeinu Yona was an outspoken critic of Maimonides' writings, particularly "Guide for the Perplexed." The governmental authorities later used this as a pretext to burn piles of Maimonides' books and copies of the Talmud. Rabbeinu Yona took this tragedy as a sign of heavenly rebuke against him; as a way to repair the damage, he undertook to write his famous work Shaarei Teshuva (Gates of Repentance), a Jewish system of introspection and self-improvement.