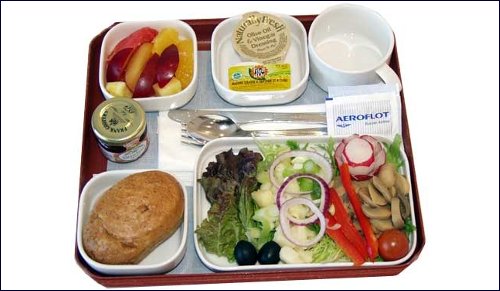 A small reminder of the miraculous nature of existence of the Jewish people.

Our oldest son is flying from Israel to the U.S. for Passover on Aeroflot, the Russian airline, so I called them to order him kosher meals. The Russian-accented agent was very polite and told me it was completely taken care of – our son would have kosher meals from Tel Aviv to Moscow and from Moscow to New York. She even thanked me for calling.

After I hung up, the magnitude of what I just experienced struck me. I grew up in Cleveland during the Cold War, with yellow and black labelled fallout shelters in schools. The biggest and longest running American news story, for decades straight, was the threat of war with Russia.

While Jewish Americans were merely threatened from afar, millions of our Jewish brethren trapped in the Soviet Union were suffering directly, outlawed from keeping kosher or performing any other mitzvot.

And now here I am, not many years later, being promised kosher food by the official Russian airline (which also sells the best priced tickets to Israel).

I shared a similar thought with my father-in-law once. He is a child Holocaust survivor from Hungary who was inspired to become a professor of psychology in the U.S., studying the phenomenon of obedience to evil authorities (pioneered by Stanley Milgram). About ten years ago, my father-in-law was invited by the Russian government to speak on this subject at an academic conference in Moscow. Since the conference had a Jewish focus, the Russians provided him with two armed agents for security during his visit.

When he returned, I said to him, “After the Holocaust, you and your remaining family had to escape a newly communist Hungary by foot, sneaking across the border to the DP camps in Austria. Your main threat was being discovered by armed Russian agents who would have shown you no mercy. Now, 60 years later, you are being protected by armed Russian agents, and if anyone were to even hint at threatening you, these agents would defend you and show your antagonist no mercy.”

The Haggadah tells us: “Not only one nation rose up to destroy us, but in every generation they rise up to destroy us, and the Holy One Blessed Be He saves us from their hands.” I’ve had no trouble presenting this idea to students with a limited Torah background because they have witnessed the truth of this startling insight. World history has faithfully clung to its undeniable description of reality.

However the end of this axiom has come under challenge in recent times: “...but the Holy One Blessed Be He saves us from their hands.” God doesn’t get too much credit from us these days. But no one has yet to offer any other reasonable explanation for the most unusual and longest running exception to every rule of history: the survival, and even flourishing, of a tiny minority people, still spread across the four corners of the globe, still demanding front page attention from the eyes of the world wherever they are found.

That’s us, the Jewish people.

My family is blessed this year that both that son and my father-in-law will sit with us at our Passover Seder – grandson and grandfather – along with many other loved ones. We will remember and give thanks for how God has removed so many of our enemies throughout history, transforming our conditions, in every generation, in ways that even hindsight cannot fathom.

And we will pray to see God’s salvation again soon, in our current generation, from all our daunting challenges, from inside and out, dreaming of a shana ha'ba'ah b'Yerushalayim, next year in Jerusalem.

Rabbi Shlomo Shulman was born in Cleveland, OH and grew up attending public schools and Reform Temple there. As a young Cleveland sports fan, he learned what it means to be part of an oppressed people. Shlomo and his wife, Aviva, run the Maimonides Society at Yale: an educational program dedicated to helping Jewish college students, who don’t think they learned it all in Sunday School, explore their eternal heritage on a deeper level through one on one text study, campus seminars, and amazing trips. Shlomo and Aviva are blessed with eight wonderful, well-behaved-at-heart children. They have also been foster parents to several children and young adults over the years.

Documentation of Atrocities: The Jewish Photographer Henryk Ross
Scientific Curiosity and the Divine Encounter
Mind Over Milkshakes
Love the Convert
Comments
MOST POPULAR IN Israel
Our privacy policy
Aish.com Is Looking for Great Writers