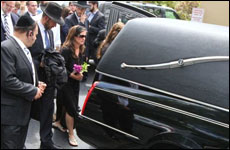 How do you say goodbye to your 12-year-old daughter?

As a parent there is one fear that is so terrifying we don’t even allow ourselves to think about it for more than a second: What would we do if we lost our child? How could we possibly cope and continue living? The instant the thought crosses our mind we quickly clench our eyes and shake the thought out of our head. 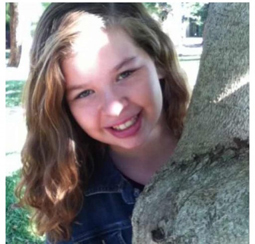 Two days ago in Florida, Shoshi Stern a"h, 12-year-old beloved daughter of Rabbi Mike and Denise Stern, was struck by a car while skateboarding. It’s with an incredibly sad and heavy heart that I write that she died from her injuries. Mike Stern has been one of my closest friends for well over 20 years. He and Denise have literally had thousands of people in their home for Shabbat and anyone who knows them can testify to the fact that they give continuously to anyone and everyone who crosses the threshold of their doorway.

When the email came that Shoshi was killed I had the urge to delete it, to make it go away so it wouldn’t be true. It was a terrible feeling, one I can only characterize as dread. Please, please, make this not true. I knew that it was. I bought the ticket, went through the motions of the day, and got on the plane to Boca Raton, all the while wishing that this wasn’t actually happening. For Mike and Denise, every parent’s worst fear had been realized. NO!!

Then I arrived at the funeral.

I’ll never forget seeing Mike, Denise, and Shoshi’s siblings walk into the synagogue. There was great pain -- but the love, closeness, and strength they had was palpable and brought a sense of calm to us all. This was the worst moment of their lives, yet they were holding each other close and crying softly.

Shoshi’s two brothers, Moshe 18, and Yossi 17, rose to speak, and shared words of Torah, love and appreciation of their sister with incredible faith and composure.

Then Mike stood up to say goodbye to his daughter. The moment he began speaking I understood that faith is something far beyond what I thought. There is no way that Mike could have spoken with such love, gratitude and perspective at his 12-year-old daughter’s funeral without a level of understanding that comes from something infinitely beyond the intellect. He spoke from his heart and from his soul. His words lifted us out of our smallness and reconnected us to a sense of God and why we are on this earth.

Mike shared how he was grateful, truly grateful that they had the privilege of having the gift of Shoshi for 12 years.

Every word he said cut straight through us. “Please, support each other, support your rabbis, your community, your synagogues.” There was not one word about his personal needs or pain, only words asking for us to give to each other. Mike spoke to each of his children and to his wife, saying how proud he was of them. He showed us in the most obvious way what a parent is supposed to be.

Through Mike's words and actions, God was sanctified yesterday in that synagogue, a huge Kiddush Hashem.

There are many things about the funeral and burial that will stay with me the rest of my life, and I don’t think I’m alone. I learned later that at the hospital, Denise implored the police officer to tell the driver of the vehicle that killed Shoshi not to blame himself. She told the officer to tell him they were a family of faith and knew that this was ultimately something from beyond him.

At the grave, Denise covered Shoshi’s grave with such love. She told me later it was the last thing she would ever be able to do for her daughter, and she wanted it to be perfect for her.

Shoshi’s death and funeral is sad beyond words, but I’m not coming home the same person as when I left yesterday. I got a new perspective of what faith actually means.

You can contribute to her memorial fund at www.shoshiestern.com

You can send your condolences to the Stern family using the comment section below.

How to Respond to Antisemitism
Don’t Believe in Other Gods Versus God is One
Seeing Without Eyes
Why Shouldn’t We Eat Whatever We Want?
Comments
MOST POPULAR IN Israel
Our privacy policy
Aish.com Is Looking for Great Writers