All About Tashlich on Rosh Hashanah 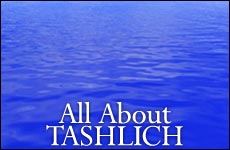 Cast your baggage into the river.

The "Tashlich" prayer is said on the first afternoon of Rosh Hashana by a pool of water.

1) What is the reason for this custom?

When Abraham went to take his son Isaac to the Akeida, the Satan appeared in the form of a river in order to prevent the performance of the mitzvah. Abraham entered the river undeterred and when the waters reached his neck, he cried out, "Save me, God, for the waters have reached my soul” (Psalms 69:2), whereupon the Satan disappeared. The recital of Tashlich by the riverside is intended to evoke the merit of the Akeida.

In the olden days it was customary to crown a new king by the river as a symbol that his kingship should continue like the river. On Rosh Hashana we proclaim God to be the King and Ruler of the world.

The verse says, "And they drew water and poured it before God (1-Samuel 7:6) and the commentators translate this as, "And they poured out their hearts in repentance like water before God." Rashi comments that this was a sign of submission as if to say, "We are like this poured out water before You."

2) Why is it preferable to do Tashlich by a river that has fish?

a. Since fish have no eyelids, their eyes are constantly open. This symbolizes God's constant protective watch over the Jewish people.

b. Just as fish are suddenly caught in nets, so too we are caught in the net of judgment for life or death. Such thoughts should arouse a person to repentance.

c. This symbolizes our hope to be fruitful and multiply like fish.

d. In order that the evil eye shall not affect us, just as it cannot affect the fish that are hidden under the water.

Tashlich may still be said there.

4) Is one permitted to throw breadcrumbs to the fish?

No, it is forbidden to feed the fish on Yom Tov.

5) What if the closest river is far from one's home?

If the river can be seen in the distance Tashlich may be said.

6) What if there is no river at all in the vicinity?

One may go to any natural body of water e.g. a spring, well, lake, or pond. Some have the custom to say Tashlich by a mikveh.

7) What if one cannot find a natural body of water?

He may say it by any collection of water, e.g. aquarium or container of water.

8) What is the best time to say Tashlich?

After Mincha on the first day of Rosh Hashana.

9) Is Tashlich said when Rosh Hashana is on Shabbat?

Some have the custom to say Tashlich even on Shabbat. Most communities postpone saying it until the second day of Rosh Hashana in order to prevent people from carrying their machzor in a place that has no eiruv.

Yes, in fact Tashlich can be said on any day until Yom Kippur. Some opinions permit its recital until Shemini Atzeret.

Who is like You, God, who removes iniquity and overlooks transgression of the remainder of His inheritance. He doesn't remain angry forever because He desires kindness. He will return and He will be merciful to us, and He will conquer our iniquities, and He will cast them into the depths of the seas.

Give truth to Jacob, kindness to Abraham like that you swore to our ancestors from long ago.

The Fast of Gedalia

Laws of the Festive Meals

Understanding the High Holidays
It Takes A Lot Of Faith To Be An Atheist
How Instagram Brought Back This Nostalgic Soup
What Makes Eli Run?
Comments
MOST POPULAR IN Rosh Hashanah
Our privacy policy