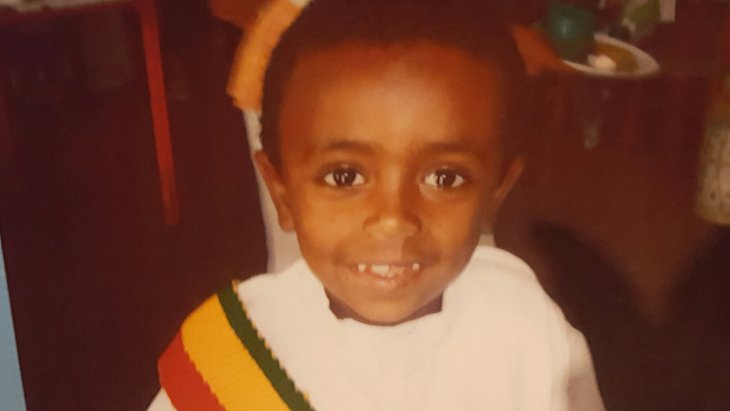 Adopting Abi was the most challenging thing we've ever done, but at the same time the most significant, life-enhancing and rewarding.

Although we had been blessed with four children, my husband Jay and I always felt as though our family was not quite finished. After several disappointing miscarriages, we seriously considered fostering or adopting a child, but nothing ever worked out. All too soon it seemed our kids had grown and flown away, to school or jobs, throughout the country. But Jay and I didn't feel ready for an empty nest yet. We found the sudden silence of our empty home oppressive, missing the vibrancy, noise, laughter and chaos that children only can provide.

Looking and feeling far younger than our years, we believed we still had the ability to parent one more child. We began to seriously consider adopting, spending two years researching the entire process. We discovered an online support group for people like us called GAARP - Gracefully Aging Adoptive Refined Parents, described as “a forum for adoptive or would-be adoptive parents over the age of 40, who plan to be adoptive parenting into their silver and golden years.” With over 2000 members, we felt reassured we weren’t alone in this unconventional venture, despite the skeptical reaction of some family members and friends.

The minute we saw a photo of Abi's cute little face, with two missing front teeth, we felt he was meant to be our new son.

After the intensive research process, we finally found an ethical adoption agency whose main goal was to find families for older children, not only the healthy baby girls most people wanted. They sent their social worker to meet us and conduct our home study. We were approved and decided to adopt a six-year-old Ethiopian boy named Abi. The minute we saw a photo of his cute little face, with two missing front teeth, we felt he was meant to be our new son.

Our adoption journey was lengthy, involving complicated paperwork and one frustrating delay after another. Did we have any doubts along the way? Yes, definitely. Jay and I talked for hours. Were we truly making the right decision at this point in our lives? One friend tried to persuade us to shelve the whole idea, suggesting that at our age we should consider a relaxing ocean cruise instead. Yet, despite our doubts and fears, we felt compelled to continue the process. I knew, come what may, if we did not adopt Abi, we would always regret it.

My lifeline/support group consisted of other families who had adopted older children. These families were from different backgrounds but they all believed their adopted children were destined by God to be theirs. Our emails flew back and forth late into the night, my anxious questions receiving reassuring answers that only those who had been there, done that, could possibly provide. At last our long roller-coaster journey came to an end. The adoption was finalized and one bright afternoon, we met Abi, hugged him and knew he was ours. Our doubts and fears began to melt away in the warm sunshine.

Life was very different from then on, both for him and us. Older adopted children come with baggage from their pasts and Abi was no exception. Adopting him was certainly the most challenging, emotionally stressful thing we have ever done but at the same time the most significant, life-enhancing and rewarding. There was so much for Abi to learn but he was bright and curious and we learned along with him as we bonded into a family.

People would often tell us what a great mitzvah we did by providing Abi with a loving home. We feel that he gave us a rare gift too, the opportunity to turn back the clock. Suddenly we felt like young parents again, attending PTA meetings and soccer games, helping with homework, reading bedtime stories, singing “Hamalach HaGoel” and “Shema Yisrael” together.

We weren’t sure if Abi was Jewish from birth but were informed he’d been circumcised at one week old. Since we wanted him to be fully accepted by our Orthodox community without question, we decided to have him undergo a halachic conversion. The first step of the process was the hatafat dam brit in the office of a doctor/mohel. The second step of the process – immersion in a mikvah – was far more enjoyable. Abi loved the mikvah – (hey, a small swimming pool!) – and felt disappointed he couldn’t splash around in it longer.

He soon grew accustomed to going to shul with us on Shabbat, participating in the kiddush afterward, even eating the traditional pickled herring with crackers. We enrolled him in the local Jewish school and soon he became more fluent in Hebrew than we were.

However, there were problems too. With so many changes to adjust to in a short space of time, Abi grew easily frustrated when he couldn’t get his way. He did make some friends but dealt aggressively with a few other boys he didn’t get along with. The school had a strict no-fighting policy so Abi had frequent ‘punishment’ days at home. After he picked up and threw a chair at a classmate, we were called into the principal’s office to see what could be done to help Abi. The principal herself was convinced he had ADHD and insisted that Ritalin was the answer. One of his teachers suggested taking him to a psychologist dealing with traumatized children. He gave Abi a battery of tests and recommended a medication to help him calm down and become less aggressive. He also started seeing a child therapist to cope with his past issues. She utilized both play and art therapy with him and it broke our hearts when she showed us a drawing Abi had made of his dimly-remembered birth mother, a woman with tears pouring down her face.

Thankfully, by the end of the school year, Abi’s aggressive behavior had greatly diminished and over the summer we weaned him off the medication, though he continued to see the therapist for another year.

People stared at us, a young, brown-skinned boy with a white couple old enough to be his grandparents. But Abi, a good-looking, captivating child, gradually became an accepted part of our community.

We soon realized that people tended to stare at us, a young, brown-skinned boy with a white couple old enough to be his grandparents. But Abi, a good-looking, captivating child, gradually became an accepted part of our community. Jay and I learned to march to a different drummer as a conspicuous, interracial family, becoming more aware and sensitive towards racism.

Visiting an Ethiopian shul to celebrate the arrival of a new sefer Torah to their community, Jay and I realized what it felt like to be a minority, the only white people within a large group of Ethiopians.

Abi himself quickly learned to deal with racial slurs. When a boy called him a ‘kushi’ (a derogatory term for an Ethiopian) Abi immediately responded, “And you are cottage cheese!”

Sometimes we saw a bit of humor in the situation too. Once when we were discussing healthy food choices, I pointed out that brown bread and brown rice were healthier than white bread and white rice. “I’m brown so I’m healthier too!” Abi pointed out with a grin.

Just as Abi has grown accustomed to our culture, we try to incorporate some elements of his into our lives. We have become friendly with two sweet Ethiopian sisters in our neighborhood. I learned to cook Ethiopian food (thanks to youtube videos) though I still draw the line at eating berbere, a fiery spice similar to jalapeno peppers. When Abi was old enough to understand, we told him about the 2,500-year old dream of Ethiopian Jews to return to Israel, their bravery to undertake that long difficult journey and their fervent belief the Temple was still standing in Jerusalem.

One sunny afternoon Abi and I were walking past a dumpster on our street when he noticed a huge teddy bear perched on top of it. His brown eyes went wide. "Who threw away this nice bear?" he asked, shocked.

"Maybe the kid who owned him doesn't want a teddy bear anymore since he’s all grown up,” I suggested.

"So why don’t his mom and dad adopt a new kid like you and Daddy adopted me?”

For a moment I felt stunned. Abi is well aware of the fact that he is our second-time-around child but we’d no idea how normal a process he thinks this is. We rescued the teddy bear, perfectly clean and in great shape. Perhaps on some level Abi identified with it. Someone else no longer wanted it, but he sure did! Though it’s a huge bear, taking up a lot of space in his bed, he sleeps with it every night. It’s exactly the right size to fill his heart, just as Abi has filled ours.

Growth Through Kaddish
Should I Break Up, Get Engaged or Keep Dating?
Time Is Your Precious Commodity
A Constant World in Flux
Comments
MOST POPULAR IN Spirituality
Our privacy policy