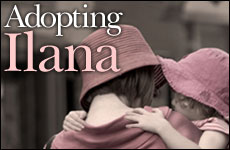 I am racing across the frozen Russian tundra at 75 miles an hour, closer to the North Pole than to any major city. Yura, my Russian driver, is taking me ever closer to Ilana, a two-year-old resident of Apatity's Regional Specialized Baby Home. At this moment, Ilana is not yet aware that in just a few hours, her life – and ours – will change forever. 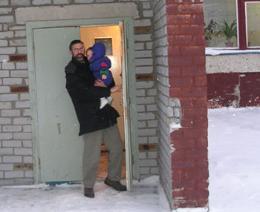 Although nearly 9 a.m., the Arctic January sky is still as dark as midnight. It is eerily quiet. And with Yura focused on navigating the difficult terrain, and my wife, Gayle, back in Murmansk awaiting our return, I am left mostly with my own thoughts.

Am I worthy to be this child's father? Will I be the role model she needs me to be? Will I be deserving of her trust, her love? Will Judaism be as compelling for her as it is for me? If I truly believe that Judaism is a great gift, then do I have the knowledge, the passion, the commitment to pass along that gift to her?

The questions are not unfamiliar. I began to ask them five years ago, when we adopted our son Micah from Murmansk, a mere 100 miles away from the place that has been home to Ilana – until today.

And Micah has answered them in his own way. Micah is the child who came home each day from his Jewish preschool bursting with excitement, who asked to go to minyan with me, and asked question after question about everything he saw there. Micah is the child who could not get enough of Shalom Sesame videos, who at three began to ask if he could visit Israel the way some kids clamor for Disneyworld, and who, during his visit to the Western Wall at 4½, asked God to bring peace to Jerusalem. And Micah is now the child who asks on a monthly basis when we are moving to Israel, who wants to know about Rashi and the Rambam, and who has an overwhelming passion for all things Jewish.

It is because of our own Jewish growth that we first made the decision for our children to undergo an Orthodox conversion. But it is Micah who has convinced us of the absolute truth of the Jewish belief that there are some souls that stood at Sinai, even though they may not have been born into Jewish families. Five years later, it is crystal clear to me why Micah is not growing up in Murmansk, but in our family.

A couple of hours have passed, and we have arrived in Apatity, a grim collection of Soviet-era block apartments that persists for miles. I sit in the orphanage director's office, awaiting the completion of official paperwork. Ilana is confused and upset. She seems to know that something momentous is happening. The orphanage director, in an effort to distract her, takes a Santa figure from her shelf. Although she tries every conceivable way to interest Ilana in the Santa, Ilana just eyes it suspiciously and will have nothing to do with it. The Jewish parent in me silently chuckles.

Is it destiny, or blind chance that she will grow up as an American Jewish child, rather than in a Russian orphanage?

With the paperwork completed, I pick up Ilana and carry her through the orphanage doorway to her new family, her new country, her new life. Is it really destiny, or is it blind chance, I wonder, that she will grow up as an American Jewish child and not in a Russian orphanage? After five years with Micah, chance just no longer seems like a viable option. As we pass over that threshold, it feels like the exact moment in April, 2000 when I carried Micah through a very similar doorway away from Murmansk's Specialized Baby Home.

Meanwhile, Gayle is not waiting alone in Murmansk. Micah is with her. After months of deliberating, we decided that, although Micah is not yet six, the chance for him to see his birth city was too good to pass up. The previous day, Micah had gone back through the doorway of the Murmansk Specialized Baby Home, or as he describes it, "my old school where I used to live." He seemed uncharacteristically calm as he presented flowers to the Baby Home's director, a woman who had been very much a part of his first 13 months of life, but whom he no longer remembered.

But the orphanage was almost exactly as Gayle and I remembered it from five years before. Dedicated, but tired and overworked caretakers trying to attend to over a dozen babies at a time. Children rocking themselves back and forth just to feel some sense of stimulation in the absence of a loving parent's arms. Stark steel cribs crowded together in a room where one-year-olds fell asleep without a mother's goodnight kiss. The same small, expectant eyes looking longingly at us from every corner. The same feeling of sadness as we turn away, knowing that most of them will know no other childhood than this.

Micah strode confidently through those orphanage hallways, almost like a movie star returning to the applause of his admiring fans. And as if on a movie set, doors seemed to open from everywhere as we walked by. Orphanage workers crowded around, gaping at the tall athletic boy whom they last saw when he could barely walk. 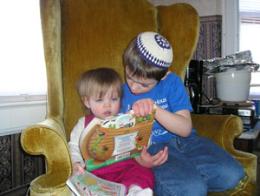 It was clear to me that everyone there saw Micah as an unequivocally Russian boy. And to be fair, on the outside, his features may have made it easy for them to see him in that role. But they could not know that on the inside, this child is thoroughly Jewish. That the change over the past five years has not been merely physical growth, but spiritual metamorphosis.

The spring after Ilana was born, and almost two years before we knew she existed, Gayle had had a dream. It was one of those unusually clear dreams, where there is no doubt about what the dreamer has experienced. Gayle woke up in the middle of the night with a palpable vision of a little girl in Russia crying out "Mama!" and desperately wanting Gayle to come to her.

But now, having so recently been wrenched from her only familiar surroundings, Ilana is desperately insecure and wails whenever Gayle tries to pick her up. Finally, Gayle just takes her in her arms and holds her tight. Eventually the crying slows, and then stops. Eventually, it becomes clear that a mother is holding her daughter, and her daughter feels secure in her new mother's arms. It is no longer a dream.

Just a couple of days later, we are 1,200 miles to the south in Moscow, completing our final paperwork. Micah is making a smooth adjustment from only child to older brother, while Ilana is still taking her first steps in an environment so radically different from anything she has ever known. But through her rapid progress, we are able to glimpse her personal strength, and know how well suited her new name is to her. Ilana, after all, means "oak" in Hebrew.

Friday afternoon rolls in, and we enter Shabbat with a Jewish family at the U.S. Embassy Compound. Saturday morning we go to services at a Moscow synagogue, followed by lunch with the Rabbi's family.

While this Shabbat is distinctively Russian, it is also so clearly Shabbat as we know it. The synagogue service is remarkably similar to the one in Springfield, and Micah is clearly comfortable here. At the Shabbat lunch table sit Jews from California, Massachusetts, Israel, and several cities across Russia. Simultaneous conversations in four languages can be heard. Yet somehow, after ten days of travel in a foreign country, we now feel connected.

Adoption makes us appreciate the precious gift of being Jewish.

And I realize that we are not simply bringing up two children as Jews. Just as the Biblical Ruth described her conversion millennia ago, their souls are now entwined with the God of Israel and with the people of Israel. They, and we, are part of something indescribably greater than ourselves.

Being Jewish is a precious gift, one we too often take for granted. Yet the process of adoption and conversion makes taking it for granted nearly impossible, and focuses us instead on the immeasurable beauty of our tradition. Just as a birth is miraculous, it is as miraculous that a child from halfway around the world should come to be part of a Jewish family in Western Massachusetts. The Talmud implicitly recognizes this miracle, describing the person who raises a child born to another "as if he had actually brought him into the world physically."

But we must choose. We must choose not only whether or not to see it as a miracle, but also what we will do with the miracle once we see it.

One week later, we have returned and are ready for our first Shabbat together in Springfield. In Judaism, the soul is considered as a light, a Divine spark. On Shabbat, it is customary to light a candle for each child in addition to the traditional two. Ever since Micah became part of our family, we have lit three candles. This Shabbat, we add a fourth. Ilana is home, and that light is burning brightly.

Knowing where to start can often be bewildering. The best place to begin is with people who have already adopted. Speak to friends, relatives, synagogue members, co-workers, or anyone who has adopted or knows someone who has adopted. They are in the best position to answer your questions, speak from personal experience, and point you to additional resources. If you do not know any adoptive families, ask your Rabbi or local Jewish Family Service for recommendations.

For those seeking domestic and international adoption assistance, information about adoption, and support groups, the following links may be helpful:

A version of this article originally appeared in the Western Massachusetts Jewish Ledger.

Israel Is Not Enough
What Makes Eli Run?
The Tyranny of Materialism
Science Enters the Mysterious Inner World of Consciousness
Comments
MOST POPULAR IN Israel
Our privacy policy