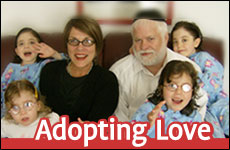 An oxygen machine hums in the foyer of the large apartment. To the right is a bedroom, softly lit, with four beds spread expansively along the walls. I peek in at them -- four young girls, deep in the comforts of slumber. "Naomi is five!" reads a colorful sign on the wall. Each of these girls are a miracle of sorts -- all faced abandonment by their birth parents due to their disabilities but were rescued from an unknown fate by the unconditional love of Yael and Jim Putney.

In the cozy living room, conversation flows easily between us. It is precisely this easygoing atmosphere that enabled Jim and Yael to accomplish the improbable --adopting four special needs Jewish children and bringing them to blossom in the Land of Israel. The four girls -- five-year-old twins Abby and Becca, five-year-old Naomi, and three-year-old Ahuva Dina -- are all affected with a variety of health issues including Prader-Willi Syndrome, cerebral palsy, pulmonary problems, and developmental disabilities. The oxygen tank in the hallway is just one of several interventions in the Putney medical "arsenal" which their circumstances warrant. But from their relaxed attitudes it seems that this is a couple who takes in stride everything they encounter.

"Instead of buying a yacht, we adopted four kids."

Yael jokes that she's on her third motherhood'.. The couple met and married ten years ago, bringing together four and five children, respectively, from previous marriages. He does legal marketing writing and research for a company in Florida. She works the night shift as a technical writer and director of technical documentation for a software company, also in Florida. While most couples in a similar, later stage of life are exploring retirement options, the Putneys are interviewing kindergarten teachers. "Instead of buying a yacht, we adopted four kids," quips Jim.

"Jim always says if you're doing things for the right reasons, everything falls into place," Yael quotes whole-heartedly. Yael had always dreamt of adopting a child, despite successfully raising five of her own. Jim admits to never having entertained such dreams. He was, however, struck by a letter he received from the principal of a yeshiva in their hometown of Miami Beach, Florida which described the plight of several Jewish children who were desperately awaiting adoptive and foster families. Before the memorandum, Jim never even knew that such a strong need existed. This eye-opener, combined with Yael's innate idealism, led the couple to sign up for an eight-week training course from JAFCO (Jewish Adoptive and Foster Care Options) to find out what adoption was all about.

The course was designed to be hard-hitting and realistic, describing in great detail exactly what adoptive and foster parents could bargain for. Although the positives were described wonderfully, the drawbacks were significant and no attempt was made to gloss things over.

The Putneys were an anomaly -- both in the course training and in their approach to adoption in general. While most adoption candidates were incapable of having their own biological children, Jim and Yael were experienced and fulfilled parents. Their motive was purely altruistic, and they set out with absolutely no preconceived expectations of who their potential adoptee would be.

In addition to seeking a child in Florida, the Putneys also filled out a sobering questionnaire with a rabbi in Denver who places Jewish children with adoptive Jewish parents. "Would you adopt a child who might die?" they were asked, and "What level of disability could you handle?"

The call came in on the night before Jim and Yael were scheduled to fly to Israel for a visit. There was a baby in Palm Beach County whose birth parents were interested in giving her up for adoption. The baby's exact health issues were not fully known yet. Would they like to meet the birth father?

Yael describes her conversation with the birth father as very painful. He was emotionally torn between wanting to keep and raise his daughter while faced with the deep-down realization that he and his wife were incapable of meeting the requirements of a special-needs child. After the emotional roller-coaster came to its slow finish, the verdict was clear: the birth parents decided to give over their six-week-old daughter to the Putneys. The legalities and details were worked out, and Naomi joined the family. 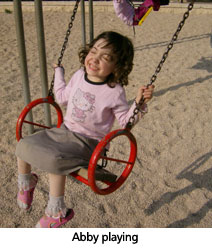 Yael and Jim are open about adopting -- with family and friends, and with the girls themselves. When Naomi became their own, the Putneys sent out birth announcements. The gaiety and joy, however, was marred by the reality of the situation: Naomi was in the NICU on a feeding tube due to a syndrome which inhibits the sucking reflex. After her release from the hospital, Yael painstakingly fed her with a syringe; two ounces of formula took a full hour to ingest.

Shortly afterwards, the clan grew to accommodate twins Abby and Becca, adopted at ages 14 and 17 months respectively. As with Naomi, health issues were a given but the can-do attitude prevailed. It was a little while before they got another call: Another baby was available. Would they adopt a fourth child?

They have been forced to reassess the question: "Would you adopt a child who might die?"

Ahuva Dina recently entered the Putney family, after an exhaustive legal proceeding, and her medical issues have given them a real run for their money. The ten hospital stays she's experienced in the past year are draining, especially now that the nearest hospital is forty minutes from their home! And although Yael and Jim had answered "No" to the question of "Would you adopt a child who might die?" their youngest daughter's medical situation has since forced them to reassess.

There were challenges and concerns, to be sure. Initially, the concern was figuring out exactly what their new daughters' issues were and how best to address them. Many doctors' visits, phone calls, and research came into play in that arena. Additionally, the Putneys needed to figure out how to enter the US Social Services system, a labyrinth of bureaucracy, red tape, and even more research.

Perhaps the most ongoing challenge is the sheer physical energy necessary to get four young girls through a normal day and night. When they lived in Miami Beach, the couple's older daughters helped out, especially in taking the girls to their numerous doctors' appointments. Now that they've relocated to Israel, help is scarcer and their week is comprised mostly of doctors' visits. The Putneys have enlisted full-time household help since bringing Naomi home -- a necessity rather than a luxury; if someone else is doing dishes and laundry, Yael is free to care for the girls. The day-to-day routine is hectic, as can be imagined. 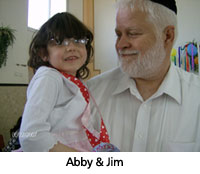 After careful consideration, the couple opted to make aliyah to Israel. Their considerations in undertaking the big move factored in the advantages of the social services offered here. In their experience, most of the services they received in the United States are being met or surpassed in Israel. They receive a monthly stipend that takes into account their multiple children with special needs, and their daughter with cerebral palsy will likely qualify for a mobility grant which will allow them to buy a car. The socialized medical system has been very convenient -- while doctors' appointments were sometimes impossible to obtain on short notice in the States, in Israel same-day appointments are almost always available.

Like delicate flowers turned toward the sunlight, the four girls have thrived and blossomed since their adoption. Their health issues have improved greatly, to the point that one of the girls will be mainstreamed in school next year, while two others are on the verge of being mainstreamed as well. They are being nurtured by the energy that permeates their family -- a beautiful blend of love, compassion, relaxed zest for life, and dreams for a brighter future. Says Yael, "We've learned that while we can't save the world, we can make our little piece of the world better."