Give Me Your Kvetch 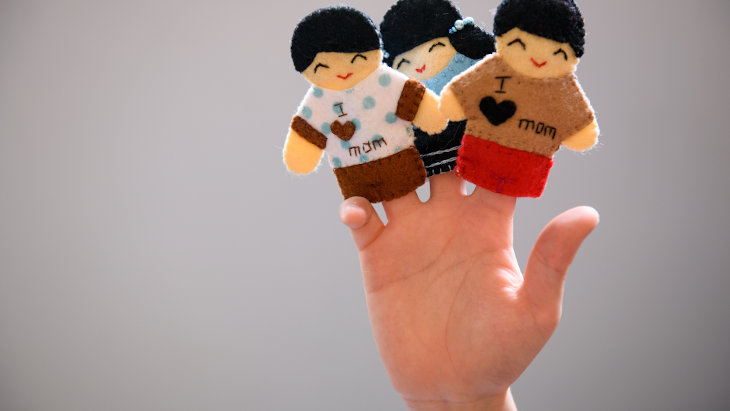 How externalization techniques help me be a better parent.

My four-year-old daughter is on the verge of a meltdown, kicking her feet, pouting, and half-whining, half-yelling. At first, it’s all I can do to keep from rolling my eyes. Enough with the theatrics. I could wait for her inevitable next poor decision or for her to fully erupt. Action, then consequence. Thankfully, I notice that she looks uncomfortable, almost pleading for me to help her avoid escalation.

“Give me your kvetch,” I say, holding out cupped hands, like I am about to accept a toy or unwanted snack.

Mimi hesitates for only a moment before deciding she’s in on the game. She takes both hands and tugs intentionally at something invisible on either side of her face, where tears of frustration had fallen just seconds before. She does a final swipe at her mouth, then carefully deposits her findings into my open palms.

“Flush it down the toilet!” my daughter says, now half-smiling. (I should have known this would be the more exciting option.) I carry the heavy load over to the bathroom and she does the honors of the final flush.

She nods, her gaze still drifting off towards the bathroom, no doubt wondering where exactly we have just sent her “kvetch.” Whether it’s because of the game or the feeling that she’s just emptied herself of irritable energy, she does look more or less herself again.

When I attended graduate school, I had the opportunity to dig into externalization techniques such as these and how they can be applied to play therapy with young children. Ask a child to tell you about his troubles and he will give you a blank stare, but with a pad of paper, a couple of dolls or a board game, you can learn just about everything on his mind. Storytelling and imagination are their healthiest vehicles for processing emotions – and these are the parenting strategies that redeem me again and again in difficult moments.

That’s how I also came up with the aptly named Mr. Hand, which is what my toddlers dubbed my own hand when it was perched on the back of my driver’s seat, like a strange bird. Mr. Hand was the product of a desperate afternoon when I forgot the car snacks I'd promised to deliver upon pick-up; yet my children have asked for return visits and told "him" all kinds of interesting things that I was never privy to hear. Children crave these outlets to creatively communicate their feelings, without the pressure of direct confrontation.

Externalization is helpful for adults, too. It may come as no surprise that my daughter immediately understood tashlich, nodding perceptively as I explained the symbolic casting off of sins into water on the first day of Rosh Hashanah. Similarly, the concept of the yetzer harah, or evil impulse, carries both the ability to relieve us of shame and empower us with a heightened sense of control. If we understand that our negative impulses are not ourselves, we become differentiated from our negative actions – ones for which we feel remorse. My yetzer harah got the better of me, I tell myself after engaging in a conversation tinged with gossip. I can do better than that. My children also do battle with their yetzer harah.

As a child, writing was my gateway through difficult emotions. Before I journaled in the first person, I wrote stories, and every monster or villain was, no doubt, a creative cape thrown over my own inner struggles. One of my favorite writers, Elizabeth Gilbert, encourages aspiring creatives to externalize this way: "Write a letter to Fear," she instructs, explaining that we are merely the observer of our own emotional barriers. "Thank it for its thoughts, and respectfully explain your new plan." The exercise might be compared to a conversation with our yetzer harah: instead of getting frustrated with ourselves for an unwanted thought or impulse, we could simply respond with, "No, thanks." Every time, it's a victory.

We know now that if we don’t seek healthy outlets for negative emotions, in more severe circumstances, our body carries them for us, which can exacerbate or even create physical symptoms. But what if more of us took the time to ensure that our children had positive methods of coping and communicating their experiences – not just to avoid meltdowns as toddlers, but for whatever life might throw into their path?

Separating and externalizing negative forces is constructive, whether we are four and on the verge of a tantrum, or eighty-four coming to grips with an aging body: I am more than this, we might remember. And by remembering that we are more, we can put ourselves back in the driver’s seat and take control.

Jessica lives in northern California with her husband and two children. She works as an academic counselor in private practice (www.JessicaBrenner.com) and is a lifelong writer.

6 Lessons that Made Me a Better Mom

7 Rosh Hashanah Projects to Do at Home with Your Kids

I'm Bored! How to Stop being Responsible to Entertain Your Kids and Encourage Them to Do It Themselves
Megillah Gorilla Saves the Day
Challah Reuben “Grinder”
Big OnThe Little Things
Comments
MOST POPULAR IN Family
Our privacy policy
Aish.com Is Looking for Great Writers