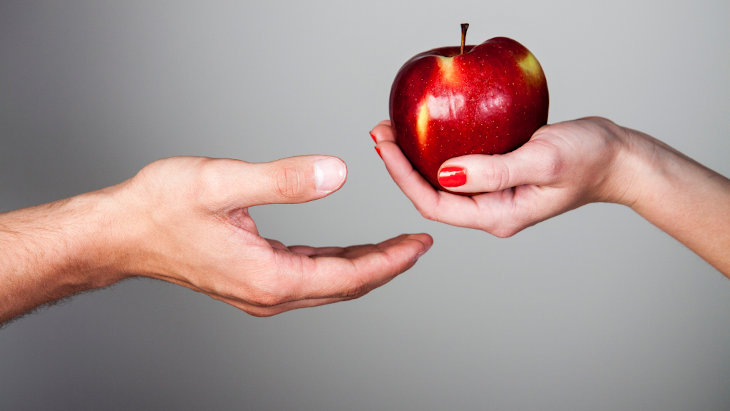 Blaming your spouse and not taking responsibility doesn’t work.

The story of Adam and Eve has an important lesson for men that can help them improve their marriage.

The story begins: Adam was alone and he wanted a wife. He asked God for a wife and God created Eve to be an ezer k’negdo – a helper opposing him or a helper against him. (Genesis 2:18).

What is a “helper against him”? The commentator Rashi explains it by quoting the Talmud (Yevamoth 63a) which says, “If the man is worthy, the woman will be his helper. If he’s not worthy, she will be against him.”

Adam and Eve are in the Garden of Eden. They have one commandment: Don’t eat the fruit of the Tree of Knowledge. Eve eats it and then she tries to get Adam to eat it. At first, he refuses, but she pressures him and he gives in and eats the fruit.Then Adam hides in the bushes.

God asks him, “Adam did you eat the fruit of the Tree of Knowledge that I commanded you not to eat?”

Does Adam take responsibility for eating the fruit? Does he say, “I’m responsible for what I did and I was wrong”?

He does the opposite. He says, “The woman you sent me gave it to me and I ate it” (Genesis 3:12). Adam gave in to something he knew was wrong and then he blamed his wife.

Does blaming his wife enable him to avoid responsibility?

God punishes Adam for eating the fruit and for not using his own judgment.

What is the lesson to help a man improve his marriage?

While researching my book of relationship advice Being the Strong Man A Woman Wants: Timeless wisdom on being a man, I listened to a lot of men who blame their wives for situations that turned out badly. Like Adam, they felt they weren’t responsible because, like Adam, they had gone along with what their wives wanted.

I also heard women complain about their husbands who did this – avoided responsibility by blaming their wives. One woman said it made her feel like her husband was a child as she was his mother. She lost respect for him.

If you try to avoid responsibility by shifting blame to your wife, not only will she lose respect for you, so will other people. Just as God had no sympathy for Adam when he tried to blame Eve, people often have little sympathy for a man who blames his wife for doing something wrong.

Take responsibility and learn from Adam.

Top 6 Articles for Working on Your Marriage

PODCAST: Accepting the Person I Married
Blessing on Chewing Gum
Was Rahab a Prostitute?
Extras In Our Own Epic
Comments
MOST POPULAR IN Family
Our privacy policy