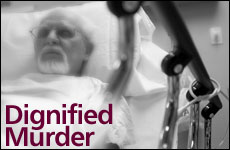 My father survived the Nazis. Now he’s surviving the hospital that tried to kill him.

The doctor visiting my father’s hospital room was touted as an excellent infectious disease specialist. My father had a blasting infection that no one could really find. It didn’t help that he’d suffered an allergic reaction to one of the administered antibiotics, leading him to be pumped full of steroids, which then grew that lurking unresolved infection into some super-bug.

I thought, Doctor, who appointed you as the angel of death, killing off frail, elderly patients? What is life? Do you even know what life is and what it is meant to be?

But I kept my thoughts private and went to report to my family what the doctor had said.

As Jews, we value every bit of life to the last breath.

My family protested vociferously. We wanted our father alive, even with his past strokes and disabilities. His mind and heart were there with us the whole time, and we all wanted that to continue. As Jews, we value every bit of life to the last breath.

But the cards were in the hospital’s hands since my father could not ingest anything orally and we needed nurses and doctors to administer food and fluid. The hospital, cold-turkey, disconnected my father’s IV and food, knowing full well it was against our wishes (which in turn made it against the law). We sent emails to document that it was against our wishes to starve my father. So they hung up the IV and food bags, hoping to fool us into thinking they had him hooked up – but the tubes were not inserted. We sent more emails and they re-hooked the food… but at a slow drip that gave him no nutrition.

My father is not afraid of death. He used to quote King David (Psalms 90:10) that a person can only expect to live 70 years. Anything beyond that is a bonus, my father said, and he was okay if he checked out at age 70.

My father is also not afraid of life. If God gave him life beyond 70, he would fight for that life. It took superhuman strength to fight for his life. His pain was unbearable to see. Yet he fought with every fiber in his body. In fact, one night, unable to see him in that pain, I begged a resident to hook up the IV and to give him some pain meds. The resident replied that my father was not really conscious and wasn’t “there,” so he didn’t need care.

At that point, I turned to my father and said, “I am unable fight them for you. So you must fight for yourself.”

My father, his every muscle straining at the effort, turned to that doctor and let out a long, pain-filled groan. The resident looked shocked and startled. My “unconscious” father had checked in to show he was aware. That night my father got meds and IV.

The next day, with a new resident on board, the fight began again. At that point, we decided we had no choice. We called a transport ambulance and told the hospital we were taking my father out AMA (against medical advice). At least at home we would not be starving him, and, if God said his time was up, let it be a natural death rather than murder.

We got my father into the ambulance, but his breath was labored. It seemed he was having an allergic reaction all over again.

For the next six months he teetered in and out of rehab and hospitals, with countless interventions necessary to preserve his body from the devastation of the maltreatment he received at the first hospital.

My father is still alive, having survived the Nazis and now the infectious disease specialist.

My father is a Holocaust survivor. This is the second time he had to fight off starvation. This time, it was “merciful” doctors and nurses in a facility that gets millions of dollars to – and I quote from their website – “improve dying.”

My father is fighting the good fight. He is still alive, having survived the Nazis and now the infectious disease specialist. I must shout out a warning: Do not simply trust the doctors and hospitals who tell you your loved one is on the way out and should be allowed to “die in dignity.” There is no dignity in being put to death. The only dignity is living to the last breathe.

My father, may he live to 120, is still forging ahead, leading the way to new lessons and awareness in us all.

For those who have a loved one in a similar situation, Agudath Israel of America has set up a division that will help guide, fight and champion the cause of life over death. Visit: http://chayimaruchim.com/

2068
Vayelech 5783: Regret and Repent
Rabbi Sacks: Focus On the Important, Not the Urgent
Put Your Foot Down: Are Human Feet Poorly Designed?
Comments
MOST POPULAR IN Current Issues
Our privacy policy
Aish.com Is Looking for Great Writers