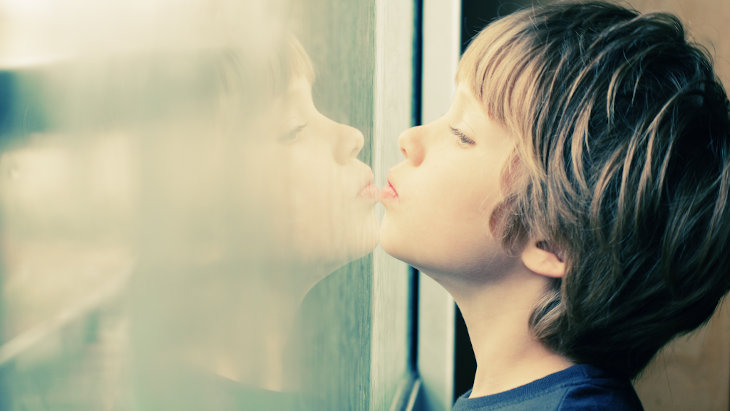 Learning to live in the moment, to focus on the things I can control, and to let go of what I can’t.

Thirteen years ago, I spent Yom Kippur breathing heavily, eating ice chips, and causing intense drama by needing to push ten hours earlier than the on-call hospital staff had predicted. All privacy was lost when my husband received my phone call, ran out of shul and abandoned his gabbai post to witness the birth of our son. Few who were there have forgotten the moment’s melodrama, and the fact that I was a week early surprised everyone we called once the fast was over. The complications of a Sukkot bris over a three-day Yom Tov were intense, but the joy overrode the stress (for the most part) as we celebrated Josh’s entrance into the covenant with family.

Two years later I re-entered shul with Josh in my arms and his recently pronounced autism diagnosis in my mind. I’d gone because that’s what I’d always done on Yom Kippur; it was a mistake.

People approached us with choruses of “Happy Birthday!” wanting to reminisce about his birth which seemed like yesterday to them, but a lifetime ago for me. I was in shock, pain, disbelief, and not yet ready to inform others of Josh’s recent developmental update. As soon as I saw my husband, I pulled him aside and burst into tears. “I can’t be here,” I said, and he understood. I wasn’t ready to come out of the autism closet, nor was I emotionally in a place to reflect on or atone for any past indiscretions. I quickly left and hoped that anyone who saw my sad countenance assumed it was due to the day’s solemnity.

Since Josh’s diagnosis I’ve played synagogue attendance during the High Holidays year by year. My husband can blow the shofar and bought one after this incident so I wouldn’t be forced to make a decision as to whether or not to go until the actual day arrived. In order to save myself any undue aggravation I continued to pay for my seat in the women’s section to allow myself flexibility.

As Josh grew older and his deficits became more obvious and tougher to manage, the possibility of bringing him to shul disappeared.

As Josh grew older and his deficits became more obvious and tougher to manage, the possibility of bringing him to shul disappeared. My husband came home to relieve me so that I could attend at first, but it became too hard. Sitting alone in the women’s section and seeing families increase and advance yearly became a tough pill to swallow. The phone call from the shul’s seating committee every few years asking me to move from my assigned place to accommodate another family’s growth made me feel insignificant, despite the fact that I knew the request to be reasonable and always agreed. But reason doesn’t mitigate pain, and in pain I was. If in order to cope I needed to be alone as opposed en masse, so be it.

As Josh’s thirteenth birthday approached a new layer of complexity was added. We’d already decided not to put Josh through any attempt at a traditional Bar Mitzvah. My husband and I didn’t feel comfortable forcing a child with limited verbal capacity to recite rote Hebrew words that didn’t have real meaning for him. Instead we had intended to throw him a Bar Mitzvah birthday party in school with a personalized book about turning thirteen, what that meant in terms of reaching a new stage of responsibility, and our newfound expectations of him. Just as we had fully come to accept and look forward to the atypical celebration we’d been planning, COVID-19 hit hard. A virtual Bar Mitzvah birthday party would be too abstract and confusing for Josh, so we’ve decided to wait until it’s safe enough for him to return to school and it can be celebrated by his classmates at full capacity.

But all of this drama of Yom Kippur 2020 has given me new perspective. This year when the synagogue’s seating forms arrived in the mail my husband asked if I wanted to buy a seat. For the first time I said, “No. I want to let it go.” COVID-19, Josh’s thirteenth birthday and dealing with his autism during lockdown has actually brought me to a level of acceptance that I couldn’t have anticipated, despite all of the challenges that it entails. It's taught me to live in the moment, to focus on the things I can control, to let go of what I can’t, and to accept that if I must deal with the unknown, it’s far easier to do so without stressing about it.

I don’t believe I belong in shul in a socially distanced prayer service this year. I belong at home with my son who is exempt from performing mitzvot, and thereby unrequired to keep them. What better way to honor the day than to spend it fasting and reflecting while caring for Josh, who is consistently honest, authentic and deemed incapable of sin? His behaviors may not give off spirituality, but he was born on the holiest day of the Jewish calendar when many are reflecting on how they can better themselves and the lives of others. And since Josh is automatically granted God’s forgiveness for his deficits, maybe God can grant me the same grace for my dedication to my son, and forgive my transgressions so that I can continue to better serve myself, my family, and the world at large.

I can’t think of a more meaningful or appropriate way to spend my son’s thirteenth Yom Kippur birthday than that.

Jennifer Berger lives in Queens, New York with her husband, Aaron and their son Josh. A former editor who loves to read and write, Jennifer is currently a stay-at-home wife, mother and full-time advocate for her child.

Forgiving
The Promise Of The Land
Which Chat Are You On?: Parshas Behar/Lag Ba’Omer
Do You Like Slow-Cooked Food? Thank the Jews
Comments
MOST POPULAR IN Stories
Our privacy policy