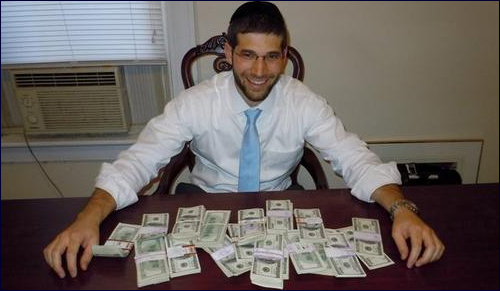 A Kiddush Hashem in New Haven reveals the power of living Jewishly.

In the age of Craigslist, it’s not unusual to find household goods for a bargain. But for New Haven, Connecticut Rabbi Noah Muroff, an office desk he bought through the website for $200 turned out to be an investment with incredible dividends.

Returning home with his purchase, Muroff and his wife found that the desk would not fit through the office door by “a fraction of an inch”. When they took it apart, they discovered a bag containing the previous owner’s inheritance, to the tune of $98,000.

Muroff, a teacher at the Yeshiva of New Haven, told news station WTNH, "Right away, my wife and I sort of looked at each other, and we said, 'We can't keep this money.'" When they called the original owner to return the bag, she was stunned beyond speech; she had hidden the money in the desk and couldn’t find it once it slipped behind the drawer where it remained stuck.

After Muroff and his wife returned the money, they received the following note from the previous owner:

“I cannot thank you enough for your honesty and integrity. I do not think there are too many people in this world that would have done what you did by calling me. I do like to believe that there are still good people left in this crazy world we live in. You certainly are one of them.”

With a single decision that most people probably wouldn’t have made, Rabbi and Mrs. Muroff exemplified one of the highest precepts of Judaism: Kiddush Hashem, the sanctification God’s name through righteous and praiseworthy acts.

When the Jewish people accepted the Torah at Mt. Sinai, we were not only taking on the 613 commandments contained therein; we were also agreeing to act as God’s representatives to the rest of the world -- His PR team, so to speak. Our conduct, when guided by the Torah, is meant to set an example for the rest of humanity for how we should live.

This, by the way, is the reason why we Jews get a lot of attention when we slip up, and why the media works so hard to vilify us. When the press reported the Bernie Madoff scandal, for example, nine articles out of ten included the detail that he was a Jew. It’s an interesting piece of information, but it wasn’t really pertinent to the story. Including it functioned mostly to throw stones at Jews. Every day, the false message is spread across the world that Israel is an “apartheid state,” that we abuse our own citizens and are the perpetrators in crimes against human rights. The rest of the world benefits from our bad press, because it means the bar for behavior is lowered.

But every act of Kiddush Hashem we do has the tremendous power to offset these negative messages and to imbue the world around us with holiness. Every time we make the choice to act with decency, kindness and respect, every time we do the right thing, even when it’s hard, we are showing the world what human beings are truly capable of. And in the age of social media, as we see from the Muroff story, this message can reverberate around the world.

The Death of Phillip Seymour Hoffman